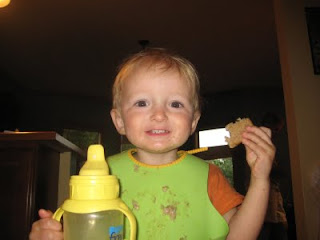 It's funny to me - and therefore to you - that there was once a time when Kitty and I were concerned that Finn wasn't talking yet. This is funny because, by my last count, he hasn't stopped talking in 21 days.

Morning is still his favorite time and he now greets it with a 15-minute rundown of every sound he knows. Here's a typical AM setlist, performed entirely in his crib beginning the minute you open his door:

Encore:
Firetruck siren >
All Along the Watchtower

It's important to note that he ends every morning show with Watchtower. Just kidding. He's not Dave Matthews.
(Ed. Note: Sorry, old folks, I'm sure a couple of those references are over your head. I'd explain them, but it would require me admitting to some things that aren't kiddie-blog friendly, so we'll have to take it offline.)

After weeks of this repetition, he's got the sounds down pretty good. The biggest problem he's got is in choosing the right sound or word at the right moment. It's not uncommon for him to trumpet for a rhino. Or call a helicopter a boat. In fact, all vehicles are now boats. As is the entire body of the Puget Sound. And I don't mean the boats on the Sound; I mean the Sound itself. There are boats EVERYWHERE.

The new favorite, unfortunately, is the word "no." It is the default response to all questions, which is a complete reversal of his early talking days.

Are you hungry? No.
Do you want to go outside? No.
Did you just say no? No.
Ha! You totally just said no! Liar!
No.
Postscript: As I was getting ready to post this, I read today's entry from Friend of the Ninja hamanneggs and couldn't help but note that he totally copied my final theme. Amazing, since I hadn't even posted it. It's probably because Chicago is 2-hours ahead. Yeah. That's it.
Posted by Unknown at 4:22 PM 1 comment: 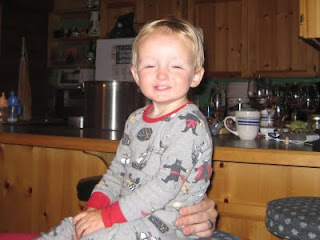 Grandma & Grandpa Parker are visiting at the midpoint of a cross-country road trip, undertaken entirely in their 1957 190SL. They've been regaling us with stories of rest stop mechanical overhauls and stressful mountain climbs, which concerns me greatly, since they're only halfway through the trip. And because that's my future car they're driving.

Since they're old and used to sitting around without anything to do, they offered to watch their grandson this week. In addition to performing their own interpretations of the Finnglish language, my mother has discovered that Finn can smile on command. We had no idea that he could do this, but he was happy to show Grandma when she offered milk in exchange for a smile.

The pic above was taken a few weeks back, when we luckily captured an accidental smile. This is not the smile he's giving his Grandma, but I've included it for illustrative purposes, since I haven't yet been able to capture an on-demand smile. The new smile is mostly just him baring his teeth and squinting his eyes like he's in terrible pain.

Still, it's a much better look than the one I typically get: This is the "keep your hands off my Kitty and Hootie, old man" look.

In his defense, I typically am trying to steal Kitty and Hootie. It gets so cold in our bed and the Mommy is all boney & pointy.
Posted by Unknown at 8:17 PM No comments: 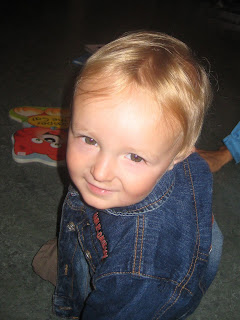 I used to feel bad when a friend's toddler would tell me something and I wouldn't understand what he or she was saying. I felt like I was letting them all down, which is ridiculous. I'm a regular attendee of the Finnglish 101 class and I barely have any idea what this guy is talking about.

It's not like he mumbles. Or is shy about repeating himself. In fact, I think he's been screaming "cow" every 5 seconds for the past month and a half. The problem is that I have no idea whether he's talking about a cow, a car or his underfunded college savings account. I mean, let's face it, his pronunciation stinks.

The trick I used in high school French (cheating off of the kid next to me) isn't working out (Kitty's penmanship is terrible), so I've resorted to trying to focus on what he's pointing at/vaguely looking at/in the general vicinity of to try and define the word based on context. Using these cues, I've been able to piece together the following:
He's got more, but these are the top nouns in the rotation these days. Luckily we don't have verbs or any complicated conjugations to make things difficult. There's only one full sentence that he employs, "Na-na", which can mean a variety of things:
He's also got proper names down:
That last one is his personal favorite, since he breaks into a huge grin whenever I make him say it. Enjoy it now, kid, because she's going to chew you up and spit you out. And I mean that in the best possible way.

My personal favorite, of course, is "Dah-eeeee." I've been getting lots of these lately, as Finn appears to have entered a (sure to be brief) Daddy period. If I can teach him to say "Jeter," I can die a happy man.
Posted by Unknown at 8:58 PM No comments:

The Ostriches and the Bees 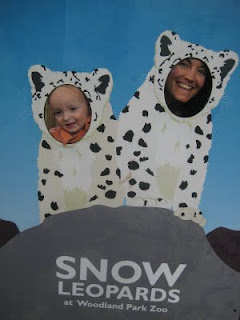 The Woodland Park Zoo is a cute little zoo, tucked away in the middle of the city, with pretty habitats and a laid back vibe. It's a great place to take kids, and in an effort to get these kids to pester their parents into becoming zoo members, they're always trying to market the crap out of their newest cuddly exhibit. A few months back it was the Humboldt penguins, but now that they're dying from avian malaria, the zoo marketing department has quickly pushed those stuffed animals off the shelves in favor of the next big things...

Which are the new snow leopard cubs, as seen above. In addition to photo op cut-outs, they've stocked the gift shops with little leopards and they even had Apple name their new operating system in their honor. These people have no shame.

Since we're zoo members (marketing works!), we shot out on Saturday to spend a rare rainy summer morning waiting with everyone else at the zoo for the little balls of fur to come out of hiding. It turns out that a snow leopard looks like a regular leopard except white with a big squirrel tail. Very cute, but no word on performance or backward compatibility for OS 10.5 apps.

Sorry, should have thrown up a nerd alert before that last one. Won't happen again.

Anyhoo, though we went for the Snow Leopard cubs, Finn got lucky with a biology lesson thrown in for free. Courtesy of the ostriches. I have a movie, but it's really not blog-friendly, so you'll have to settle for this still photo. 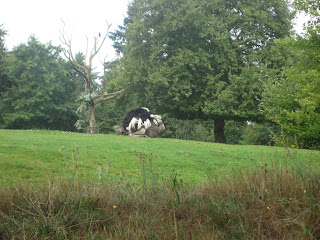 They were doing this right in front of a huge pile of ostrich eggs, which leads me to believe that this bird is the Jim Bob Duggar of the animal kingdom. Luckily, Finn's still too young to ask questions, so I didn't have to make up any stories about how the Daddy ostrich is just cleaning the Mommy ostrich's back, which is nice.

After that exhibit, there was really nothing else to see so Finn spent the remainder of the day jumping in every mud puddle in the zoo. Which probably didn't help his cold. Which potentially hastened the arrival of another ear infection. Which has now led to our doctor recommending a consult with an ENT regarding tubes for his ears.

I blame the snow leopards. Stupid zoo marketing department.
Posted by Unknown at 8:38 PM No comments: