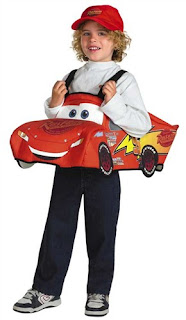 Remember how adorable young Halloween Finn was as a cheetah and a monkey? If not, let's reflect here and here.

This year apparently marks one of those unanticipated milestones: the first non-adorable Halloween. What's next? The first non-alcoholic Christmas?

On an entirely related note, this was also the first year in which Finn could speak well enough to choose his own costume. We ran into some logistical issues right out of the gate, as he informed us that he wanted to be a "birthday." When I asked him to clarify what a birthday looks like, he told me it was a dump truck. Of course it is.

We ended up compromising on the Lightning McQueen outfit pictured above. Of course, that's what it looked like on the website. When it arrived in the mail, it had taken on a slightly different shape: 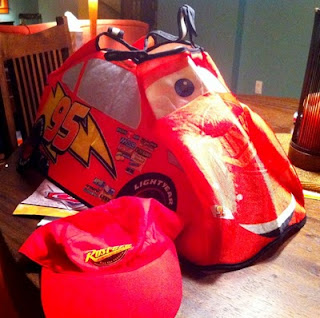 Of course, Finn won't care. He digs the fact that it doesn't cover his face - so it won't impede his beer drinking - and it will result in his acquiring large amounts of candy - half of which Daddy will confiscate in the interests of "safety."

Of course, if I'm going to steal all the candy, I'm going to need a costume too. I've decided that I'm going to go as Finn. It's a really easy costume, so I'd recommend it to anyone. All you need to do is pour a glass of water on your crotch and roll around on the ground for a half-hour screaming "I DON'T WANT TO GO TO THE POTTY!"*

* To be fair to Lightning McPeePants, potty training continues to go well enough that I obviously haven't had enough material to post more than once every two weeks. I even taught Finn how to pee like a man, standing outside. But that story is only noteworthy if the neighbor happens to look out his window. Ah, to be back in the blog salad days of carpet-feces.
Posted by Unknown at 8:39 PM 1 comment: 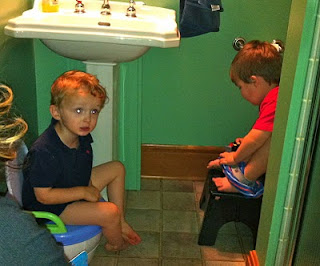 Pop quiz: Which do you think is the most effective means of potty training?

Did you guess A? That was my first guess too. Turns out we're wrong. Kitty's first guess was B, which - while certainly a better option than A - has suffered a ridiculous smackdown in the face of option C.

What was I saying about potty training being hard? I don't remember. Once we introduced bribery via race car, it's been smooth sailing. Way more effective than cookies and jelly beans, which either resulted in counterproductive diarrhea or an overwhelming desire to immediately urinate one's pants for the treat. Applied once every five successful trips to the potty, a little toy race car is extremely effective and much milder on our washing machine than the previously attempted bribes.

Race cars are also a little less, um, fey than baiting using episodes of Glee, which is something that Finn will literally crawl over his own father to watch.

However, while our results have improved significantly since we introduced the potty perks, it's not been an entirely smooth ride. There have been minor accidents, but no worse than a typical college student / retiree. At least we've reached a point where Finn will let us know when he's had an accident - which is more than I can say for those college students / retirees. All in all, we're very pleased with Captain Underpants' performance over the past week.

Unfortunately, I believe that our little Teamster is learning a little more than just how to use the toilet - and is applying his new found manipulation techniques to talk me into reading him a book on the potty in promise of a poop... a poop that never comes.

That's OK. Two can play at that game.

Are those sleigh-bells I hear?
Posted by Unknown at 9:20 PM 1 comment: 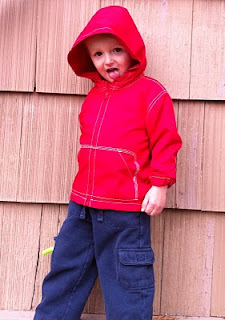 Wow, is this thing still on? Turns out that having Finn's grandparents here last week really cut down on my blog audience and therefore my site traffic, and since I'm only in this blogging thing for the money... (Check my lifetime ad earnings below.)

Speaking of time sneaking away on me, I now recall fondly how quickly the first two and a half years of Finn's life sped by. Fondly, because things do not appear to flow that quickly when potty training. It feels like we've been doing this for years - which is also how I'm sure it feels to you too, since that's been the only topic of blogversation for the last few weeks. In fact, when I look back at pictures from our early days of potty training, I've got a mullet and am wearing MC Hammer parachute pants.

Though it is worth noting that I look good in a mullet and Hammer pants.

These are clearly the times that try a parent's patience. Just when it appears that we're making progress, and our little potty jockey is asking to go to the bathroom, five minutes later he'll insist that he doesn't have to go as he's dropping a deuce in his Lightning McQueens.

Add to that general frustration the fact that he's two - and therefore genetically unable to make anything easy - and even I'm considering that maybe I shouldn't be making so much fun of Kitty for practicing calming/meditation techniques.

For example, the picture above was taken this morning, several minutes after aforementioned deuce, immediately after he kicked the cat dish off the back porch and right before he hit me with his watering can because I hadn't yet showed him the picture (above) that I had just taken.

Of course, being that his veins flow richly with the ridiculously cute and charming Parker blood, he offset all of that this evening by naming a piece of spaghetti "Brenda" and then pointing to his stomach when I asked him five minutes later where Brenda went.

That was pretty adorable. I think I'll give him one more chance. I just really look forward to the days when I don't have to clean poop off his ankles.

For those that are interested, here are the total earnings from those incredibly compelling inline ads you can find on the blog: