Laugh it up, fuzzball 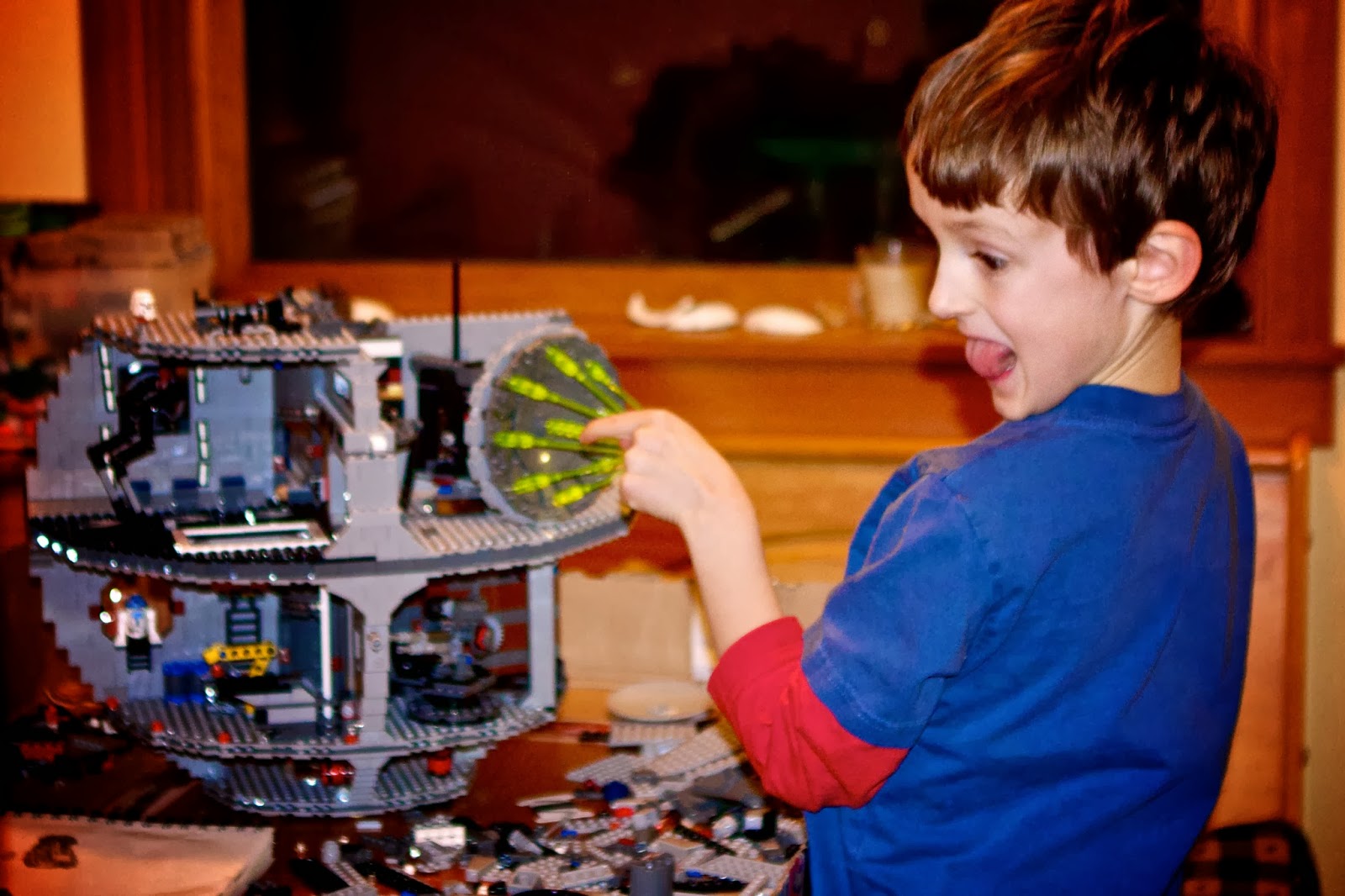 I'm happy to report that after little more than three weeks of on again, off again construction, we have finally finished the Death Star.  The Emperor would not have been pleased with the rate of construction, but I think that Finn and I are pretty happy.

The best part is that unlike the majority of Lego sets that break apart the minute you try to play with them, the Death Star is a fully operational battle station.  Due to its sturdy construction, I don't need to spend my time alternating between putting it back together and screaming at Finn not to touch it.  What does he think this is?  A TOY?!?

Rounding out the new Star Wars collection is a life-size version of the Millennium Falcon, handed down by some friends who apparently were looking to downsize their starship hangar.  It's awesome.  It fires real bullets, has real afterburners, drops awesome quotes at the press of a button, and comes with all of the accoutrements & smuggling compartments of the original.  Unfortunately, the one thing it didn't come with are action figures, which has forced us to get creative.

As cool as it is, there's something not quite right about Woody-From-Toy-Story Solo taking on Doc-From-Cars Vader in an epic battle of good against evil.

But what else are we gonna do?  Talk?  Considering that Finn's idea of stimulating conversation these days goes something like this: "By the way, speaking of pants, do you mind if I take off my pants?", I think we'll make do with this.

"Lightning McQueen, I am your father."
Posted by Unknown at 4:00 PM No comments:

Check this out!  Edie found a new toothing toy under the fridge: 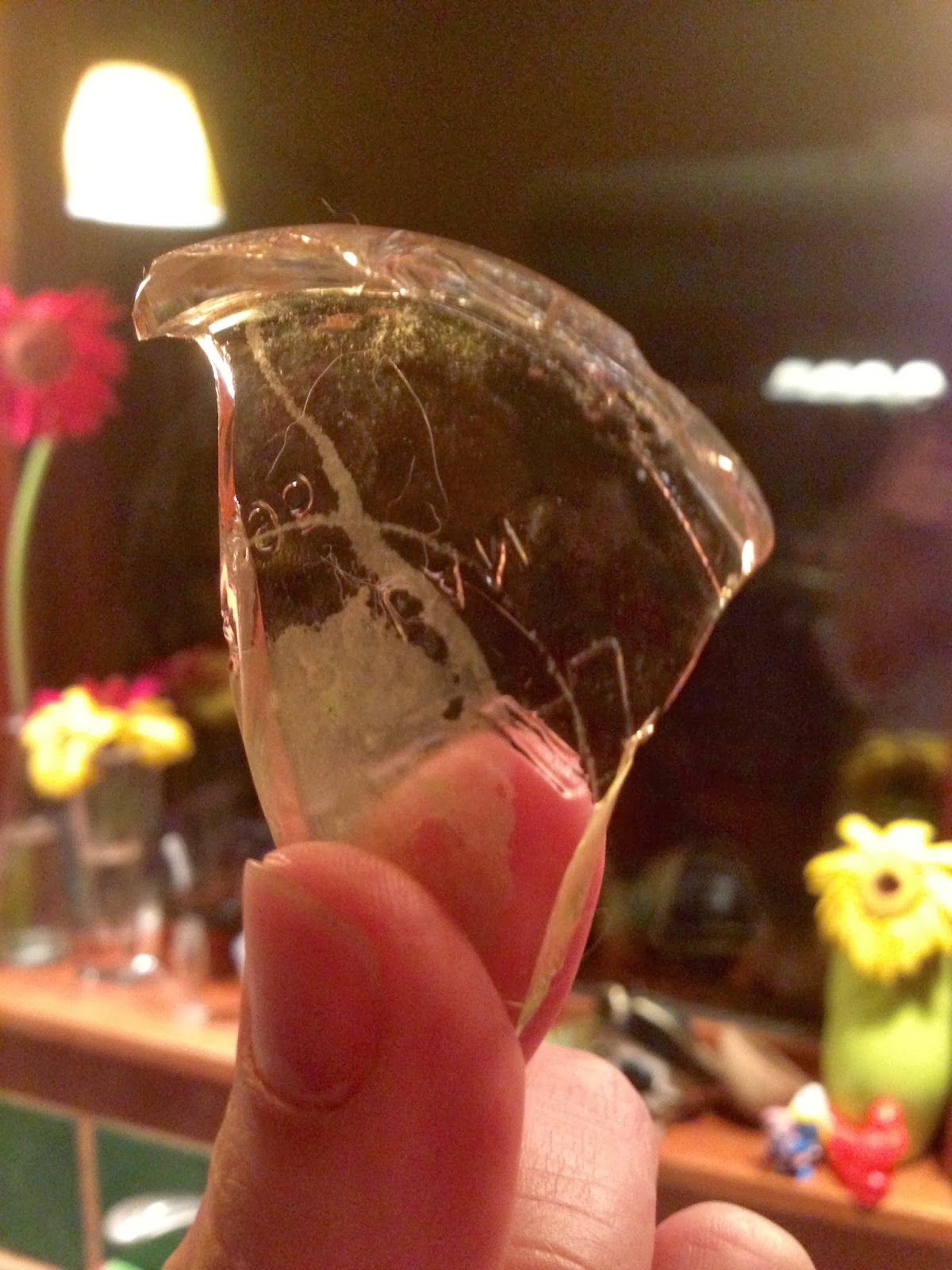 Yes, that is definitely a piece of glass.  Removed from my child's mouth.  The Christmas Chili Vase - the gift that keeps on giving.

And lest you think that this makes us bad parents, answer me this:  would bad parents spend so much time discussing which boozy drinks they were going to order at the Crawfish House that they neglect to notice that they hadn't strapped their child into her highchair and that she now fully slid through it, such that she was being suspended only by her little-bitty chin and her tiny tippy-toes, with only the top of her head visible above the table?

As the people looking on in abject horror from the adjoining table can confirm:   Yes.  Yes, they would.

I'm getting too old for this.
Posted by Unknown at 3:01 PM No comments:

This week has been one of dramatic highs & lows for Finn.  It started out gangbusters.  One of our infantile friends decided to pay back a debt with an enormous novelty check, since nothing that these people do can ever be serious and/or productive.  Since my Chase Bank iPhone app wouldn't let me deposit it (jerks), I signed it over to Finn.

He even happier with this than he was with the $80 in nickels which were used to pay me back last time.  Thank goodness Grant invests so much time, money & energy in kind-of-paying-me-back.  Finn really appreciates it. 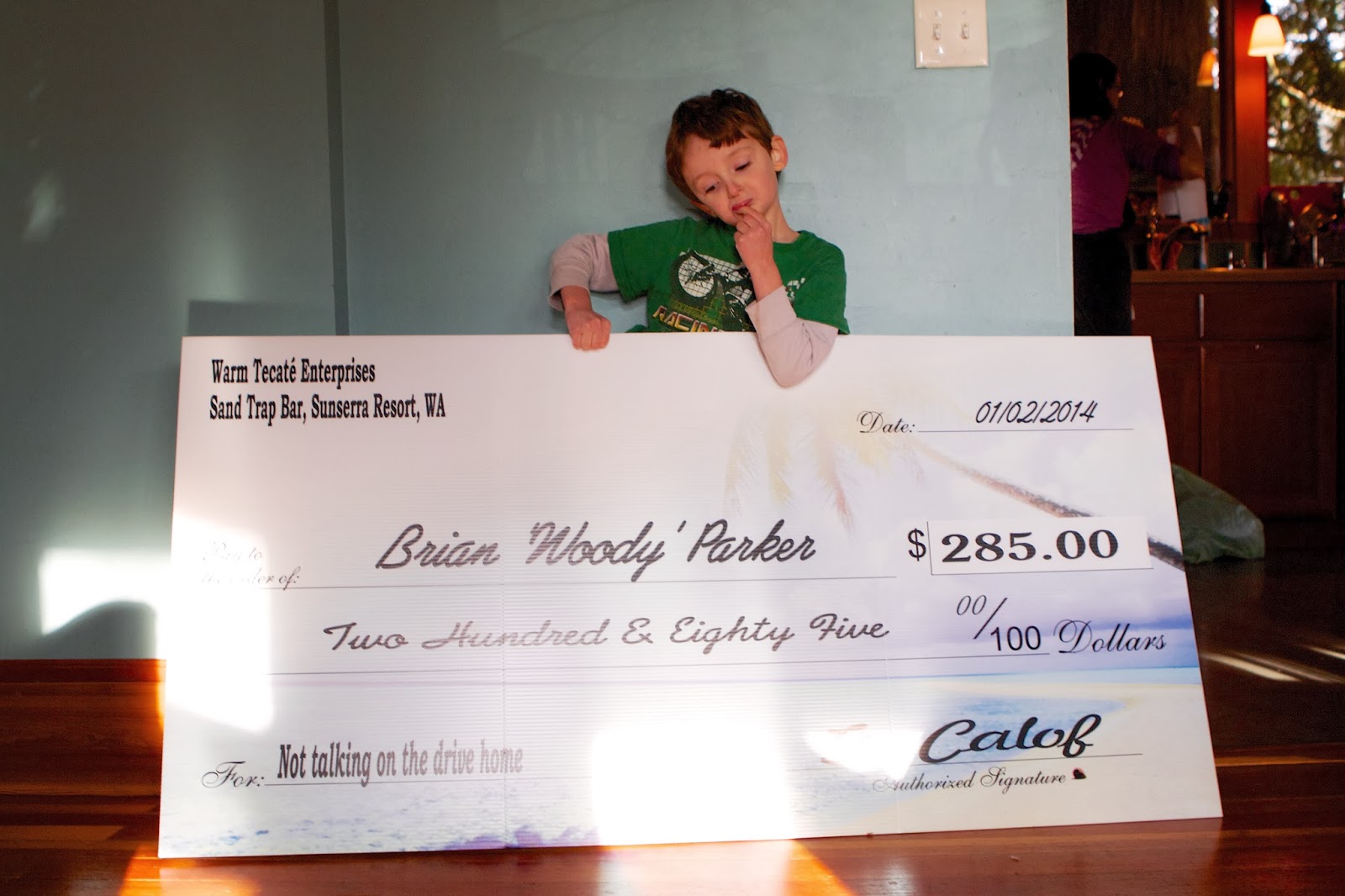 Alas, the good times didn't last.  Before he could spend a dime of that windfall on giant novelty candy and/or Legos, Finn was suspended from the school van with a dreaded pink slip. 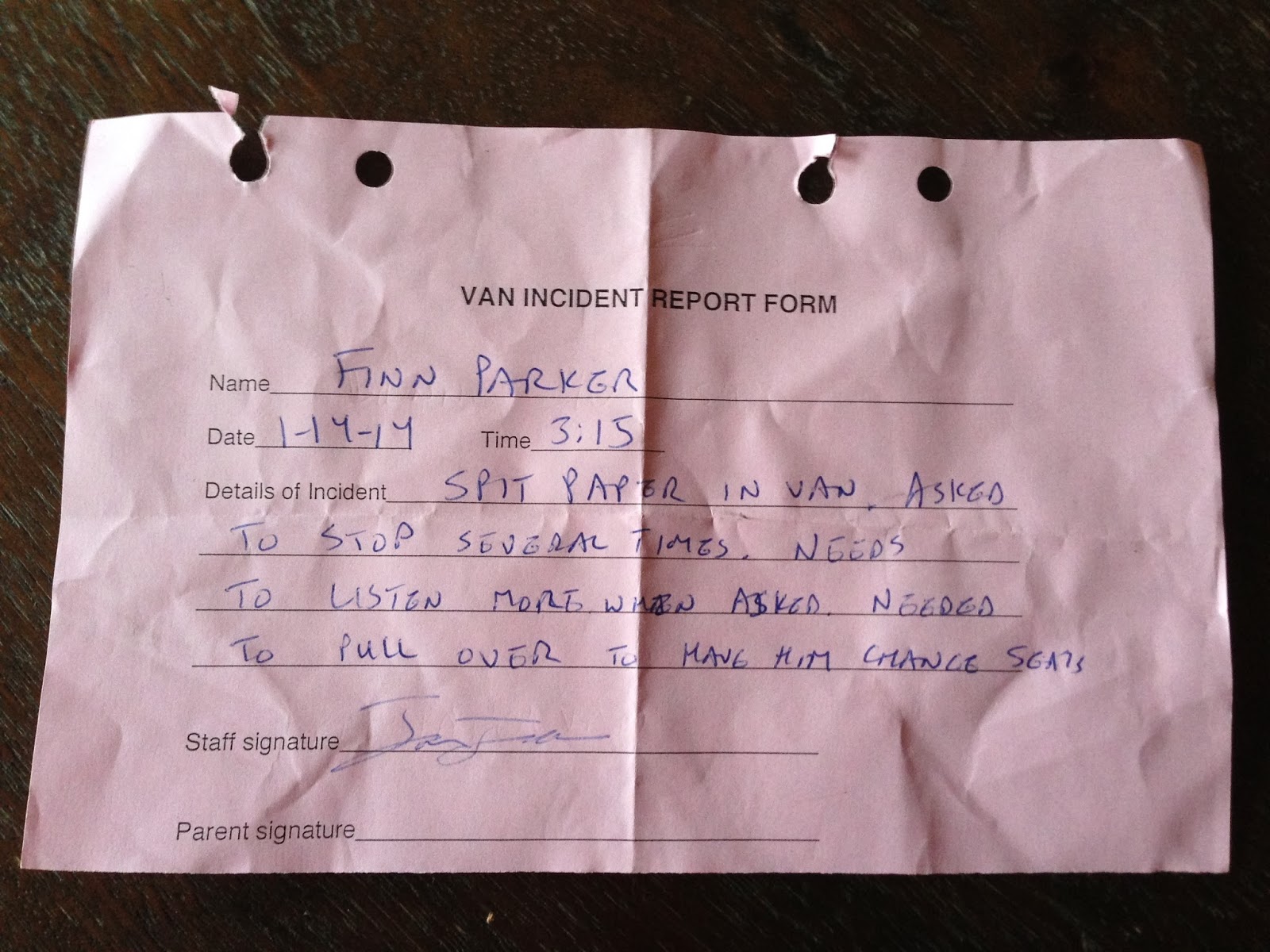 Seems he was spitting paper.  Given that spitting is the primary form of communication in this house for the under-6 set, this is not surprising.  We were willing to give him the benefit of the doubt and pin the trouble on another kid, assuming he was just following along like the little weak-willed child that we're trying so hard to raise, but he was sure to set us straight.  He started it.

That honesty & accountability will serve him well in life, but since the van suspension meant that Kitty had to drive him to/from school, we had to dock him his allowance for the week to pay for gas (he has no idea how much gas costs, so we really stuck it to him - sorry Future Finn).

Good thing he's still got that enormous check.
Posted by Unknown at 2:47 PM No comments: 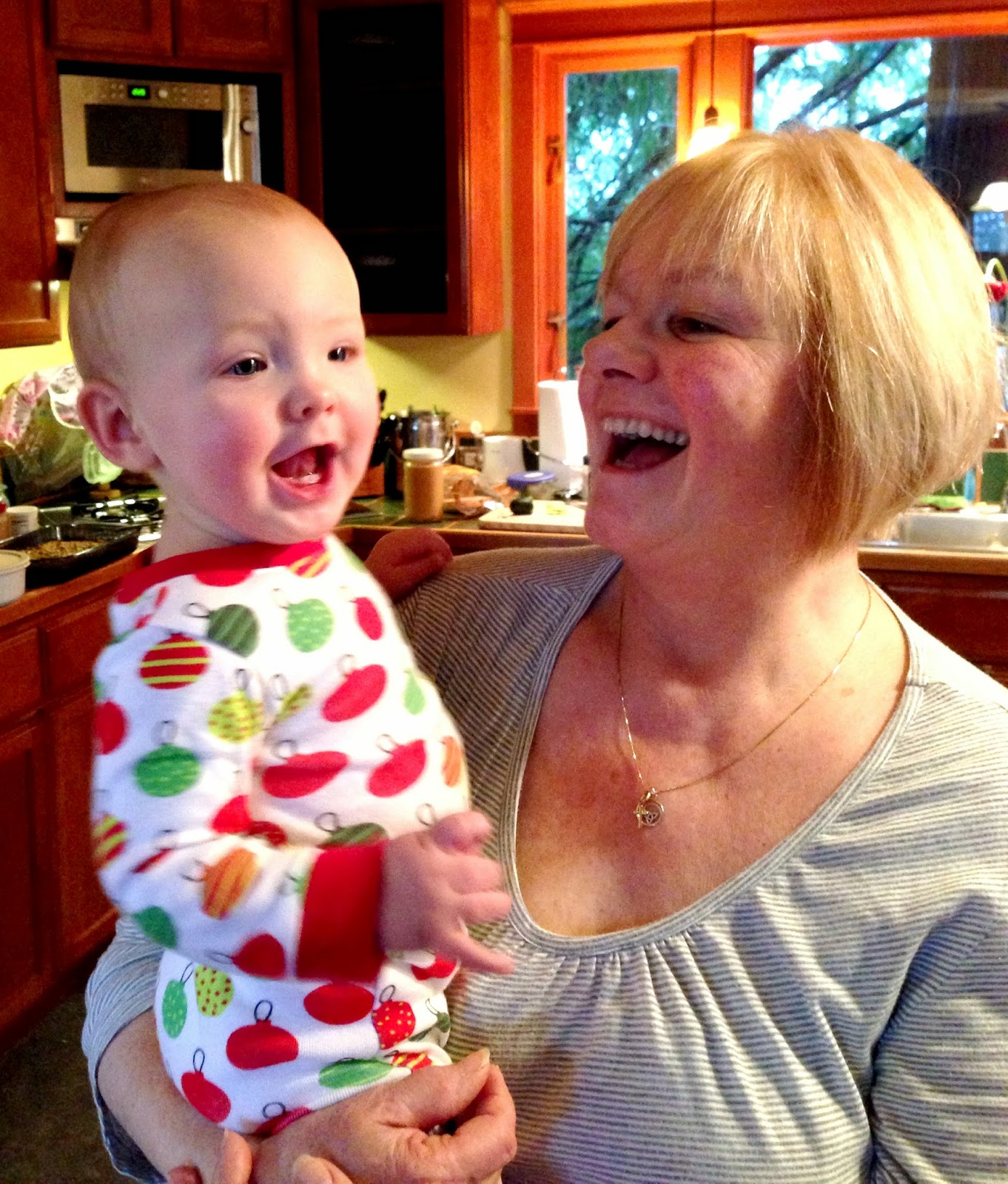 I'm proud to report that we are no longer using cloth diapers.  This is a very happy day, for a couple of reasons:

Point 1 should be relatively self-evident.  For point 2, it's important to note that the reason that we had cloth diapers in the first place was the "environment".  Someone in the household who is not named me or Finn was very uncomfortable with the amount of waste produced by disposable diapers and being the only good-hearted and/or responsible member of this family, insisted upon the eco-friendly option of cloth diapers.

However, there is one thing that this family apparently cares more about than the environment.  And that is the size of Edie's butt.

Once it became apparent that cloth diapers had expanded the size of our daughter's trunk to true Mix-A-Lot proportions, out they went.  Oh my God, Becky, screw the environment.

I would use this as a launchpad to discuss societal priorities if I weren't too busy laughing and/or being happy about no longer having a giant bucket of poop in my house.

Edie may have back, but at least the poop is now in the garbage where it belongs.
Posted by Unknown at 12:23 PM No comments:

At the risk of sounding like an old fuddy-duddy, I must say that chemistry sets just aren't exciting as they were back in my day, where the labels on each container were covered with skulls & crossbones and threats of chemical burns & explosions.  That was awesome.   That's not to say that the packagine for the "Mind Blowing Experiments" that I got Finn for Christmas don't have dire warnings on the packaging.  It's just that the things that we should be terrified most are (in this order):
The lack of warning about the contents themselves do make sense when you see that these mind-blowing experiments will all be performed with the help of such volatile chemical compounds as "Vegetable Oil" and "Beet Coloring".  Crazy stuff.

Finn doesn't care about the lack of imminent bodily harm, however.  Mind Blowing Experiments are currently the second favorite Christmas gift in the house behind the Death Star.  In fact, he is so impressed by this gift that he's developed four rules for conducting experiments in the house.

I was driving as he was reciting them, so I couldn't write them down.  Instead, I had him speak into my phone so it could transcribe the rules into text.  Here is what he said:

The first rule of experiments is that space talking to have to go to space around so you know I'm experimenting right right right what's the second second one is you have to know what you doing is he never know if it's 640 or not it's done so if you don't know what you doing find someway to stop okay their third rule two experiments yet but it's another thing about it is if you're experimenting always use the right ingredients. Or you don't know what will happen. The fourth rule is have fun!


That might look like a bunch of nonsense and you might think that my voice-to-text transcriber is complete garbage, and you might be right, but I'm not actually so sure that that's not exactly what he said.  He doesn't always make a lot of sense.  I seem to remember more about explosions, but maybe I'm mistaken.

But the one part that comes through is the last one.  The fourth rule is in full effect in our house and we are most definitely having some
fun, even if the exciting "Colored Soft Crystals" experiment just resulted in some wet jujube looking things.