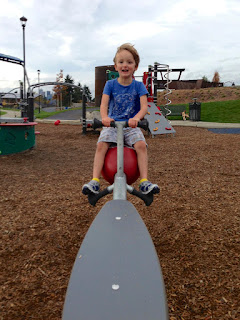 A couple of months ago I did something that I didn't really think was a big deal at the time, but in retrospect I'm not terribly proud of.  I was picking Finn up at Jena's and had double-parked in the alley.  While we were leaving, someone was waiting to get past my car.  I couldn't get Finn into his car seat quickly, so I planted him next to the gate and jumped in the car to move it.

Unfortunately, I couldn't quickly turn around and had to circle the block - which took about a minute and a half.  Finn was still where I left him and some nice old lady was asking him how he was doing.  I waved and grabbed him and she mumbled something about calling the cops, which I laughed off.  It wasn't until I got down the road that I realized that maybe she wasn't kidding.

I decided I wouldn't tell Kitty about this whole thing.  No sense worrying her about kidnapping/child endangerment/busybody old ladies.  Everything was going great until later in the evening when Finn sadly asked me to never leave him on the side of the street alone again.  In front of Kitty.

I'm not sure why he didn't bring that up in the car or ANYTIME before his mom got home, but... that didn't go well.

In the end, both Finn and I clearly have things we need to work on.  I (have been informed that I) need to recognize that the sidewalks of West Seattle are probably not as idyllic as the back roads of upstate NY that I grew up on and need to keep a closer eye on my son.

In the end, giving him the benefit of the doubt and assuming that he really was upset at being left on the side of the road and wasn't just trying to passive-aggressively rat me out, the worst part really is that I scared him.

This bugged me for a while.  Until tonight, when he yelled at me that he wasn't going to be my friend anymore because I wouldn't let him have dessert.

I'm starting to think that maybe next time I need to move my car, I'll take a couple of extra trips around the block...
Posted by Unknown at 8:44 PM No comments: 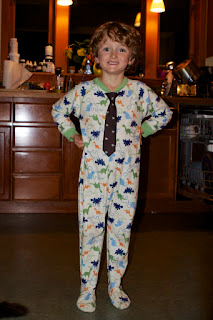 Despite all of his excitement leading up to his new school, Finn had a rough month or so once it actually started.  Getting onto a new schedule was one thing, but he was also having a tough time socially.  Part of that was our fault.  We thought we were being smart getting Finn into Reid's class at school, assuming that would help with his transition, but we didn't really factor into the decision the reality that Reid had a year head start on Finn and an existing set of friends in the class.

The result was weeks of crying about the fact that no one would play with him, that Reid didn't like him and all other types of heart-rending complaints that were difficult to hear, but completely (in retrospect) expected for someone going through a transition like this.  We did our best to let him work his way through this and not meddle, and now everything seems to be back to normal.  He and Reid have worked through whatever massive pre-K rift was coming between them and he seems to be doing a fair job of making new friends - something his teacher helpfully confirmed at our parent/teacher conference this week.

Yesterday, Finn and I were talking about friends and "best friends".  He informed me that he's got six best friends:  John, Reid and Eli from TinyTribe days, a new friend from school, and Bumblebee and Peanut Butter Schwartz.

All good on the first four.  Here are the last two: 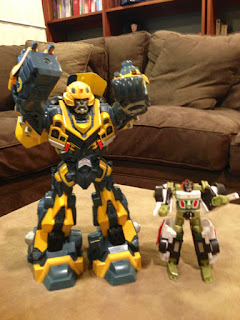 They definitely look like best friend material, right?  Though I am surprised the little guy want to be friends with us after we gave him such an unfortunate name.

Finn is currently in the basement playing with three of his best friends (John, Bumblebee and PB Schwartz).  Five minutes ago, he yelled up asking whether he could take his pants off.

Perhaps that's why he's famous.  Just like Will Ferrell...

Incidentally, when I yelled down that was OK, he immediately asked if John could take his pants off too.  After clarifying that we were all keeping our underpants on, I had no choice but to approve that request as well.

I hope John's parents are ready for his impending fame.
Posted by Unknown at 12:32 PM No comments:

The last couple of months have seen a 1000% increase in the number of pink baby items that I've been asked to review.  This is new for a guy that comes from heretofore male majority households and is taking some getting used to.  Luckily, for every set of lacy booties, there's a Sam Gordon to remind me that raising a girl is more than princesses and ponies.

If you haven't already seen this, check it out:

I don't really care whether the Rookie is into sports or into dollhouses, I'm already thrilled that she's joining the family.  Either way, one thing is now abundantly clear:  having a girl is really going to put a crimp in my misogyny.

And I think I can live with that.

For those of you that get this over email, here's the link to the video.
Posted by Unknown at 2:00 PM No comments:

We tried a new Halloween plan this year:  let Finn eat as much candy as he wants in the hopes that he gets sick, learns his lesson, and we all move on with our lives.  Yeah, that didn't work.  At all.

On the other hand, letting me drink as much beer as I want as I walk around the neighborhood, dropping my empties in random recycling bins, had exactly the expected results. 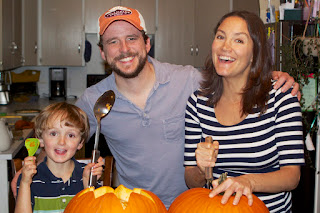 What's more important:  getting a good head start on your Christmas shopping or successfully distracting a four year old from Christmas until the last possible minute?

Kitty and I recently debated this point.  Sanity won out.  We won't mention Christmas until we absolutely have to - which may very well be tomorrow, seeing as how Rite Aid is already stocking ornaments.

I'm hoping that we make it through to Thanksgiving.  Trying to set the stage, I thought I'd check to see if Finn knew which holiday came next.

Well, then.  That does sound nice, if not exactly correct.  Getting any sort of dinner reservation on Valentine's Day is a nightmare and then you just have to hang out amongst other couples who are out on Valentine's Day.  What better day to hang out with family at home eating a nice meal than Valentine's Day?  Unfortunately, I corrected him and told him it was Thanksgiving, after which we changed the subject.

On the way out to dinner, I figured I'd try again.  I'll cut right to the chase.

And so there you have it.  From now on Valentine's Day will include turkey.

Now if you'll excuse me, I need to convince Kitty that the gift of gravy is more romantic than that of flowers or new boots.