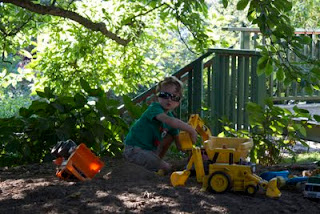 I know that there are only 3 people that still read this blog - and two of them live in my house - so for my other reader, apologies for the total lack of posts this summer.  It is not representative of a lack of caring on my part, or a lack of cute on Finn's part, but simply a lack of time.

In the last nine weeks, I've apparently only spent two weekends at home with the remainder of the time spent gallivanting around the country both with family and without picking up all sorts of exotic diseases. Finn and I did run into Ken Burns in the Dallas airport, and he apparently thinks little kids who travel on airplanes in Superman pajamas are cute, which I agree with, provided there is an outlet underneath the seat to keep the DVD player charged.

I also happen to think that Ken Burns would be cute if he traveled in Superman pajamas, but alas I didn't think to share that with him, just shooting a loud, "Finn, you should be very excited that Emmy Award winning documentarian Ken Burns just complemented you!" over my shoulder as we raced toward the nearest bathroom.  You know, because I'm sure his ego needed that.

We also spent time back in NY, hunting Lyme ticks and learning that a three year old expects more from his grandmother's 65th birthday party than a catered dinner and an open bar, commenting "this isn't a party."  Ingrate.

But mostly I learned that my son is growing up really, really fast, as evidenced by the fact that his increasing whining vocabulary, his ability to argue with me in fully formed sentences and the fact that we no longer get to pre-board the airplane.

However, it delights me to no end that despite all of these things, all he needs to be happy is a big pile of dirt and a couple of diggers.  If only we had thought to serve that at Grandma Parker's birthday party. 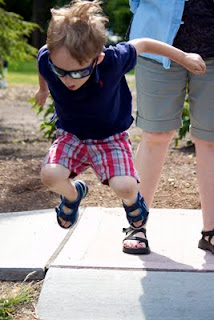 One of those counter-intuitive parenting lessons that I've only recently actually come to appreciate is that yelling at my kid really isn't the most effective means of changing his behavior.  Sure it works in the short-term, particularly if you really want to put a scare into him, but long-term he appears to have developed a yelling tolerance, which results in louder, more prolonged yelling, and so on and so forth until you're screaming yourself blue in the face while your kid continues to happily dump an entire sandbox worth of dirt on your kitchen floor.

The positive discipline disciples will echo this and will tell you to speak in an even voice and use matter-of-fact language when correcting behavior.  The problem is that that approach is extremely unsatisfying.  I've come to really enjoy yelling and just speaking matter-of-factly doesn't feel like it's actually accomplishing anything.  So I've decided to go in another direction.  I whisper.

Turns out that whispering is incredibly effective with Finn.  He'll immediately (usually) stop what he's doing and really pay attention to what you're saying - since I'm guessing he can't really hear me and wants to make sure he's not being offered a cookie.  Regardless, it's become a very dependable means of halting bad behavior without him just tuning me out.

Of course, it helps that whispering really, really annoys Finn in general.  I mean, he really hates it.  I was walking him downstairs this morning, whispering that we were going to sneak up on his Mommy - to which he reacted by hitting me in the face for whispering.  In his defense, he was still waking up and he did ask me to stop whispering... twice... which I didn't.

But that doesn't make it right.  You'd better believe I was upset.  And you know what happens when I'm upset with Finn.

That's right.  He got a good whispering-to.