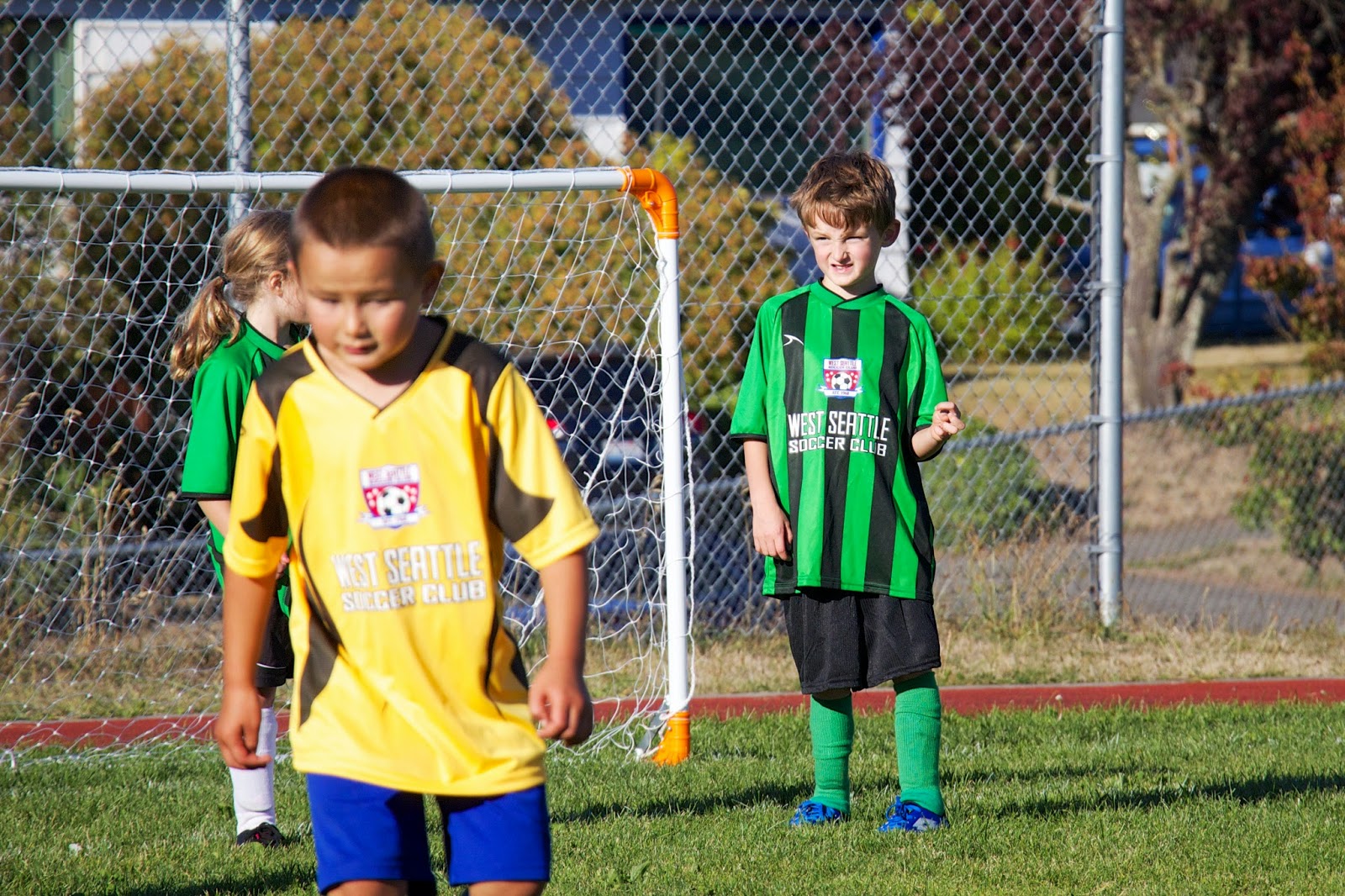 As Derek Jeter plays his last game as a Yankee, I am forced to simultaneously confront two harsh realities:

The former is not news and the latter is not surprising, though it's not for want of trying.  My patented instruction-through-yelling technique may be world renowned, but it has strangely not proven effective in Finn's case.  Perhaps I'm just not yelling hard enough.

And so it was that with a goal of significantly increasing the amount of spittle flying out of my mouth and veins popping out of neck that we signed Finn up for fall soccer.  For some reason, he didn't seem overly excited - as in, didn't want anything to do with it - until I promised that unlike in Little League, I wouldn't be coaching soccer and therefore wouldn't be standing directly behind him for 5 innings, criticizing the way he was kicking the infield dirt.  Suddenly, he was open to the idea.

Lucky for Finn, I know absolutely nothing about soccer - which apparently separates me from every other dad at the field, based on the "encouraging" screams of criticism coming from all sides.   I don't want to sound like a hippie, but man, these dudes need to lighten up.  I've significantly rethought my approach toward sporting with Finn based on just three games and Kitty and I have decided that from here on out, we would be nothing but supportive and would maintain realistic expectations.

Given that Finn has never played soccer before and his initial approach to the game appears to involve circling any ball in play from a distance of no closer than 30 feet and/or carefully considering all balls kicked directly to him for such a period of time as to allow anyone to come along and kick it away, realistic expectations are a must.  Our goal today?  Just kick the ball.  Any ball.  In any direction.  And kick it hard.

And you know what?  He did.  Like six times.  The ball didn't go anywhere near the goal, but he couldn't be happier and therefore, neither could we.  I gave a him a standing ovation as he exited the porta-potty, but for some reason, he wasn't as into that.

At least until it starts raining.  Which should be right about... now.
Posted by Unknown at 8:54 PM No comments: 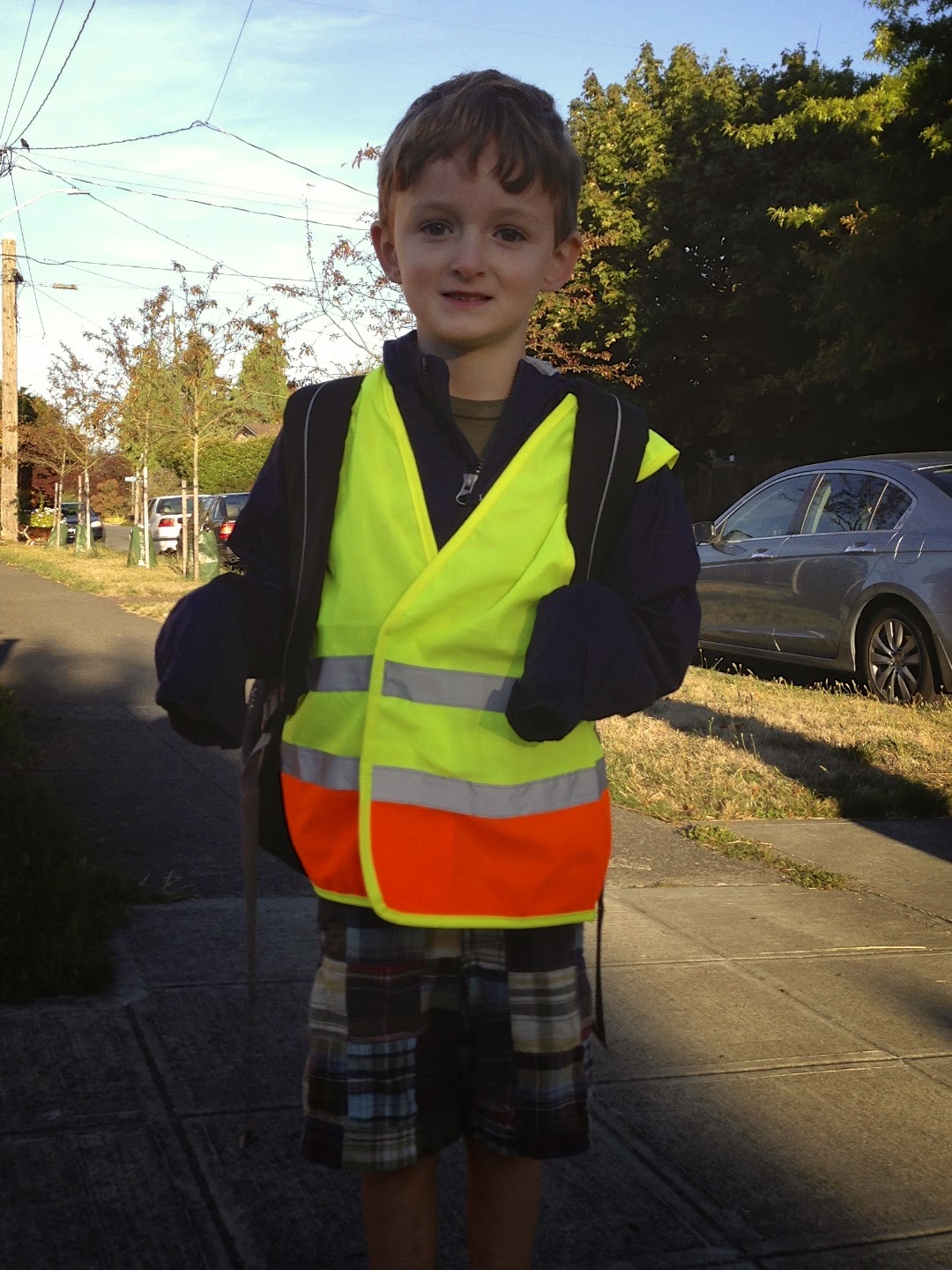 While it's awesome that Finn's new school is only a drunken hop, skip and a broken ankle away from our house, the downside for lazy ol' me is that we're now actually TOO CLOSE to catch a ride with the school bus.  Not only does this mean that Finn is missing a golden opportunity to get bullied by the big kids in the back of the bus while they sit around smoking "My First E-Cigs", it's actually kind of tricky getting him to school.  It's a little too far to walk - what with that one hill and all - and while we can easily drive him, the traffic patterns approaching that school in the morning look like the bridges and tunnels into Manhattan during rush hour.

To avoid starting our morning sweating and/or screaming at each other over our inability to find parking while one of us is kicking the back of the others' seat, we opted for another route.  We're doing the Walking School Bus!

Pros of the walking school bus:


Cons of the walking school bus:
I was ready to totally walk away from the deal on that condition, but Kitty - being a sucker - volunteered us.  The plan is for us to alternate one day a week, but we both know that this means that I'll fake a cold or a leg injury or ebola and Kitty will do most of the work.

Today was my day, so since this was my first, I happily agreed to walk the bus, after Kitty happily informed me that I'd be walking the bus.  And I'm glad that I had that idea, because it was a lot of fun.  Between my wealth of knowledge of Charlie Brown characters and my seemingly inexhaustible inventory of stories about getting pooped on by birds, the kids and I got along famously.  Sure I couldn't stop them from hitting each other in the face with sticks and maybe one of them almost stepped in dog poop on my watch, and OK, I may have kind of forcefully pushed them along a couple of times to keep them moving, but it was still awesome.

As I sat sipping my coffee at the playground waiting for the bell to ring and watching them play, I couldn't help but think of all of those sucker parents sitting in their cars, already on conference calls, that were missing out on the best moments of their kids' lives.

And then I realized how cold it was, right as it began to rain.  As I was walking back up the hill that seemed to have grown 500 ft in the past twenty minutes, I came to the following conclusion:  I think I'll have ebola next week.
Posted by Unknown at 9:41 PM No comments:

Back to the Grind

As my liver was nice enough to inform me roughly 45 minutes before total organ shutdown, summer
is over.  Finn's first day at his new school was last Wednesday and it gives me great pleasure to announce that as of today - 4 days in - he has not yet announced how much he hates school.

In Finn terms, that's a ringing endorsement for the new joint.

I think it's safe to say that we're all eager to get back into a pattern after a whirlwind summer and it would appear that the Unteachable Child is ready to learn.  After fighting it every step of the way throughout the summer, Finn finally decided to learn how to swim on the last day of the pool's season.  On his own.  After refusing to practice reading all summer, he happily read a couple of pages with me tonight.

Of course, the book was about Star Wars and we told him his teacher had assigned it as homework, but there was no complaining.  It was amazing.

And he'd better be ready to learn about Lego Robotics too, because I introduced myself to the joys of public school parenting by lining up before school this morning and throwing some mean elbows to get myself into prime position in the afternoon enrichment program sign-up line, where Lego Robotics spots were going like hot cakes.  I apologize in advance if you're one of the moms that I chop-blocked to beat you to the sign-up sheet, but it had to be done.  I'm just a better parent than you.

To help prep for school, Finn decided to lay some learning on me last weekend on a trip to the dump.  His lesson was titled "Six Things You Need to Know About Garbage... No Wait, Seven Things" and it went something like this:

Things 1-3:  The Three Types of Garbage
1.  Yard Waste - waste from your yard
2.  Recycling - metal and glass and stuff
3.  Garbage - everything else

Things 4-6: The Lifecycles of Garbage
4.  Yard Waste - yard waste starts out in your yard and then is turned to compost and then goes back to your yard
5.  Recycling - recycling starts out as stuff and then is recycled and turned back into other stuff
6.  Garbage - garbage is buried and then turns into a field

I was with him up until point 6, but that's where we had to agree to disagree.  Upon review of the items at the dump, he also rethought point 7.

Even though we weren't exactly on the same page throughout that lesson, one thing is certain, his new school smells a lot better than that particular classroom.
Posted by Unknown at 10:08 PM No comments: