Battle Hymn of the Ninja Dad 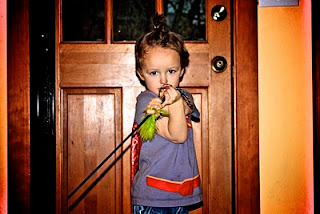 This picture is the closest we've come to raising a Tiger child to date.

Don't get me wrong, I can appreciate Amy Chua's message, I just don't appear to have it in me to lay down that level of discipline - at least not yet. Flash forward 5 years and you may find me screaming: "You call that movement on your fastball? That thing was so flat a Molina could hit it!"

In an effort to toughen myself up, I downloaded a book from the TED series the other day called "Beware Dangerism!" that ties the rise in the fear culture that surrounds child rearing these days to the (lack of) evidence of actual increased danger. The author quotes a survey done of parents, asking them to list their top 5 fears for their children, and then lines those up against the top 5 actual causes of harm:

Based on surveys Barnes collected, the top five worries of parents are, in order:

But how do children really get hurt or killed?
1. Car accidents
2. Homicide (usually committed by a person who knows the child, not a stranger)
3. Abuse
4. Suicide
5. Drowning

In other words, if we spent the time that we currently focus on "stranger danger" teaching our kids how to swim, we'd be in much better shape. Obviously, there's a lot more to it than that and the book covers it all in about 30 pages. An hour well-spent for any new parent.

But the best part I got out of it was learning what the author does in his spare time. In addition to writing another book, "Fifty Dangerous Things (You Should Let Your Children Do)", which reads like a transcript of my brother's first ten years, he also runs a summer camp called the Tinkering School.

If Finn is not dying to go to camp here the summer he turns eight, I'm going to enroll myself. I mean, they encourage you to play with fire!

In the meantime, I fully reject the "Tiger parent" idea that I should be depriving my child of the innocence of youth or the awesomeness of a sleepover party. And if my kid doesn't get invited to that big sleepover? I'll buy him a BB gun to make him feel better, just like my Dad did for me.
Best. Birthday snub. Ever. Thanks again, AJ Roberts!
Posted by Unknown at 8:49 PM No comments: 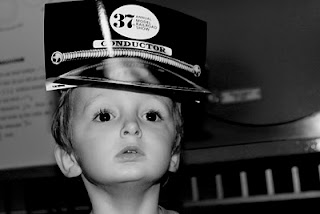 I spent the last week in NY on business, leaving Kitty and Finn alone to their own devices. I got home last night and Kitty split today for a weekend skiing at the cabin, leaving Finn and me to a dudes' weekend.

When I left for my business trip on Monday, last weekend's annual Seattle model train show was still fresh in our minds, feeding his Thomas the Tank Engine obsession and reinforcing for me that his (my) current obsession with the wooden trains will soon lead to a much more expensive and infinitely nerdier hobby... for both of us.

Somehow over the past week, however, that focus on trains and testosterone must have waned for Finn. As I was putting him to bed tonight, he requested that we first "do makeup".

I'm now rethinking the business trip I just had to schedule for the beginning of February. As far as I'm concerned, make-up has a time and a place in a man's life and it's not before bedtime.

It's before a Phish show. Looks like my boy's ready for his first hacky-sack and matching pair of patchwork pants!
Who's got my phatty, toddler-sized, hemp necklace?
Posted by Unknown at 8:17 PM No comments:

Pizza is our Friend 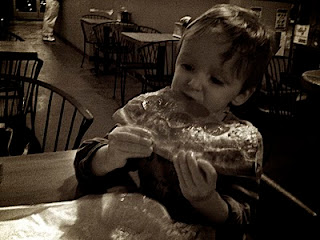 In search of a replacement pair of winter mittens for Finn, we wandered into REI last weekend. If you've never been to the Seattle REI, it's like Disney World for the active set. I get tired just looking at the hiking & biking trails that cut in front of the waterfall outside, to say nothing of the 50 ft climbing wall and hiking boots testing area inside the store. And to top it all off, there's a big play area inside to keep the kids busy while mom and dad spend their college tuition on dry-sacks and imported energy bars.

Lest you think I'm talking about some lame ball pit, here's a picture. It's like Swiss Family Robinson, but with an adjacent World Wrapps restaurant. Except when we were there, given that it was a Saturday morning, there were about 14,000 more kids in the frame.

Thinking I was getting off easy, I took Finn to the play area while Kitty looked for mittens that would actually fit his hands and not flop around, leaving him looking as if his hands had just been crushed in the car door. Rather than play, he spent the first ten minutes standing next to my legs and watching the kids climb up into the tree, which then spit them out a huge green slide faster than a Duggar family rabbit.

After several minutes of cajoling/firm pushing/passive-aggressive threats, he finally consented to climb into the mouth of the beast, ever-so-cautiously - immediately causing a massive traffic jam as eleventy-million less-fearful kids tried to climb over him to get to the slide. When he finally reached it, rather than jump in to escape the madness and slide to freedom, he locked up and started crying.

Unfortunately, from where he was up inside the tree, there was nothing we could do to extricate him, so we had to talk him back down the way he came. You could tell which kids in the tree had siblings, since they were the ones trying to calm him down and offering to slide with him, but he was having none of it.

I'm not sure which was more heart-breaking, the fact that he was so scared and we couldn't do anything about it, or the fact that the kids inside were very concerned about the "little girl" that was crying.

This is all very much in character for Finn. He's extremely shy and cautious, traits that he must have inherited from me and that I'm honestly very surprised are hereditary. If he can inherit that stuff, what other weak traits of mine will start showing up? I really hope he doesn't inherit my laziness.

Or I would hope that if I had the energy. Hoping is hard.

In addition to the shyness, he's also a little afraid of the dark - which he appears to have inherited from his Mommy, and which we're combating with the mantra of "the dark is my friend". This sounds kind of silly and forced when he says it - and is not nearly as true as the title of this post - but I can't judge on the dark thing, since I used to break into a sweat whenever I had to answer a question in class.

It wasn't until I discovered a little known magic cure for shyness that I was able to overcome these issues, but I'm a little uncertain about sharing this secret with Finn.

People tend to frown when you buy beer for a two year old.
Posted by Unknown at 8:54 PM No comments: 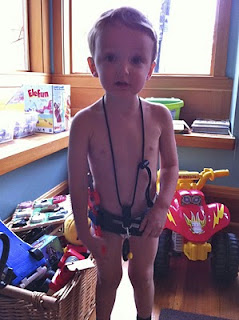 We've had so many repair trucks in our driveway over the last 2 weeks that I'm sure our neighbors thought I was running a Teamster flophouse/drug den/brothel. But as of Wednesday, we're finally all put back together. The sump pump is in, the dishwasher is reinstalled, the garage door opener is working and the laptop is back in commission.

Alas, just when we thought everything was getting back to normal, something new appears to have broken: Finn's ability to speak. Sometime in the last week or so, the little man has developed a hitch in his verbal giddy-up. What used to be "That" is now "Th-th-th-th-th-th-th-th-that".

Should we be concerned? We probably would be if it weren't so comical. It's not like he's Stuttering John on the red carpet, he's just having some trouble getting his brain to catch up to his mouth -- something that both his parents are equally guilty of at times.

I've tried clapping him on the back when he gets stuck, but that apparently only works in the movies. In real life it just makes him fall over.

If it doesn't clear up on its own, maybe we can develop it into something special. He's started jamming the stutter up and down the musical scales like a little Scatman Crothers, which is extremely entertaining. Maybe we can get him onto "X Factor" or "America's Got Talent". And if he does well there, maybe we can shoot for the stars and get him a guest spot on the pinnacle of American television: "Jersey Shore".

Make way for DJ Finny D. That'll be his bio shot above. The Situation's got nothing on his 2-pack.
Posted by Unknown at 4:26 PM No comments: