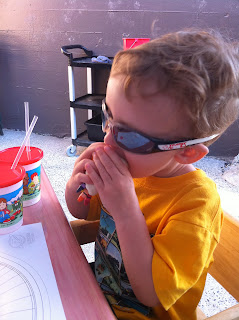 With the bachelor weekend winding down, I'd like to take a minute to inventory the happenings of the last two days:
It's the last one that I'm a little embarrassed by. In fact, I had to sit Finn down before the 4th consecutive viewing of "Twenty Trucks" (currently happening now) to explain that this weekend was special and that we wouldn't be able to watch this many DVD's when Mommy gets home.
In other words, I told him that Daddy is the one who cares about him and Mommy is evil.
Something tells me that that's going to come back to bite me.
Posted by Unknown at 4:58 PM No comments:

When the Kitty's Away

With Kitty in San Francisco meeting our new niece, I sent Finn to the store for essentials. Which apparently means beer and a plastic Toy Story Woody doll.

Don't worry. I wrote him a note and he told me that he got stickers from the cashier.

-- Post From my phone in Bachelor's Paradise
Posted by Unknown at 3:20 PM No comments:

Third Time is a Charm 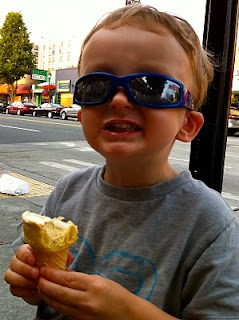 The good news is that we have hard wood floors in our bedroom. That's a very exciting fact to learn, while cleaning up the third household flood in three years.

Unfortunately, I can't blame this one on the cats - in fact they helped me discover it. After we... um, I... inadvertently locked them in our bedroom all day, I figured it would be in my best interest to scout for cat pee. Which is when I discovered Lake Michigan, Jr. in our closet, courtesy of a faulty air conditioner.

Of course, I didn't realize it was the A/C at first and was extremely impressed (and saddened) by the cats' bladder capacities. Once I realized that it was "only" water, I fell back into that comfortable clean-up routine. I've spent the last 2 days ripping up carpet. And drilling out drywall. Again. Good times.

While I've been doing this, Finn has continued practicing his potty skills. He's gotten so good at it that I've only had to change one poopy diaper all week and that's because I took him on a long walk sans porta-potty. He's very good at announcing his bodily functions from the can as they're happening, and very eager to help empty his little potty container into the toilet.

This last part terrifies me, because he won't let me help guide the package home to its rightful place. And he doesn't really have the steadiest hands.

Unfortunately, my fears were realized yesterday as I watched an entire container of poop water gleefully dumped on the bathroom floor. I couldn't help but yell, which made him cry, which made me feel bad. We ended with a nice constructive talk about how it's bad to pour your toilet water on the floor, which was nice, but in the end, there's not enough Lysol in the city to make me feel good about that bathroom floor again.

I'll take another cat flood any day.
Posted by Unknown at 9:47 PM No comments:

I've returned from my cross-country work roadshow directly onto the surface of the sun - where it is still mid-80's inside my house at 10 PM. I don't know which I prefer more, a week spent in hotel rooms, discussing CRM theory with sales managers, or 90+ degree days in an un-air conditioned house.
Actually, that's misleading. I love discussing CRM theory. I'd prefer it over a typical 72 degree day in an un-air conditioned house.
I think there's something wrong with me.
So while I sit here waiting for the temp to go down so I can type something intelligent, here's a pic of Finn pointing out a much more comfortable locale. 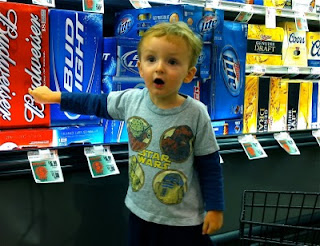 Turns out that loudly telling your son to go back and point at the Daddy sodas at the grocery store while angling for a better camera phone shot earns you some interesting looks.
Posted by Unknown at 9:50 PM No comments: 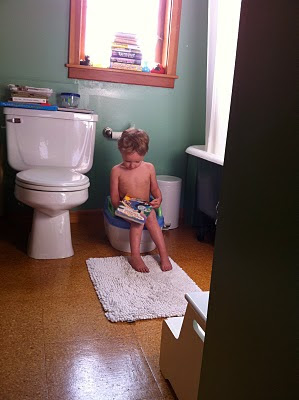 Fun fact: I am often confused with Angelina Jolie. It used to be because of my humanitarian efforts (Feed the Yankees!), my luscious lips and my make-out sessions with my brother, but lately it's because of the fact that I let my son dress himself.

At least, that's the way it stands around here when I let Finny wear his Twenty Trucks shirt - a questionable fashion accessory, to be sure, but his absolute favorite shirt. And since Kitty was at yoga this morning (I'm a coward) and since I'll be out of town for business all week next week, the Twenty Trucks shirt made it out of the drawer today.

To celebrate, we also ate chocolate chip cookies for breakfast.

Turns out this may have been another questionable decision. Finn's digestion has been a little off of late. In fact, Mema - who was visiting earlier this week - greeted me at the door on Tuesday with, "So, Finny was pooping all over the place today."

I chuckled, until I noticed the damp spot on the carpet and realized that she meant that literally.

The poor little guy has had a persistent rash and bathroom issues for the past week, which on the bright side has actually helped the potty training since we can just sit him on the potty for roughly 12 hours of the day.

The odd thing is that he absolutely loves that. He would sit on the potty all day if we let him. Kitty was reading the Potty Training for Dummies book and it contains all sorts of tricks for getting your kid onto the toilet, but none for getting him off of it.

I guess it's better that way, right? I mean, what's the worst thing that could happen?
Posted by Unknown at 10:45 AM 1 comment: 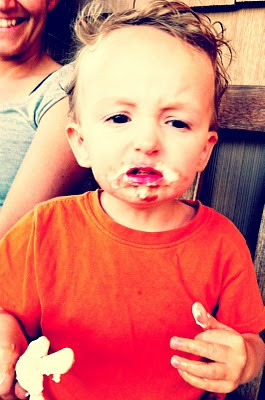 It must be nice being two years old (aside from the crapping in one's pants, though we're working on that). On top of the fact that your Dad will do absolutely anything for you if you whine long enough, it takes very little to make your day.

As an adult, when was the last time you were excited about a letter? Finn gets pumped every time he sees the letter "F".

"F is for Finn!" he'll exclaim from his potty-throne. He will then go on to inform me that "W" is for Woody and "R" is for Dump Truck. I don't correct him. I'm pretty sure there's an "R" in there somewhere and he's so happy to have found it.

Which is probably true, given that I made up the concrete mixer song, but still. I don't remember the last time I got excited about the letter "B" and/or a song involving concrete mixers, but I'm sure I'm just overly jaded. Growing up in the big city of Millbrook, NY will do that to you.

No, when I want excitement I need to do something EXTREME. Something nuts. Something dangerous. Something like SHAVING!

This was the first time I had shaved my beard in roughly 10 years - which only sounds long until you consider that it took me roughly 9 years to grow it. Given that Finn had obviously never seen me without a beard and knowing how excited he gets over the most mundane stuff, I was excited to show him. I shaved it off during his nap and went up to wake him up expecting him to totally freak out.

"Hi Daddy," was his only response.

Disappointed, I made him rub my face and repeatedly tried to get him to tell me what was different. He just looked at me like I was crazy until I finally asked him where my beard went.

"It's right here," he casually informed me. Then he reached down and grabbed a handful of my chest hair.

Apparently, my sparsely populated facial hair migrating down to my chicken chest - while still totally freaking me out every time I walk past a mirror - isn't as exciting as the letter "F" to the Ninja.