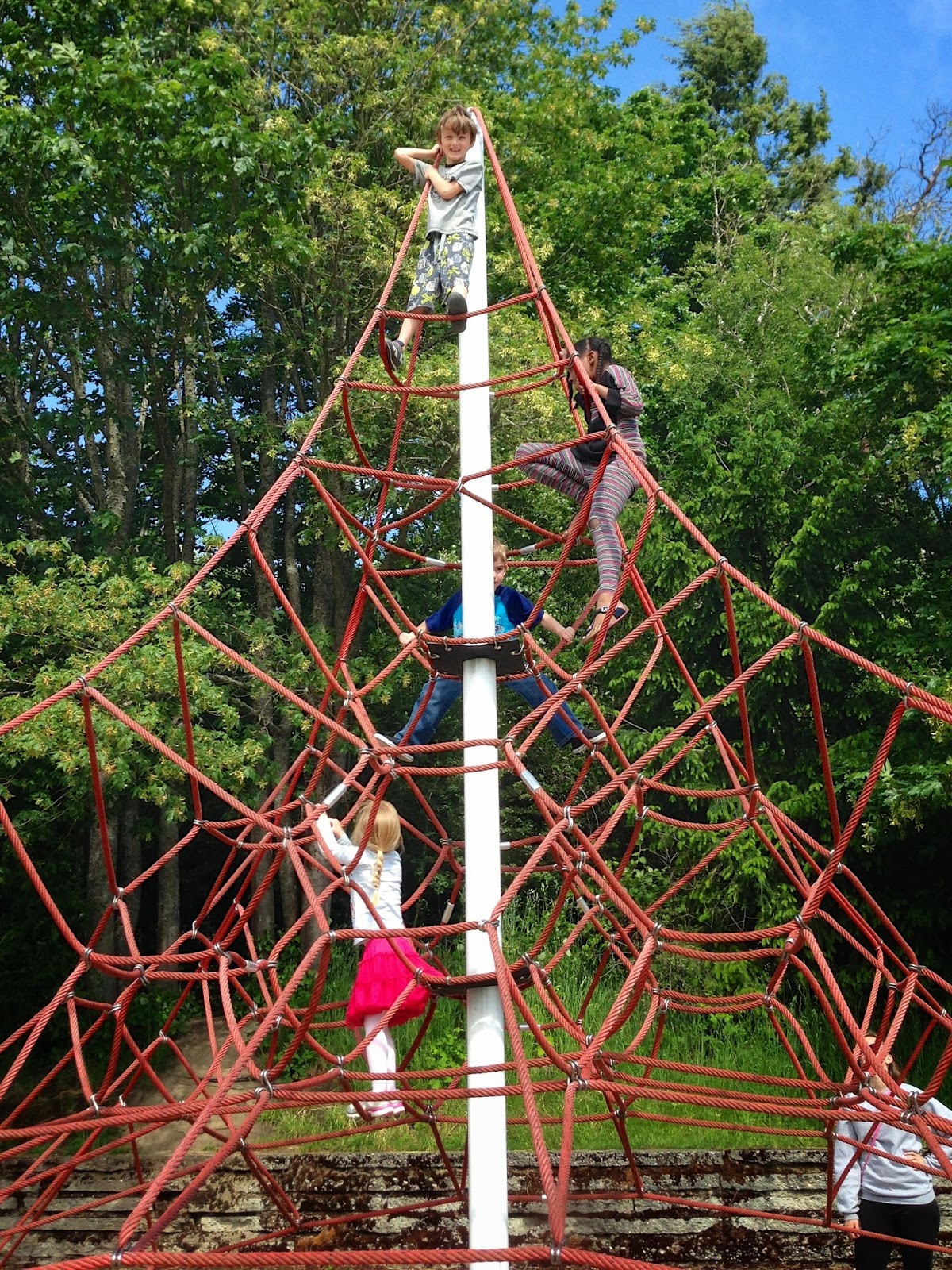 The best part about having a kid in private school for someone as lazy as I am?  My parental participation in my son's education is safely accomplished through the act of writing a check each month.

You say that the children love it when adult volunteers come into the classroom to help them read?  I'd love to help.  Where's my checkbook?

Help delivered from the comfort of my own couch.  I feel so fulfilled.

Alas, with Finn's transition to his new public school next year, my participation toolbox is going to need some new tools.  Kitty has dived right in and signed us up as charter PTA members and started actively meeting parents, volunteering for school events and generally being an extremely good person.

I have joined the charge by reluctantly signing up for the email list and actively complaining about the volume of email that I now receive as I delete it without reading.

But then Finn's school scheduled a big fundraising event, which got me really excited.  Who knew that public schools needed money too!  I thought Joe Taxpayer took care of footing the education bill.  You say that doesn't cover actual human teacher salaries and/or chairs in the new classrooms?  No problem, I know how to do this part!

Before I could whip out the checkbook, however, Kitty informed me that we would be helping by actually chipping in this time around.  She was going to man one of the craft stations and I was to help her cut out 3000 falcon masks and colorful bird feathers for the masks in preparation.

This is not what I signed up for.  By my scientific calculations, cutting a mask out of card stock takes nine more muscles than signing a check.  And that's nine muscles I just don't have.  The event was a huge success and Finn and I got to watch a special Raptor presentation from the nice lady from the Woodland Park Zoo, but I've gotta tell you, my mask-making-scissor-fingers are really sore.

This public school thing is hard.
Posted by Unknown at 9:51 PM No comments: 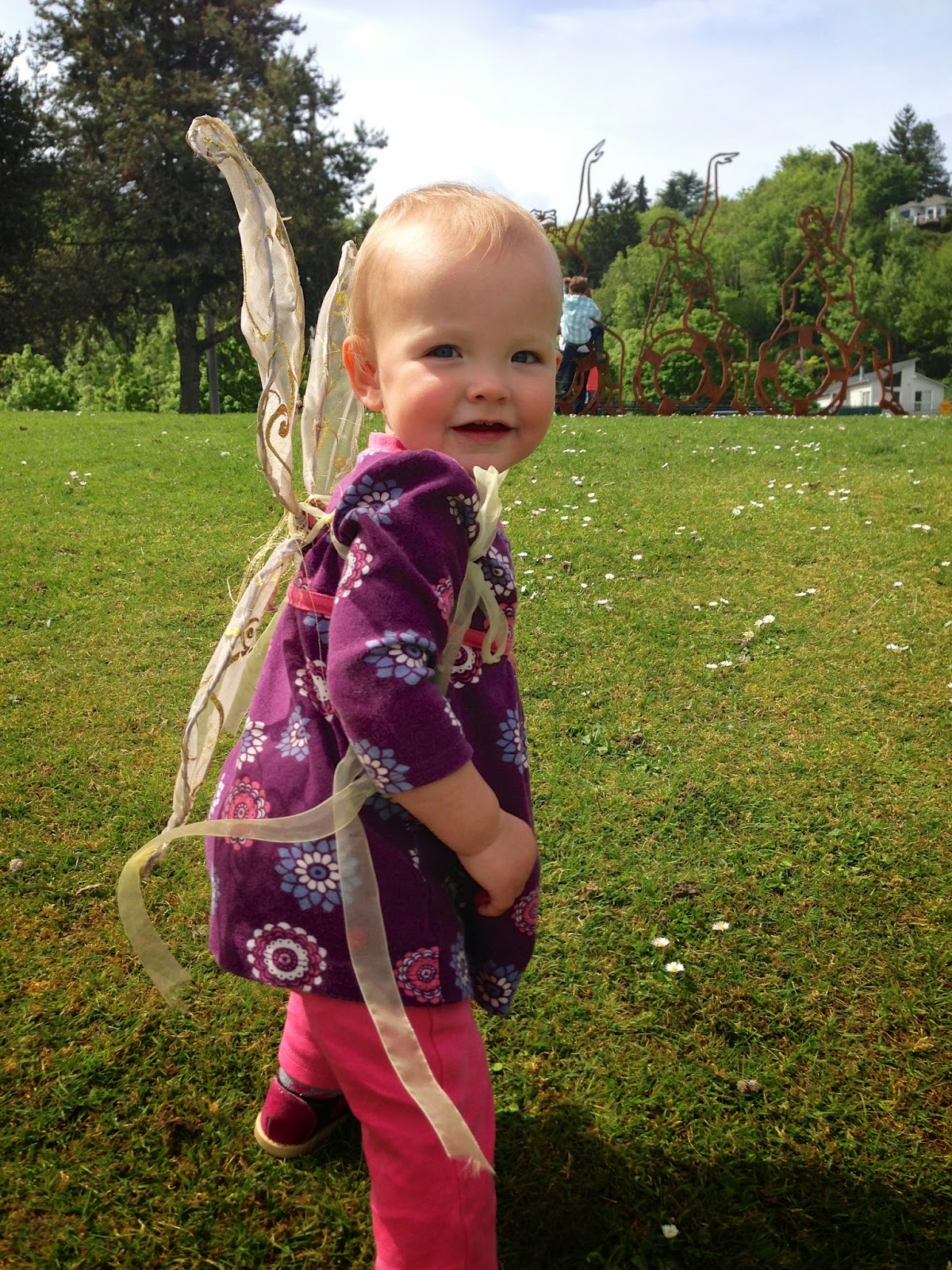 As Edie progresses through each of the major milestones of baby-dom, Kitty looks on wistfully, wishing she could make it all go slower... as I silently high-five myself just out of eyesight.

Don't get me wrong, I know that one day I'll look back at these early days of my (hopefully) last baby and wish that I could have them all back again.  But not today.  Today, I'm all about getting out of the darkness of the baby cave as fast as humanly possible.  This is the downside of having a six year old and a baby.  You know that all of the literal crap that you're cleaning up now goes away.  Sure, it's replaced by new crap - but that crap is figurative, and therefore less smelly.

Let's review some of the big milestones of the last couple of months:
That said, there are some milestones that I'm in no rush to reach, such as the removal of the pacifiers or the crib, since anything that keeps the baby quiet and/or contained is all good with me.  Despite my comments above, I'm also OK with diapers.  Since Edie's a little girl, there's no actual crap - she just poops rainbows and ice cream.  Or at least I assume she does.  I don't change diapers.

That brings the remaining milestones down to the following:
As my boy Roger Murtaugh says on poorly dubbed network television broadcasts of Lethal Weapon, "I'm getting too old for this spit."
Posted by Unknown at 10:35 PM No comments: 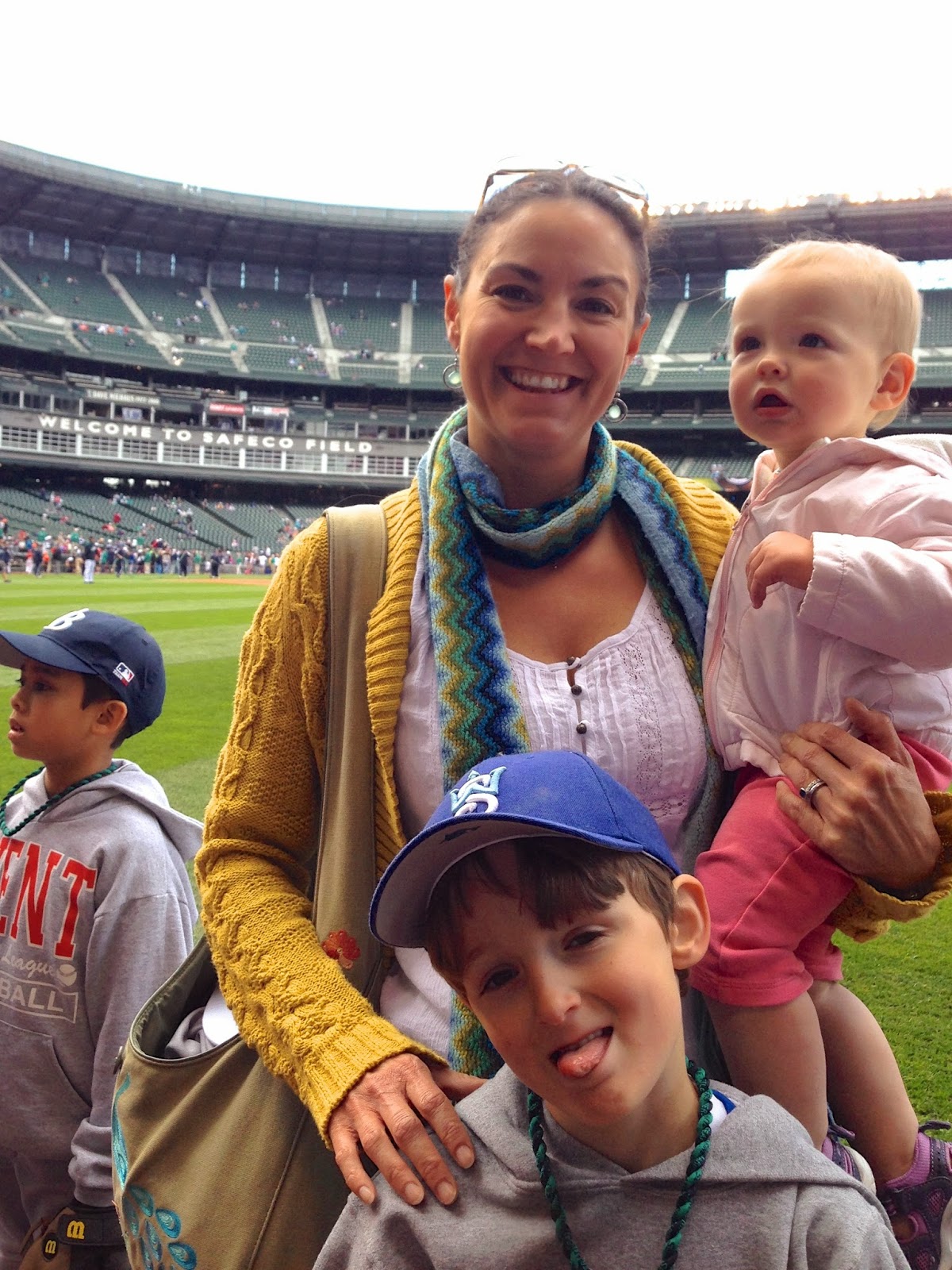 Legend has it that Abner Doubleday, the dude who created baseball, also invented Mothers' Day.  In fact, he invented both of them on the same day, in the exact same spot, in Cooperstown, NY in 1492.   Look it up.

First he invented baseball, then immediately thought of his mom (and apple pie) and so thusly invented both apple pie and Mothers' Day.   And now, tradition has it that all loving fathers are 100% obligated to treat the mothers in their lives to a baseball game on Mothers' Day.

Or at least I assume that's why Seattle scheduled their Safeco Field "Little League Day" on Mothers' Day.  There's really no other explanation.  But Kitty took it like a champ and even pretended that she was enjoying herself as Finn refused to pose for a single nice picture as we toured around the outfield before the game, Edie tried to eat every previously chewed peanut shell off of the stadium floor, and I generally ignored everyone in favor of beer, sunshine and the crack of the bat.

I'm a couple of days late on this, so I know this is no way to make up for a very non-traditional Moms' Day, but HAPPY MOTHERS' DAY to all of the moms out there in baseball-land.  I hope your Sundays were as Robbie-Cano-filled as ours.

If only Abner were still alive to see the fun he had wrought.  Unfortunately, soon after inventing baseball, apple pie, Mothers' Day and cold fusion, he died upon ingesting a combination of Pop Rocks & Coca Cola.

RIP Abner.  I'm sure you would've been proud.

Posted by Unknown at 9:40 PM No comments: 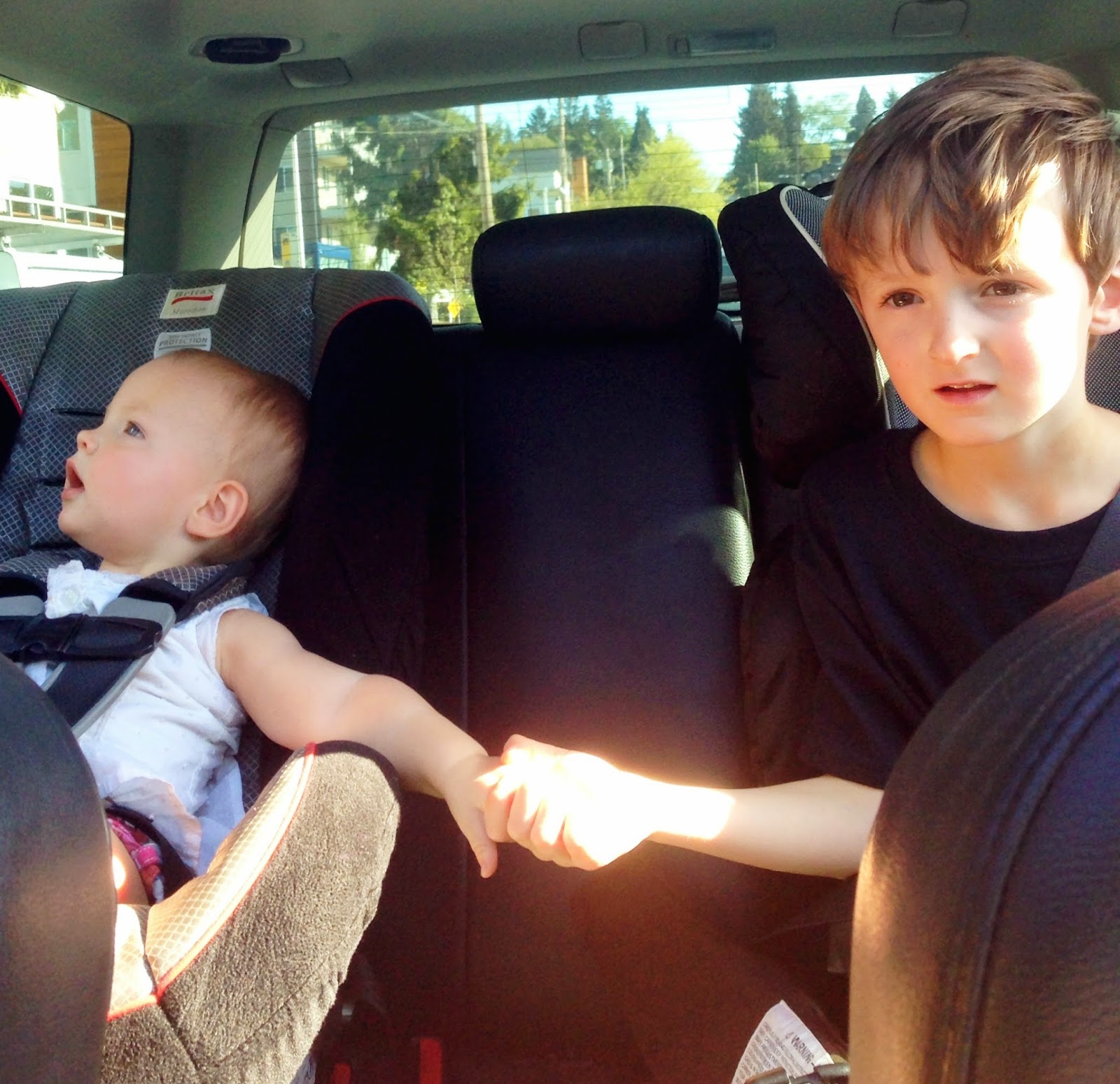 When we embarked on this whole baby-led weaning journey a few months back, I was operating under the apparently faulty assumption that the weaning would be the baby's and that it would be related to a progressive migration from milk to food.

Instead, what I learned that it really means is that you introduce food immediately and then you slowly start to wean your floor of the various tarps needed to protect it from the half-chewed & expelled carrots and you slowly start to wean the baby from the various complicated smocks & bib technologies that you acquired for top dollar from the internet's most expensive bibberies.

Whatever your definition, I'm happy to report that the weaning - while not going quite as quickly as I or the floor would have liked - is progressing.  We put the bottles away about a week ago, along with the dreaded bottle drying rack, which served the dual purpose of cluttering up our kitchen counter, as well as breeding new species of fruit flies.  Edie also appears to be swallowing roughly 60% more of her food these days, which is reducing the amount of cleanup of floor & person.

Unfortunately, she's not taken a real shining to throwing her new & expensive sippy cup technologies at the poor dented & stained floor, as well as at her mother and me, but I'll take that.  It's a lot easier and less vomit inducing to pick up a cup than it is to pick avocado out of the crevices of her chair.

Speaking of disgusting, I'd like to point out the picture above, which is the first photo evidence of voluntary sibling contact.

Not pictured, the booger that he's undoubtably rubbing on her hand.
Posted by Unknown at 10:38 PM No comments: