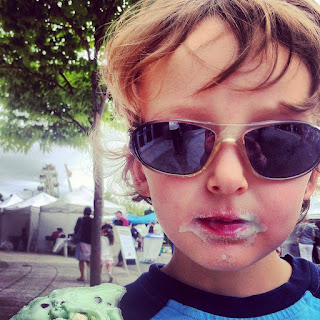 Kitty forwarded me a Love and LogicTM email today on the topic of whether or not it was OK to have a parenting pet peeve, with the following editorial comment inserted:

Picking the nose is my pet peeve. No wait, pooping and then sitting on the bath mat before wiping and then putting on your underwear without wiping…yeah that’s the one.

Don’t step on the bathmat. It needs to go in the wash.

At the time, I was deep in the middle of the first day of a two-day corporate training program called "Fierce Conversations", where one of the topics is "coaching" and the stuff that the instructor is covering could have been pulled directly out of a parenting blog.  The instructor explicitly copped to the similarities between parenting & employee coaching, which didn't exactly leave me with a ton of faith in my fellow corporate monkeys. At least most of these guys actually put their shoes on the right feet.

We haven't gotten to the "no pooping on the bathmat" portion of the training.  I'm sure that's tomorrow.

Posted by Unknown at 9:27 PM No comments:

On the way home from getting Kitty at the airport a couple of weeks ago, Finn pointed out a ferris wheel off in the distance that could only mean a street fair.  This was good timing, since with his four-year check-up, he had finally cracked the magical 42" needed for carnival rides.  In fact, here was his daycare quote on the day of his check-up:

"I'm going to the doctors and they are going to measure me. There is only one doctor man*. He's measuring me for the ferris wheel I think. I think ...like tall like my dad to get on the ferris wheel. I don't think I'm that big but someday I will be."

I'm sure he had Seattle's new waterfront ferris wheel in mind, but that doesn't open for another couple of weeks, so in the meantime, the world renowned Burien, WA Strawberry Festival and Breakdancing Expo ferris wheel would have to do.  Plus there was breakdancing, which is always an awesome way to round out the weekend.  In 1984.

When we got there, it turned out that there was WAY more than just some strawberries, dudes in pleather jackets popping and locking on pieces of cardboard, and a ferris wheel:  there were real rides, that a 42" kid could ride!  Even more amazing:  Finn wanted to ride them!

Now it's important to note that Finn has continued to elevate the art of helplessness to epic levels, still requesting assistance in putting on shoes, pants, and coats daily.  In fact, he's coined entire new genres of helplessness, like "helpful helplessness", where he'll offer to help you, and then immediately ask you to help him helping you.

Given that he had spent the first part of the day shyly avoiding the 'Bubbleman' and the firefighters that were hanging out by the big hook and ladder truck, we had exactly zero expectations that he would want to go on the big kid rides.  He surprised both Kitty and me by immediately zeroing in on the Octopus ride (this thing) and informing us that he wanted to take it for a spin.

The first carnie, clearly low man on the carnie totem pole, was unsure about his eligibility, given that he was almost exactly the minimum height for the ride.  He called over the Chief Carnie, who put his hands out to measure Finn's head, instructing him to stand up as tall as he could.  With that extra effort, he passed the line and we were ushered on.  I'm pretty sure that I'm the only one that noticed that Finn was fully on his tip-toes.  Oh well, what could go wrong if he's maybe not exactly tall enough?  Those are just "guidelines", right?

Here we are trying to get on the ride.  The first thing that went wrong was we both tried to sit on the bottom part.  Which is where you put your feet.  It was really uncomfortable.  As was the fact that everyone watching - particularly Kitty - was laughing at us.  Once we got past that little hurdle, the Chief Carnie informed me that there was a "bit of a bump" at the top of the ride, so it would be best if I kept an eye on Finn, after which he closed the "safety bar" - which was still roughly 3 feet above Finn's lap.

I promptly put all of my weight on my right hand and crushed Finn into the seat.

The loading part was fun, as we slowly spun around and upward, as each car got its share of kids.  We joked and laughed, pointing at all of the little people down in the garbage-covered parking lot and having a great time.

Then the ride started.  Even with all of my weight on him, it was tough to keep Finn in the seat.  Luckily the 7 G's of force helped.  Perhaps we underestimated this ride.  It took about two spins before Finn very quietly requested that we stop the ride so we could get off.

I helpfully suggested that "there's no turning back now, so let's enjoy it!"  He pondered that quietly, periodically again requesting that we turn the ride off.  After a few spins, the ride did stop and Finn cautiously started laughing again, but that was apparently only to allow two (weaker) children off.   In a minute, it started up, and I was once again helpfully offering that "there's no way out but through it!" to my terrified son while laughing wildly in his face.

Somehow, he survived and even laughed with me as the ride finally slowed down for real.  As we got off, the Chief Carnie asked how it was and Finn replied without missing a beat:  "Awesome."

As we were walking away, Kitty asked him if he wanted to ride again, and just as quickly he responded:

I'm sure he'll be a bigger fan of the ferris wheel.

* Incidentally, Finn's doctor is a woman.  He may be getting taller, but he's still got some serious gender confusion issues apparently.

Posted by Unknown at 9:31 PM No comments: 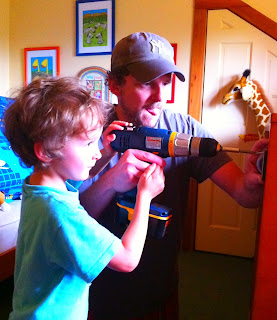 Your patience with power tools (and us) does not go unnoticed! Don't forget to teach Finn how to stick his tongue out while trying to accomplish challenging tasks.

We love you more than a blog post could ever say and will show it by letting you sleep late, taking you to the baseball game and not making you do all the dishes from the french toast breakfast Finn and I are about to make for you!

Happy Fathers day to Grandpa Finn and Grandpa Parker too!! Hopefully you are drinking Bloody Mary's and eating restaurant quality breakfasts today.
: )
Posted by Mommy at 8:34 AM No comments:

Kitty's away on a "business trip" to Vegas this week - or as our wise-beyond-his-four-years son refers to it, "Lost Vegas" - which leaves me in the questionable job of food-provider.  This is an unenviable position, as it's a nonstop terrorist negotiation with a kid who has no interest in dinner beyond it being a springboard to dessert.

With his four-year checkup, he's somehow managed to shoot back up into the 99th percentile for height, which is amazing when you consider that he eats nothing more than half a taco shell on any given night.  And this is only grudgingly as we repeatedly point out that someone that's hungry for "treats" should also be hungry for the other half to the taco shell, to say nothing of the meat and cheese that he's dumped out of it.

One of the parenting gurus that we still receive email from maintains the philosophy of "Love and Logic" in these situations - explaining to the child that the amount of time that you spend reminding him of the fact that you need dinner before dessert tires you out, and that before he can get any treats or special treatment, he needs to replace the energy that he's spent.

This may work in some fantasy land where it's actually possible for a parent to control their emotional response to the request for a cookie repeated every 3 seconds for two hours, but in the real world, that sort of currency doesn't exactly play with a kid that thinks the best way to "earn" money for his piggy bank is to take it directly out of your wallet.

Long story short, I'm not fighting the good fight this week.  We're going to restaurants and we're eating pizza and hot dogs.  And ice cream.  Of course, we're not eating them like father and son, we're eating them like an elderly married couple, with neither one of us talking - me watching the baseball game and him playing Angry Birds on my phone.  Like it should be.

Actually, we did have one conversation tonight.  I asked him if he knew what all the sports were on the TV's at the Wingdome, which then turned into a conversation about his favorite sports.  He replied that he liked them all and listed off a bunch.  He neglected to mention car racing, so I asked him if he liked that too.  He informed me that car racing was not a sport and that sports "only have guys with balls."  Sorry NASCAR fans, you heard the man.

Of course, this is also the athlete that insisted that we hold hands while jogging home, so feel free to take that comment with a pound of salt.

Ed. note:  For what it's worth, I did clarify with Finn that sports are actually played by both guys and girls, and that we know lots of girls with balls.
Posted by Unknown at 9:23 PM No comments: 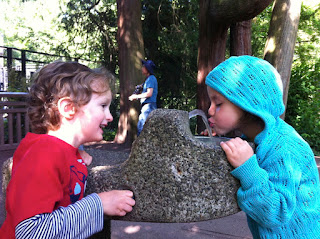 Finn's daycare quote for the day:


"I can only say one thing, I like being alive.

Not sure where that came from, but not bad if you've only got one thing to say.  If you're keeping score at home, the list of things that Finn likes now includes:

To celebrate this newfound love of life, he spent his evening jumping up and down popping packing bubbles with his feet until he fell over laughing.

Of course, later he spent the evening crying because we wouldn't let him watch TV after he attempted to rub his feet all over his mother's head at the dinner table.

Perhaps the key to a happy life is exceptionally poor table manners.  I'll have to take that into consideration.

This could be worth some money...
Posted by Unknown at 9:31 PM No comments: