Ed. Note:  Apologies in advance that the next couple of Christmas-related posts are going to be very Finn heavy, because let's be honest, babies are pretty useless at Christmas.  They pull fragile crap off the trees, threaten to ingest electrical lights and are constantly disappearing into the garbage bag full of discarded wrapping paper.  At least when I do that, it's because I've had too much Egg Nog.  Edie doesn't have any excuse.  We'll get back to baby stuff in the new year, I promise.

Finn has been pretty clear about what he expected this Christmas.  Unlike previous years, where we were forced to intuit what he might want based largely on what we want him to want (hello, large art easel which serves no purpose in our house other than to ensure chalk covers everything within a 20-ft radius), he has been adamant for at least three months now that Santa has only one priority:  the Lego Death Star.

This was unfortunate, not because I wouldn't want the Lego Death Star (Have you seen that thing?  It's AMAZING!), but because it is apparently made out of gold, based on its price.   Price was not a negotiating tactic with Finn, however, as he insisted that Santa could make it for free.  I disabused him of that notion with a three-hour lecture on the intellectual property of both Disney/George Lucas and the Lego company and the cost of licensing that would still need to be paid even if Santa did somehow have a way of fabricating the same level of quality brick that Lego does (doubtful) - but he was not dissuaded.  I need to work on that speech.

Terrified of setting this sort of precedent for Santa, we decided to drop to our knees and beg family to help finance this planet-destroying plastic behemoth and luckily family came through.  I wasn't going to make this easy on Finn, however.  You know, on principle.  As we wrapped all of the presents on Christmas Eve, I purposely didn't label the Death Star and tucked it in the back, intending to pull it out only once he had been reduced to tears.  That's a surefire way to make him appreciate his stuff.  Break his heart, then deliver.  I'm a hero to my children.

On Christmas morning, Finn predictably went looking for the Death Star and as he opened present after present, got increasingly confused.  He did ask about the big present in the back, but I told him it wasn't for him.  And he bought it.  Until he was done opening the presents, then he came up and asked where the Death Star was.

"I don't know, dude.  I told you it was expensive and Santa probably couldn't afford it.  Looks like he just couldn't make it happen this year.  I'm sorry buddy, but we don't always get everything we ask for."

*sigh*  Next year, I'm going to need to up the ante if I'm going to break his heart.  I need to leave his prized present in the garage.

But since I wasn't that smart this year, here's what True Love looks like: 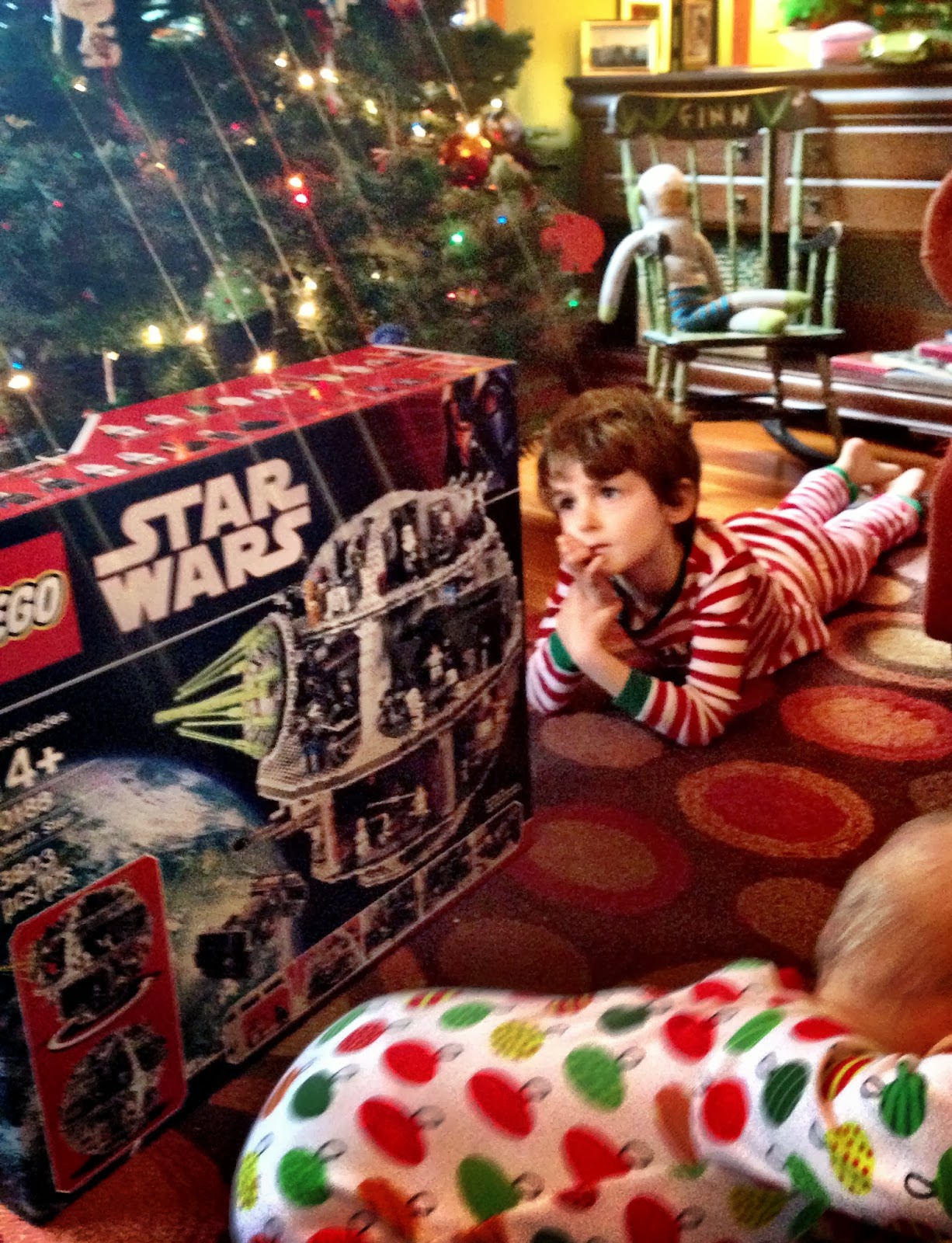 Of course, this picture was immediately followed by the stunning realization that the Lego Death Star has nearly four thousand pieces, a 240+ page spiral-bound instruction guide and will take roughly four years to put together.  Finn has already tried to pawn this off, telling me that it would be "OK" if I wanted to put together the whole thing.  Nice try, buddy.

And so it was that I Edie-proofed our entire breakfast nook to act as the Death Star construction zone.  Once that was done and Finn and I decided to get to work, he looked at me and said:  "Daddy, I'm a nervous wreck."

When I was done laughing, I had to admit that I was too.

And that's what Christmas is all about.
Posted by Unknown at 5:48 PM No comments: 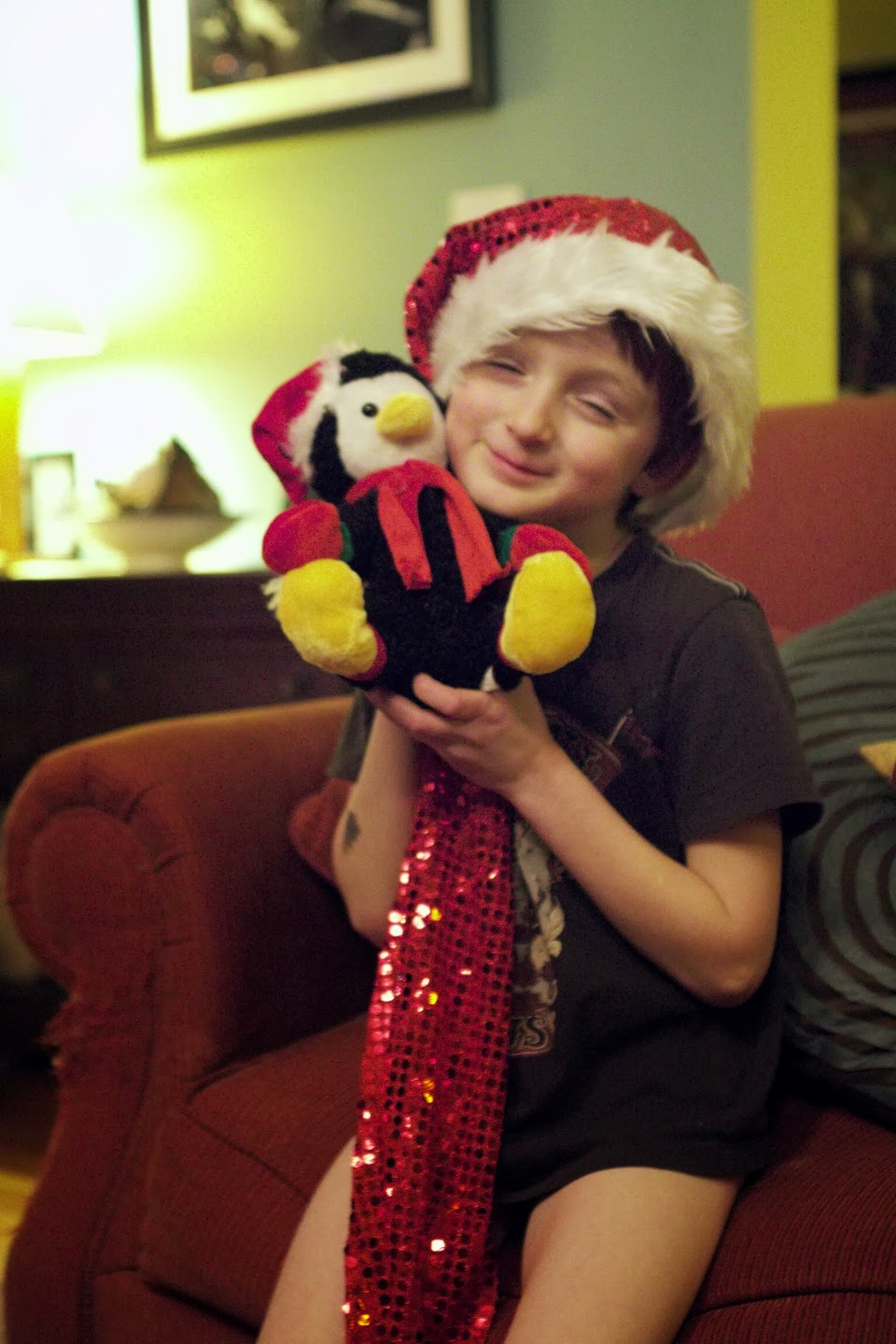 Christmas is the time of year to enjoy the blessings of family, good food and good health.  To that end, we've already enjoyed several noteworthy blessings this holiday season that we'd like to share with you.

First off, Kitty's mom is visiting and was kind enough to prepare not one, but two enormous pots of chili for us!  This was particularly helpful, given that I smashed a glass vase directly into the first pot just as we were preparing to serve it!  We were then immediately blessed with pizza instead of trips to the Emergency Room.

Secondly, Kitty's sister Nicole and her brood are also visiting, with cousins Leni & Josie joining Finn & Edie in destroying the house like only sugared-up little kids can do on Christmas.  And by that, I mean spending the last 12-hours projectile vomiting all over all of the bedding and towels in the house.  Aunt Nicole was so excited that even she joined in the fun!  The makers of 7th Generation laundry detergent will also clearly be blessed this holiday season.

I hope that everyone else is having just as eventful a holiday season.  Who knows what tonight and tomorrow will bring?  Hopefully the Bumpus' dogs will stop by to join in eating our short rib dinner or perhaps our cat will enjoy a nice snack of Christmas lights under the living room chair.

Even if none of those things happen, it's sure to be a Merry Christmas.  Here's hoping that you and yours are having even half as much fun.

Merry Christmas, from the Ninja & the Rookie.  And everything that formerly occupied their stomachs. 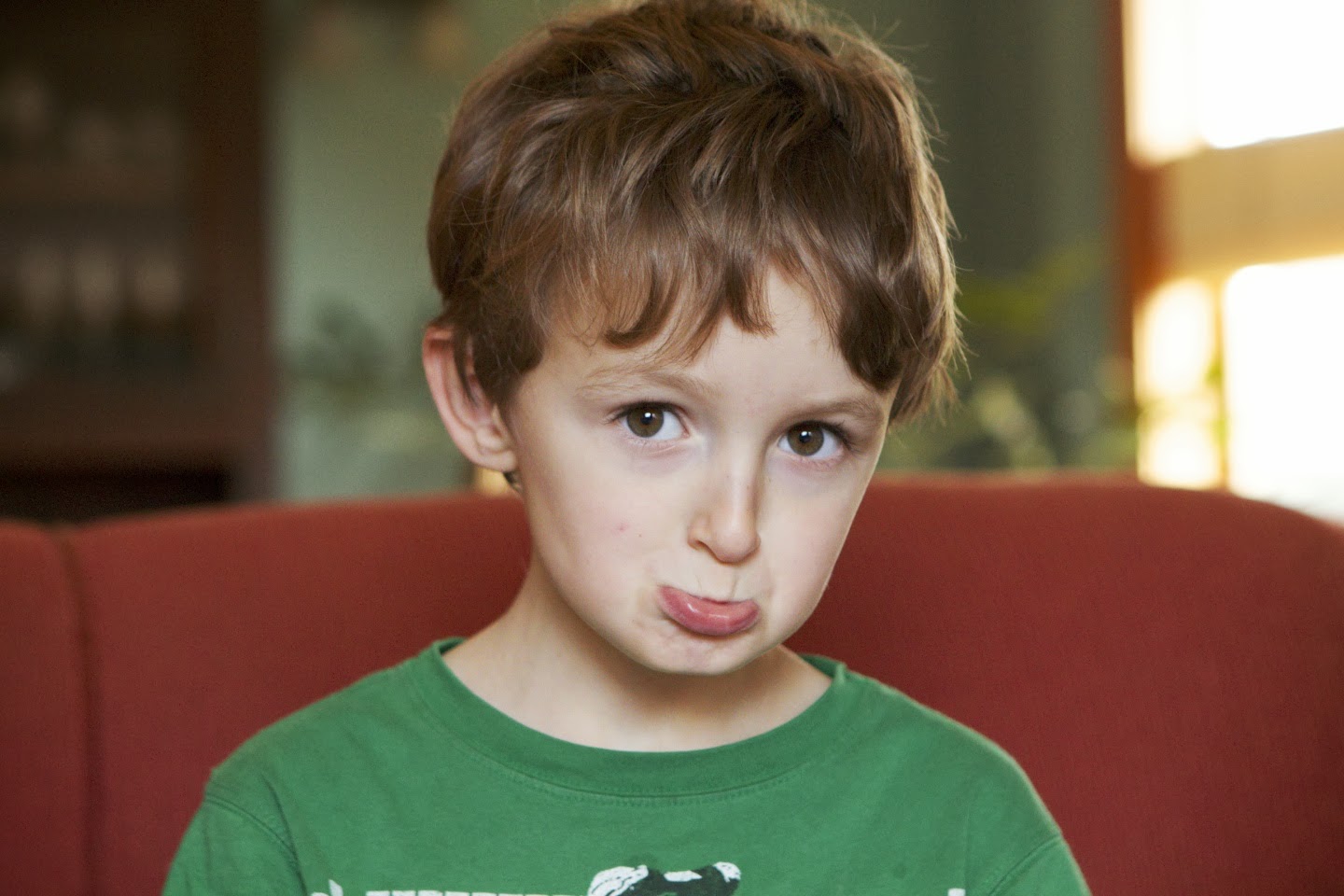 Take me, for example.  The obvious choice would be Woody, but he and I are nothing alike.  He's far smarter than me and has musical chops that I could only dream of.  Kelly, Kelly, Kelly anyone?  The fact that Sam played for the Red Sox and actually has some skill with the ladies immediately rules him out, leaving the only other character that fits: Norm.  Norm actually fits a bit too well to dwell on at the moment, as I begin my fourteenth beer of the day.

Kitty's dark hair and dirty sailor mouth would make her a lock for Carla, however her affinity and devotion to the dramatic arts might actually make her more of a Diane.

Edie would either be Coach, since absolutely nothing she says makes any sense at all, or Paul - secondary character that's round in the middle and has no hair.

In roughly a 24-hr period this past week, I learned the following:


This is just a small sampling, and not even his best work.  My mind is typically so blown after one of these lessons that I forget to write down the details.  My apologies.

Grandpa Finn has a hierarchy for the different levels of BS that one can spout.  It's three levels deep and the third level is reserved for people that are so invested in their own BS, that they're completely convinced that it's true.

Finn has been living in the third level since he was three.  Too bad there's not a spot for that on his report card. 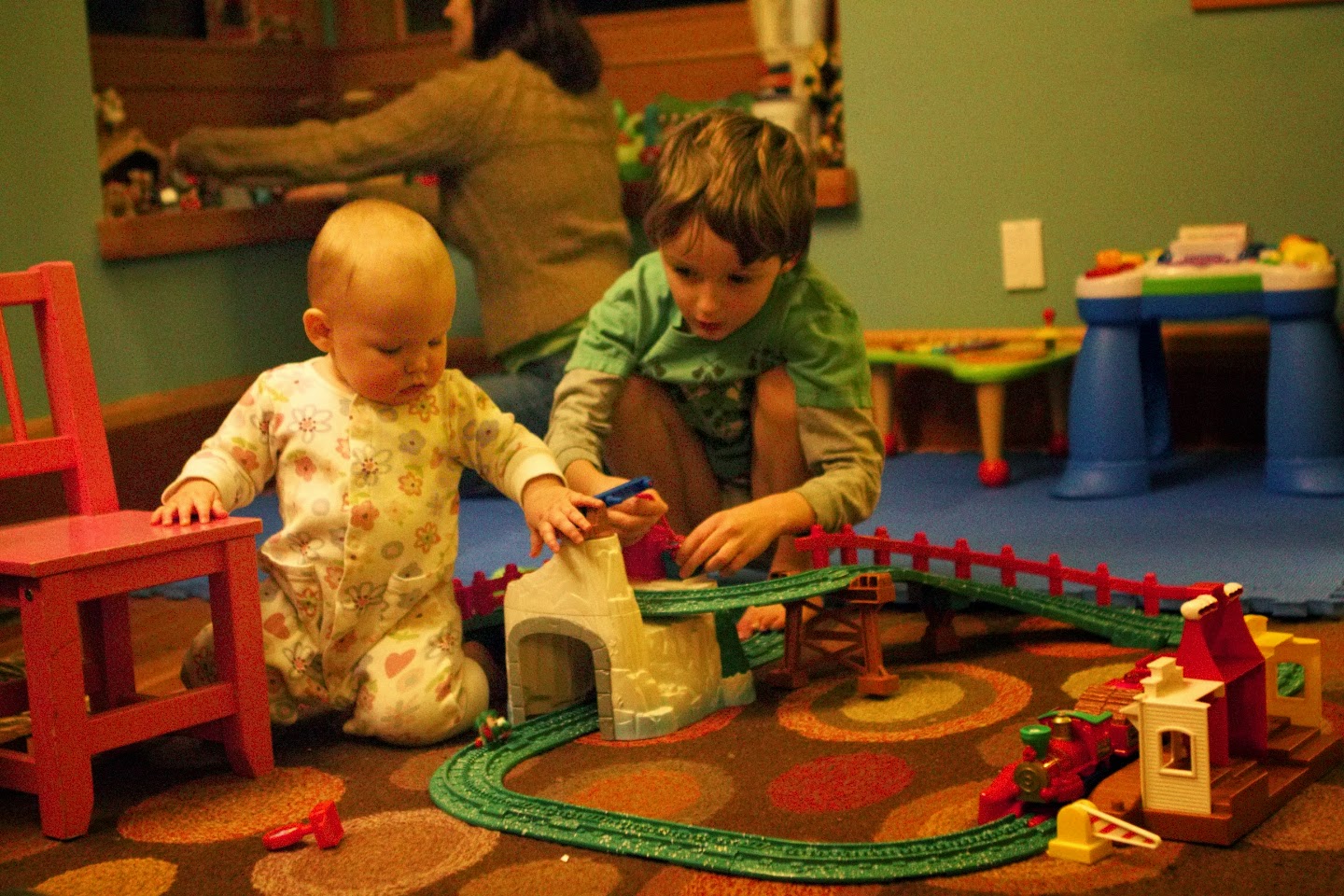 There's really nothing quite like Christmas with little kids.  The anticipation of the Christmas list, the lights & decorations, the bottomless pile of Santa threats to wield.  It's magical.

Tonight we setup the Christmas train in the living room and it was amazing just sitting there, alternately watching Edie try to destroy the entire thing and watching Finn just sit in rapturous joy with the controller in his hands.

Less than two minutes later, those same hands were holding two piles of holiday poop, as he failed to factor in the extra time that getting over the baby gate in the kitchen would add to his toilet commute.  He's not much of a planner when it comes to poop breaks - he'll go running through the kitchen holding his behind at least once a day - and this whole baby gate thing is really throwing a brown wrench into things.

But then an even more amazing thing happened.  I don't know how - it must just be the magic of the season - but even after scrubbing poop out of the kitchen rug, his underpants and the entire lower half of his body & extremities, neither one of us cried or fell into an involuntary lecture-fit about the importance of listening to your body.

It was a Christmas miracle.  We just shared a pretty ridiculous look, a pretty unhinged laugh, and a perfectly lovely bedtime.  While Kitty high-fived herself for drawing the long-straw and putting the baby to bed.

Christmas with little kids is awesome.
Posted by Unknown at 9:00 PM No comments: