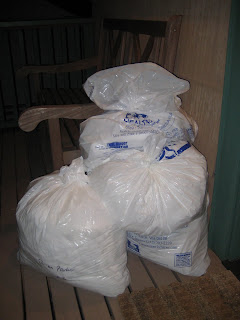 Back when the Ninja was nearing the end of the gestational assembly line, Kitty determined that we were going to minimize our contributions to the local landfill and somehow she convinced me that cloth diapers were a great idea. Something about wanting the house to constantly smell like a Honey Bucket at a Phish concert. I don't know. I wasn't really listening.

Whatever it was, being a good little hippie with poor listening skills, I stupidly agreed and we signed up for a weekly diaper service. We went with the service since I wasn't about to throw dirty diapers into the washing machine with my clothes. Obviously, this is back before I became so intimately acquainted with bodily fluids & excretions. Back when the idea of getting peed or thrown up on terrified me.

In retrospect, my worries probably led us down the wrong path. Instead of being able to quickly launder any stinky diapers, we were stuck with them in our house 24/7 - an ever growing pile of poopy rags. I'd have preferred Finn to just poop directly into the dirty clothes hamper, where we could immediately clean it up, than to have to stick the diapers into a pail that wouldn't get picked up until Friday.

We stuck with it for 16-months, but as of a couple of weeks ago, we are now back on disposables 100%. I thought I'd be thrilled, but now the disposables are nagging at me. Every time one breaks when I try to put it on, or when Finn decides to poop five minutes after I change his diaper, I feel like I'm throwing away my beer money with each wasted diaper. At least with the cloth diapers, I could use as many as I wanted and the price didn't change. In addition to soaking up all sorts of smelly stuff, they were also great for dusting the house and polishing the car. And the big bags they were delivered in made great beanbag seating for guests, as you can see from the pic above.

We need to get this kid potty trained before I stoop to rinsing the disposables out and re-using them. He flushed the toilet for the first time the other day, so he's halfway there. Unfortunately, that's not the important half. Jena's got him napping without a binky, which is more than we've accomplished, so maybe I just need to sit back and do nothing until she gets him potty-trained too.

That approach has served me well in my career, so I don't see why it wouldn't apply here as well.

Get to work, Jena.
Posted by Unknown at 7:58 PM No comments: 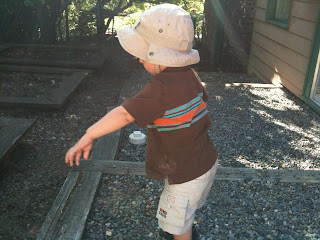 You've heard it all before:

Process repeats itself until boy finds a rock so difficult to move that he can't throw it.

We call that rock "Mommy".
Posted by Unknown at 8:59 PM No comments: 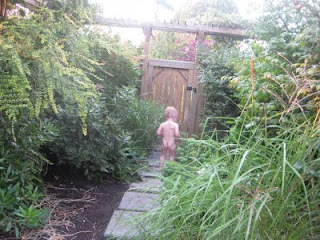 A baseball player who possesses hitting ability (for average & power), fielding ability, speed and throwing ability is said to be a "five-tool player". By my count, Finn's got exactly zero of these tools. He is able to move pretty quickly, but I don't see him stretching a single into a double any time soon. And unless "fielding" ability includes catching balls with your face, he's got some room to go there too.

He is developing his throwing, however. He practices on anything that he can pick up -- rocks, toys, cell phones, tantrums... you name it, he throws it. In fact, the other day I was laying on the living room floor, as I am wont to do, when Finn decided to throw a toy truck at my head. I opened my eyes just in time to deflect it, but it still made enough contact that I likely won't lying on the living room floor again any time soon.

A friend of ours was going through a similar period with her son when he threw a metal truck at her head while she was driving. Concerned about this new development, she asked Jena what she could do. Jena told her that she should start by not giving him metal trucks while she's driving.
That's why Jena has a graduate degree in child development. I never would have been able to figure that out.

Posted by Unknown at 8:53 PM No comments: 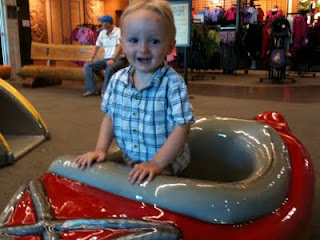 Mommy & Daddy returned alive from their Phish weekend, along with a reminder of the fact that they are no longer in college and/or childless. Mema Finn successfully navigated the boy for his first weekend alone and was rewarded by having to take care of three children once Kitty and I stumbled home through the door, extremely sleep-deprived, on Sunday.

Sleep-deprived. That's what we're calling it.

As expected, Mema handled the weekend with grace and aplomb. We did find out that we missed major milestones in his development over the weekend, like his ability to use the step stool in the kitchen to work the toaster. But one thing we did get to enjoy was his newfound enjoyment of spinning around in a circle until he gets so dizzy that he falls down.

Though to be fair, we saw plenty of that last weekend. Of course, it is exponentially cuter when Finn does it than when an aging Phish fan does it.

Since I don't have any cute pictures or videos of him falling on his head, here's a cute picture of him at REI while Mommy & Daddy shopped for junk they don't need.
Posted by Unknown at 10:09 PM No comments:

This weekend marks the first time that Kitty and I will be leaving Finn for more than just an overnight down the street as we head over to eastern Washington for a 2-day concert event. Mema Finn arrived on Tuesday to make sure the boy does like he's told and stays in the cabinet under the sink while we're gone.

To honor the occasion, Finn decided to glue his eyelids shut with a healthy dose of eye boogers. Nothing like a little conjunctivitis to get the weekend started off right.

Of course, since he checked out with the doc, we're continuing on with our plans to the Gorge. I like to think that we would have changed plans had the prognosis been different, but...

Luckily, we won't have to make that call. Here's Mema and Finny getting ready for a weekend alone. 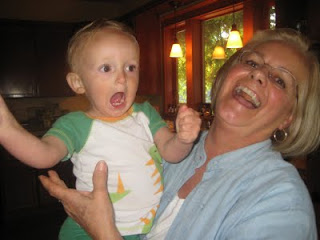 We'll be sure to bring them a phatty hemp necklace from the show.

In other news, since we finally made it to the doc to catch up on his 15-month checkup (a month late, in typical Parker family style), we were happy to find out that his head is still in the 90th percentile.

No wonder it smashes into everything... including my nose.
Posted by Unknown at 7:25 PM No comments: