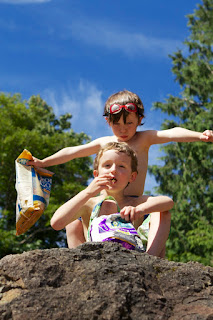 In both of his report cards this year, Finn's teacher took care to point out that one of the things he needs to work on is his soft hands.   OK, I suppose those are two things to work on.  While I was quick to note that soft hands are actually desirable for a major league shortstop, I was smartly ignored and we went about discussing things hobbies that he could pick up that could strengthen his hands.  And so it was that we entered the Lego Era.

What began as a fun activity that both Finn and I could share, with me yelling at him to follow the instructions and him smartly ignoring me (trend) and building whatever he wanted, turned into an explosion of creativity and innovation for Finn.  He very quickly learned his way around a Lego set and I became a creative liability in our partnership.  I chose to fill my role by purchasing ridiculously overpriced Lego-branded organizers to keep the Lego kingdom that's growing in our corner in check and promising to negotiate with Santa for more also-ridiculously-overpriced Star Wars themed Lego kits for Christmas.

As an aside, it's pointless to argue Lego economics with a five-year-old.  Cost means nothing to Santa, according to Finn.  I point out that while Santa can likely build the Death Star kit in his workshop, he still needs to acquire Lego materials from somewhere and even with the government subsidies that he surely enjoys, that's expensive.  I've been informed that I'm incorrect in this matter and that Santa has a line on all of the Lego materials that he needs at no cost.  Santa has a guy.  I need a guy.

After watching Finn immerse himself completely in all of these tiny little construction projects, it seemed like it was probably time for us to take the next step in our builder journey and build a fort.  A real fort.  Not the kind with couch pillows and blankets.  Yeah, let's build a fort.  We've got the space in the backyard.  I've got tools.  Let's do it.

In should be noted that this realization had absolutely nothing to do with the Father's Day article that I had just read about all of the awesome dads that apparently build their children their own working space shuttles every day of the week.  No, that article didn't make me feel like a total loser that's disappointing his child with his every non-space-shuttle-building breath.

Either way, now that I've made the mistake of actually verbalizing this thought in front of Finn, it looks like we're building a fort.  Because after all, the only way to be lamer than the dad that never builds anything for his kids is being the dad that promises to build something for his kids and then drinks beer in front of the TV until he falls asleep instead.  And I already do that enough.

Unfortunately, I'm completely out of my league when it comes to major construction projects.  So it's  a good thing that we're headed back east in a couple of days so I can consult with the handier members of my family.  I bought two idiot-proof books of fort & treehouse plans online and with Grandpa and Uncle Scott's help, we just might be able to pull this off.  By 2015.

Of course, if this turns out to be completely out of reach, maybe I can use all of the materials that I'll have purchased to build a box to keep the new Roll-over Edie model in.   And with that "parenting" distraction out of the way,  I can get back to what's important.  Drinking beer until I fall asleep in front of the TV.
Posted by Unknown at 10:31 PM No comments: 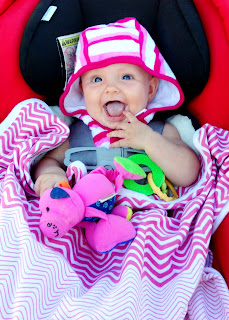 The unexpected passing of Tony Soprano wasn't the only thing giving everyone a case of the sads yesterday - the world at large also wept because everyone knew that it was Kitty's first day back at work.   After scrupulously reviewing our family budget 357,421 times over the past month to determine whether we could keep ourselves in organic toothpaste and hand-sewn Norwegian cloth diapers on one income, we finally came to the realization that it just wasn't possible.

Lord knows that a life without artisinal truffle kale chips is not a life worth living.

And so it was that Kitty rejoined the workforce, but not before liberating Edie from the clutches of the baby factory daycare that we had enrolled her in and into the arms of our new nanny, Katherine.  It's obviously not as good as watching Edie herself, but we like our significantly reduced chances of catching the millions of baby diseases that teem through the depressing concrete-block infant daycare so much that it made the additional cost worth it.  Plus, having Katherine come over to take care of Edie every day has the added benefit of directing Kitty's frustration & anxiety away from me and back toward the person that now gets the pleasure of staying home with her daughter.  Which is nice.

Of course, we had to absorb the increased childcare costs somewhere and it wasn't going to be my beer budget, so we went with the most extraneous item we could think of - e.g., Finn's clothing.  What's that you say?  You saw Finn leaving the house this morning in pants that were two inches too short and a pair of dirty Crocs with white socks on underneath and therefore don't think that this is the time to start limiting his clothing options?

Whatever.  He doesn't care.  His lunchbox is filled with delicious kale chips.  And that's really all that matters.
Posted by Unknown at 3:40 PM No comments: 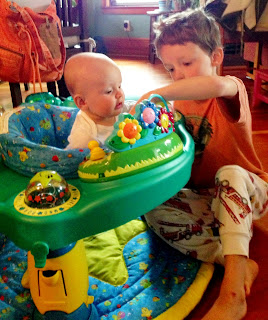 On the occasion of Me Day, allow me to expound upon the many reasons for which I love being your dad.

Finn, I've known you the longest, so let's start with you:
Edie, we haven't known each other quite as long, but it's certainly been an action-packed four months:
To both of you, if you're ever reading this (god forbid), know that these past five+ years have been the greatest of my life, and I say that from the bottom of my sleep-deprived heart.

Happy Father's Day to everyone out there in Ninjaland, including Grandpas Parker & Finn, and all of the uncles that are hopefully right now drinking bloody marys and watching baseball.

As I plan to be as soon as I finish this sentence. 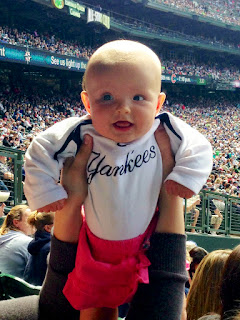 It was a banner weekend for the baseball lovers in the Parker Family.  The Yankees were in town, so Kitty and I took Edie & Finn to Edie's first game on Saturday.  Even though her future husband Derek Jeter wasn't going to be playing, I wanted to make sure that she got a chance to see Mariano Rivera pitch in his farewell season so that she and Derek would have something to talk about while they sailed the Caribbean in their future Space Yacht.

Plus, it's character building for my children to attend Mariners games as Yankees fans so that they can be booed.  In theory.  It doesn't really work out that way, however, since of the 40K people at each game this weekend, only about 7 of them were Mariners fans.  You really couldn't hear the boos over all of the "Let's Go Yankees" cheers, but gosh darnit, you knew they were there.  They try so hard.

One Rivera appearance not being enough, Finn and I went back to the park again on Sunday with Archer & Cyrus.  Seeing as I was decked out in my future-son-in-law's #2 jersey, a Seattle fan was kind enough to come up to me, put his arm around me and gently say, "The Yankees Suck."  But then immediately regretting this rude outburst, he quickly followed it with an "I'm sorry."

I've given Finn the green light to choose his own sports allegiances, but whatever he chooses, I'll need to teach him to talk better smack than that.  Of course, first we'll need to try a little harder to actually choose a single allegiance before he can give anyone grief.  Note his uniform selections below. 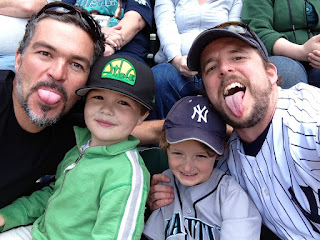 At least by picking both sides, he's sure to win.  Just like the Yankees in Seattle.

As Edie plans to say when shaking hands with Rivera at her wedding, "Thanks for the Rings, Mo!"
Posted by Unknown at 9:36 PM No comments: 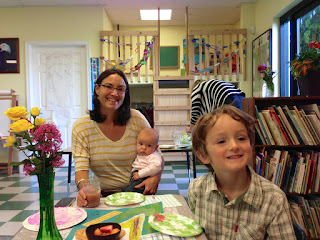 It's easy to make fun of Montessori schools.  In fact, the Onion did a really good job of it here.  I'm always on the lookout for a joke and I sure don't want to have to work hard for it, so Finn's Montessori enrollment has been a boon for me.


It should be noted, however, that not working hard is hard for a Montessori parent, what with all of the requests to "participate" in my son's education and "contribute" to the Montessori community.  Hippies.  You want me to come in and "read to the kids"?  How about you start stocking booze and we'll see what happens.

But I digress.  The Montessori method is all about self-guided learning and cultivating creativity through a relatively unstructured environment.  Now that we're wrapping up Finn's first year there, I can safely say that they have cultivated the crap out of Finn's natural ability to come home and beg to play Angry Birds.

To celebrate such accomplishments, they wrap up the year with a big "Parent Tea", where all of the parents come in to the classroom to be served refreshments by the kids.  Aside from the fact that there was exactly zero tea anywhere on the premises (don't hold me down with your truth-in-advertising rules, man!), the event was undeniably awesome.  Finn seated us, eagerly showed us the place settings that he had made, including a bowl made entirely of chocolate (!!!), and then sat down and stared blankly at us while we wondered whether we were actually going to be served anything other than a smile.  A quick "Dude, who's supposed to bring us those cookies over there?" later and we were enjoying a very classy snack with our little gentleman.


Of course, here's our little gentleman just 24 hours later, army crawling through an enormous mud puddle.  Full clothed.  In the same shirt he was wearing for the Tea.

I believe at Montessori, they call this "Aquatic Studies". 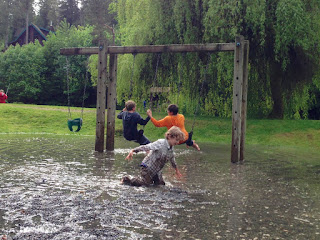