Captain Underpants Does the Puyallup 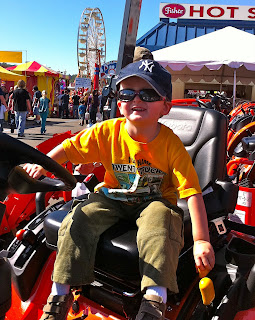 We're now two weeks into Operation Underpants and it's clear that we're not out of the woods yet. Casualties have been minimal, but consistent. We have yet to experience an accident-free day, though today was very close with only 1/2 an accident.

We have determined that we can minimize homeside issues by forcing Captain Underpants to go commando. While he doesn't seem to care too much about peeing in his pants, he isn't thrilled about the prospect of peeing on his toys so he's more likely to head to the potty when prompted.
Commando works at home, but not so much at daycare or on excursions into the outside world. Daycare... whatever. Not my problem. Excursions? Definitely my problem.

Particularly when said excursion is our first trip to the Puyallup Fair! Allow me to preface this story by stating that many of my fondest summertime memories growing up were at the Dutchess County Fair in Rhinebeck, NY - which is also where my brother and Chelsea Clinton got married this summer.

Not to each other, thankfully. Nothing against Chelsea - I'm sure she is a very nice woman - however I would not look forward to explaining to my father-in-law that we would be spending the holidays with the Clintons.

The Puyallup Fair is bigger than the Dutchess County Fair by a magnitude of infinity (there's a sky tram and a Tesla/Queensryche double-bill!), and while I love me some summer fair, we've never before made the trip in the 15 years that we've lived here. But Finn needed a corn dog, fourteen separate hot tub dealers and a midsized tractor/backhoe (pictured above), and there's only one place you can find that.

Puyallup is about forty-five minutes south, but it might as well be Mars. Mullets, jean shorts & Harleys abound, as they do in certain areas of Seattle, however here it's not intended to be ironic. Weird.

Suffice it to say, we had an amazing time. Probably the best morning (that did not involve a Bloody Mary) that I can remember in ages. Finn was overload-stunned into catatonia for 85% of our time there, but we did catch a couple of rides and eat some fair food. And the only accident of the day was on the car ride down - from there on out, he used the surprisingly clean fair restrooms dependably.

Behold: Mutton Bustin'. I've watched this video at least 18,465 times since yesterday and it has yet to get old.

Finn better be ready for his six seconds next year. We need to get him bulked up on corn dogs, stat.
Posted by Unknown at 8:29 PM 2 comments:

Since it's been a while since we've posted a talkie of Finn up here, I figured I'd share this demonstration of the proper method of wetting one's pants.
It's a shame I only caught the last jump, before Finn decided to try and ditch me altogether. The first 34 splashes were much bigger. Trust. 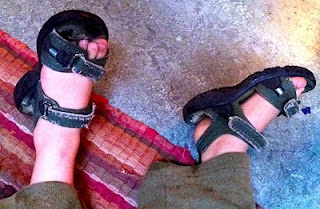 I don't know what kind of creative potty training is going on over there at daycare, but every day I've picked Finn up this week his shoes have been on the wrong feet.

Whatever it is, it seems to be working as Finn has only had a couple of minor accidents at home. I'll call them minor, as I will be overlooking the Curious Case of the Ankle Poop as it lacks any logical explanation.

Unfortunately, the story from daycare is not quite as bright. Until today, he was averaging about an accident a day - not bad - but today brought three. With a little digging, it was determined that this is likely the result of the jelly bean rewards being offered. Apparently, Finn hasn't quite gotten the fact that you're supposed to go in the potty to get the reward and was furiously trying to pee his pants as often as possible for a treat.

I shouldn't be too surprised, since our attempt at bribery over the weekend went sideways too. We bought Finn a cookie for being so good and we were trying to get him excited to use the potty so he could have the cookie by baiting him.

After finally getting the correct answer...
Us: "What does Cookie Monster love to eat?"
Him: "Crackers!"

We gave him the cookie before he further embarrassed himself.
Posted by Unknown at 9:32 PM No comments: 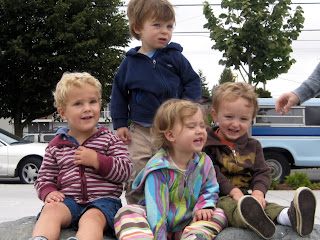 I wouldn't recommend sitting on this rock
Final tally for the weekend:
Potty: 18
Underpants/floor/road: 4
Not bad. Particularly, when you consider that those four were all of the #1 variety. Of course, I'll bet none of you - me included - expected so much scoring. Anyone who took the "over" on the weekend definitely raked it in.
While the score is definitely very much in Finn's favor, I'm not sure whether that speaks more to his predilection for the potty or for our OCD placement of him upon it. In looking back at our toilet log - OK, that didn't come out right - it appears that we took Finn to the john roughly every 45 minutes on Saturday, each time initiated by us. With that kind of frequency, it's not surprising that he didn't have any accidents.
On Sunday, we chilled out a bit and the average stretched out to an hour and a half or so - and predictably that led to a couple more accidents. And I do mean accidents, insofar as I don't think Finn has any idea how his pants are getting wet. He'll need to figure that out, if we're ever going to be able to successfully toilet-bribe him with candy.
Whatever. It's Monday now. It's Jena's problem.
Hey Jena - Have this worked out by Friday, okay? Our washing machine is begging.
Posted by Unknown at 8:06 PM No comments:

Day 1: There Will be Poop

Let's hope we're all still smiling at this point tomorrow. 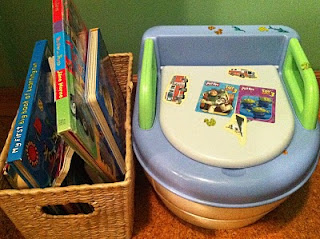 Whatever you do, don't open the lid.
Upon this throne sits a future President of the United States. In fact, I'm pretty sure this is exactly what George Washington's potty looked like. Except maybe for the Toy Story 3 stickers. They were probably still on Toy Story 2 back then.
Aside from its obvious flair, the best part of the potty is its portability. Whether it's precariously tucked under my arm as I furiously run it downstairs to the kitchen because Finn has decided that he's ready to go, or it's crammed in the back of the car for an aromatic trip to the cabin, this potty is made to move.
Not that it'll be moving that much starting this Friday, as we make the official transition to underwear. We're prepared to hunker down in the house all weekend so as not to get too far from the potty and/or the hot water, soap and washing machine. To prepare, I was instructed to go to Target and buy as many little boy's underpants as was legally allowed without having to register my name with the state. Apparently, this process gets messy.
Finn couldn't be happier about the possibility of putting on underpants - assured to be the exact opposite of his position on the matter in roughly 16 years. We've been letting him play with them for the last couple of weeks, which is actually way cuter than it sounds. Because it sounds kind of gross.
Even though they've never been worn. And even though they've got little Buzz Lightyears and little Maters on them. Which makes them totally adorable.
OK, I'll admit it. I put them on my head like a hat to make Finn laugh.
Now if you'll excuse me, I need to go register with the state.
Posted by Unknown at 9:06 PM 1 comment: