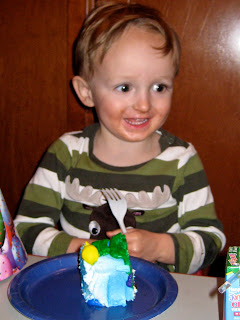 On the occasion of Finn's second birthday, I'd like to give my son a big birthday shout-out and let all of his (Facebook) friends and (Twitter) followers out there know that no matter what I may write here, these past two years have been hands down the most exciting (and exhausting) of my life*.

The past 12-months have found Finn talking, running, jumping, talking, using the potty, talking, dressing himself and talking. That's at least 3 more skills than I have and I couldn't be more proud.

Though I wasn't quite as successful in the past year of getting videos of Finn doped up on dental drugs as David's dad, I was able to catch this photo of him whacked out on birthday cake. 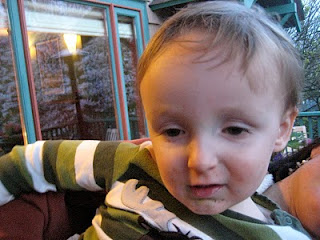 What a handsome man.

Dear Finn,
Should your future-self become an internet archaeologist and should you ever happen across this blog in one of your e-digs, know that your second year as a Yankee fan was a resounding success. Certainly much more productive than your first. However, keeping with policy, we won't be discussing the state of your contract until after this season.
No pressure or anything.
Love,
Daddy
------
*Of course when I think back on my life, there's a period of about 10 years that I don't recall at all on account of youthful exuberance - i.e., Phish shows - but I've seen the pictures** and given the evidence, I'm pretty sure that I spent the majority of those years hung over.

**No, you may not see the pictures.
Posted by Unknown at 2:43 PM No comments: 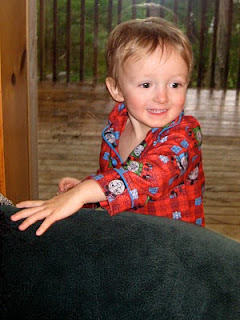 I thought you'd all be eager to hear that.

Of course, we put him on there at 7 AM this morning and didn't let him off until 7 PM tonight on account of the fact that he still won't let us know when he's gotta go. Baby steps.

As you can tell, I'm really hard up for material. With his birthday this weekend and both Mema and Grandpa Finn in town, hopefully something blogworthy will happen.

It had better, because I don't know how long I can keep Poopwatch 2010 interesting.

Wait.... yup, that was it. No longer interesting.

Email ThisBlogThis!Share to TwitterShare to FacebookShare to Pinterest
Labels: firsts

An Olympian is Born 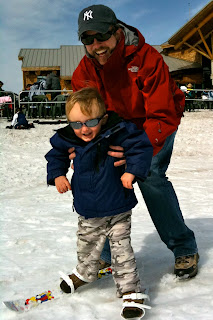 As you can see from the picture above, this weekend marked Finn's first time on skis. Kind of.
I think it's time for a PEPS meeting. I'll bet we don't have any other 1.98 year-old skiiers out there.
I'm sure Bode Miller's skiing career began similarly, so in keeping with his day on the slopes, we followed it up in true Bode fashion with some hot tubbing and boozing (not pictured).
Next stop, Sochi!
Posted by Unknown at 8:24 PM No comments: 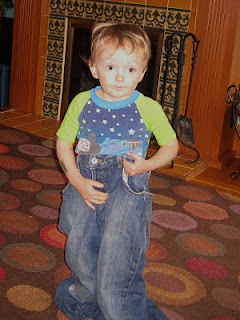 When I used to picture myself as a Father, it was always as the stern authority figure, smoking a pipe in my easy chair, aloofly reading the paper and only looking up to cast a withering glare at my misbehaving son, who would immediately snap into shape out of his immeasurable respect for his head of household. I would rule with an iron fist, as my sole intent is to raise a Man. One that exhibits impeccable manners and above all, respects his elders.

How have I done so far? Let's see...
Turns out that I am more addicted to the power of Cute than I am to my preconceived Fatherly Ideal. The minute that Cute is replaced by Toddler, I will drop everything to set things right again. If there is anything standing between my son and Manhood, it is clearly me.

And so it is with much shaking-of-head that Kitty is trying to whip me into shape. I'm doing better with the picking-up/carrying thing and I've learned how to sneak in a couple of swipes of tooth-brushing around the tooth/tongue/tears defense, but I'm now up against a fearsome opponent. One that threatens to take down not just me, but also the immovable object of the Mommy.

Do you recall hating getting dressed? I don't. I recall not being very good at it - in fact, I'm still not very good at it - but I don't recall hating it. Well, this kid hates it. So much so that he preferred to stay in his room by himself for well over an hour on Saturday morning - prime rock throwing time - rather than get himself dressed.

And I should clarify, it's not that he hates being dressed. He just hates having to do it himself. He'll happily hop over to me if he thinks I'm going to put his shirt or pants on, but ask him to try to put his legs in those same pants himself and it's as if you've forced him into the most degrading act imaginable. If he could only figure out how to use the phone to call anyone other than Layla, he'd have Child Services over here in a heartbeat.

Oddly enough, he enjoys putting on my clothes, as evidenced from the picture above.

So this has become our first great battle of the verbal era, and one that I am determined to use to reset my fate as the authoritarian Father of my pre-child imagination. I can only hope that this battle of wills goes better than previous wars waged against our cats.

In other words, I hope that Finn doesn't poop in my shoes.
Posted by Unknown at 8:29 PM 3 comments:

Email ThisBlogThis!Share to TwitterShare to FacebookShare to Pinterest
Labels: tantrum

Kitty and I decided to let Finn have a date night with Layla. We're at the Sounders game for B's birthday and just got this picture from Jena's.

That looks way better than soccer. 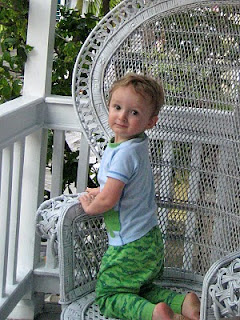 The fact that Finn spends every waking second of every day talking is no surprise if you've met his mother. His compulsion to narrate his every move - or sometimes to narrate the fact that he is not moving at all - has earned him the nickname Rain Man at home.
Turns out they're calling him that at daycare too. Check this video, which finds our little savant playing basketball by himself, announcing the color and size of each ball as he places it in the basket. This is pretty typical and is also applied generously to each type of vehicle on the road, each type of object in the sky and each sound in the neighborhood. This kid can hear - and announce - a firetruck in Tacoma from West Seattle.
He has also developed the insufferable tendency of referring to himself in the third person, but of course he offsets that with gallons of cute daily, like when he screws up his pronouns and asks us to "help you" when he means "help me." Or when he eats week-old raisins off the floor. Adorable.
All of his new words have enabled him to take his manipulation up a level. Whereas it used to be all about the targeted, strategic crying fits, he's now pulling out the big guns. We weren't ready for it the first time - so it actually worked - but we're wise now.
Pay attention: the next time that you're babysitting Finn (and you should be offering to babysit Finn, slacker) and he starts crying because you've asked him to brush his teeth/put on his pajamas/stop hitting you with the toy car, don't fall for it when he turns to you with his face all scrunched up sad, puts on those puppy dog eyes and asks:
"Hug?"
Trust me, you're getting played. Stick to your guns and know that he'll get over whatever is bothering him in two minutes when he gets distracted.
If you need to hustle it along, just look for some old raisins on the floor.

-----------
Footnote on Key West: I forgot to mention that we ended our trip like real Broward County locals, by giving Finn a ride in a South Florida car seat - i.e., my lap in the back of the cab of the pickup truck that was our "shuttle" from the RV rental joint to the airport.
All I can say is that I'm glad we got off the road before this lady got on. I don't think I'm ready to have to explain that to Finn just yet.
Posted by Unknown at 9:22 PM No comments:

Email ThisBlogThis!Share to TwitterShare to FacebookShare to Pinterest
Labels: manipulation 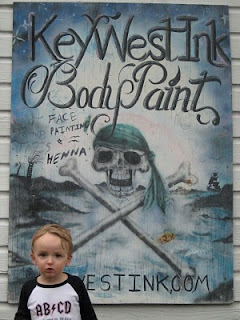 Finn's been bugging us for a new tattoo and/or body paint for a while, and since all we have in West Seattle are nail salons, we figured we'd make the short trip to Key West so he could sneak in a visit to his Grandparents as well. I mean, it's only like 3,000 miles.
In hindsight, maybe two flights - totaling 8 hours - followed immediately by a 4 hour car trip for a grand total of roughly 12 hours of travel each way (plus layovers) for 3 full days in Key West was a little much.
Of course, if you've been to Key West, then you know why we didn't pay too much attention to the math.

Seattle has exactly two things in common with Key West: dog bars and gay bars. They may both have gay dog bars too, but we didn't get that far. We were too busy enjoying the things that Seattle doesn't have, like sunshine, the sunset street performers in Mallory Square, the amazing Old Town architecture, the banyan trees and the lack of an open container law.
We enjoyed that last one a little too much, which is one reason why - just maybe - three days was exactly the right amount of time.
As I'm still recovering from both Duval Street and a cold I appear to have picked up on our little family version of Amazing Race, I'm going to leave you with a quick list of the things that Finn enjoyed about Key West:
Given that he had easy access to all of the above, and despite the fact that he spent nearly 1/4 of the full 5 days traveling, he was in top form for the entire trip. We didn't have any issues at all until the final leg of the journey, when he woke up suddenly on the plane and started screaming so loudly and so inconsolably that we were certain he was going to throw up all over us.
It was a rough five minutes, but we made it through without any vomit. And in the end, at least this didn't happen.
Here's Finn & Grandma enjoying some good ol' fashioned rock throwing outside Schooner Wharf, one of the aforementioned dog/dockside bars. 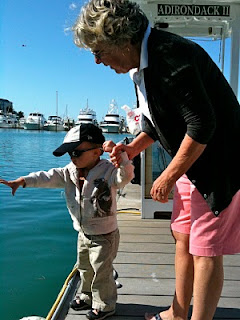 It was Grandma's turn to stop drinking for 5 minutes, which is important, because the Key West docks are not big on "child safety."
Posted by Unknown at 8:10 PM No comments: