What came first, the booger or the scab? 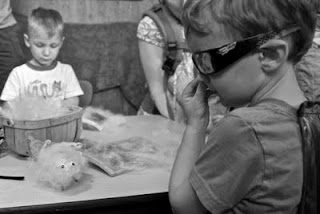 Finn has developed a new favorite hobby.  The good:  it's free and he really seems to enjoy it.  The bad:  he hasn't yet learned that you're only supposed to enjoy it in the privacy of your own totally exposed car in rush hour traffic, like your Daddy.

No, it's not head-banging to vintage Winger. It's picking his nose.

And he REALLY likes it.  I estimate that Kitty and I now spend roughly 1/3 of our lives smacking his hand away from his face, since the Positive Discipline books don't have a chapter on resolving this through love and/or logic.

The issue isn't so much that he's picking his nose, but that he's doing it really poorly.  He'll be blatantly mining for gold at the restaurant dinner table, he'll be picking a winner right before grabbing a toy at the playground, he'll be исследовать просторы носа/ноздрей - which apparently is a Russian euphemism for digging boogers out of your face - right before grabbing a grabbing a piece of food out of a shared bowl/bag.

And it's not just that he's doing it in so obvious a fashion, but that he's also apparently injuring himself in the act.  We've noticed that he's now got a scab in his go-to right nostril.  I believe that the scab is a result of his energetic snot mining.  Kitty maintains that it's the itchiness of the scab that is causing him to appear to be picking his nose.

I fear that this disagreement may continue well into Finn's adulthood.

Perhaps while we await the ultimate resolution of that discussion, I can teach him the ol' stealth pretend-to-be-scratching-your-nose move to at least cut down on the public embarrassment.

Plus, if he's taking a more modest approach, he'll be far less likely to seriously injure himself while head-banging to vintage Winger in the car. It certainly works for me.
Posted by Unknown at 8:49 PM No comments: 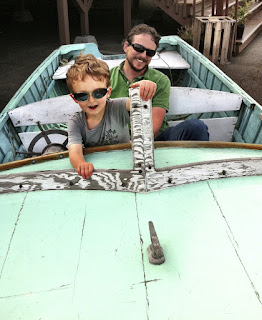 You are our rock and our roll. What would we do without you? Someone has to be the one to give the kid a chocolate cupcake at at 7:45 PM at night (last night). I warned of poor (craaazy) judgement, but the post cupcake walk/run/jump/dance around the neighborhood was more than entertaining (and worth it). Plus we now have a strategy for today, when the Ninja skips his first nap EVER in favor of the Mariners game at 1:00 PM. We know baseball is a close second behind your family and threatening all the time, especially during the playoffs. So bring on the cupcakes and let's hit the ballpark. Besides, if he crashes, it's only the Mariners after all.
Happy Father's Day Woody. We LOVE you and Finn says you are the best Dad he has ever had.
Happy Father's day to Grandpa Finn and Grandpa Parker too!!
Posted by Mommy at 7:28 AM 1 comment:

Cupcake hangovers are the WORST 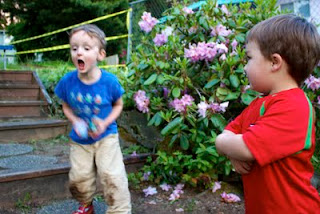 Kitty was out of town this past weekend, cashing in some of the chips she earned while I was on the Cabo bachelor party a couple of weeks back.  While she was gone, Finn and I set new personal pizza bests, eating it for every meal for three straight days.  We broke that streak only so we could attend a barbecue, where we both finally had a healthy meal... of cupcakes.

As always, the picture says it all.  This is what happens after three straight days of pizza, topped with four cupcakes.

Cyrus does not appear to be impressed.
Posted by Unknown at 10:14 PM No comments:

Kicking your hands all over the place 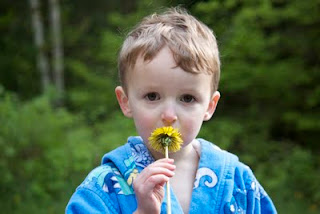 Freddy Mercury stopped by our house at the crack of 8:30 am Saturday morning.  Clearly, he didn't appreciate the fact that I was still in bed, so he decided to break out a window-rattling version of "We Will Rock You."  I stumbled bleary-eyed downstairs to give Mr. Mercury a good talking-to and was confronted by the sight of Finn and Kitty rocking out to Queen in the living room.

Apparently, Kitty had asked Finn if he wanted to sing a song, expecting a request for the house favorite Garbage Truck and/or Fire Truck Song.  Finn broke character, however, and specifically requested "We Will Rock You."  After confirming that he really did mean the Queen song, she obliged by cranking it up to 11.

I'm just happy that he knows some rock and roll lyrics.  For a couple of people that spent their entire future retirement savings and son's potential college education on concert tickets and "incidentals", we've done a terrible job of introducing him to music.

In fact, up until this point, I'm pretty sure the only song he knew the lyrics to was "Party in the USA" by Miley Cyrus.  While it is cute to hear him singing about throwing his hands up and moving his hips, I'd much prefer him to not be the guy in the Hannah Montana t-shirt getting beat up on his first day of kindergarten.

Of course, if the bullies do come at him, he can always kick their hands all over the place.
Posted by Unknown at 7:45 PM No comments:

Sunshine has finally arrived in Seattle... for the moment... and with it comes Finn's favorite summer sport.  It's kind of a combination of horseshoes, baseball and straight up chillin' in a bathrobe that's 2 sizes too small.

We call it Ninjaball.  You should try it.  It's awesome. 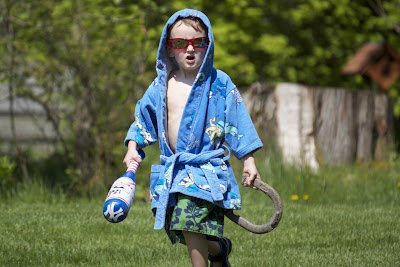 Posted by Unknown at 5:17 PM No comments: