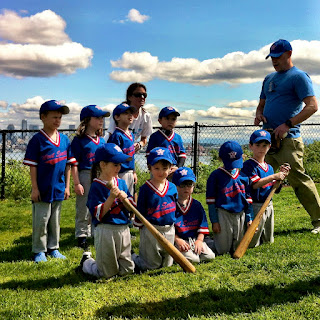 At least that roster fee wasn't a total waste.

Ah well.  His 2012 playing career appears to have been just one game shy of Archibald "Moonlight" Graham's.  Maybe James Earl Jones will play Finn in the movie too.

Next year.
Posted by Unknown at 8:42 PM No comments: 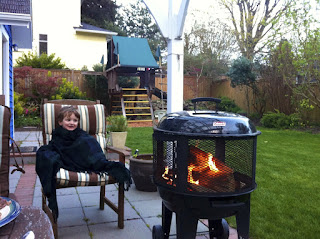 Here's a little math for you:

I'll tell you what it equals:  some terrible parenting and a whole bunch of episodes of Mighty Machines.  The most common question heard in our house last week?  "Can I watch another one?"  The most common answer?  "Yes.  Yes, you can."

I love those sassy Canadian trucks.

On the plus side, the weather has been awesome for the last week or so.  Gorgeous and sunny and very un-Seattle-like.  Unfortunately, that has not convinced Finn to pick the tee-ball bat back up, so we've now officially thrown in the towel.  And right before the team picture, dagnabit.  I haven't returned the uniform yet, so maybe I'll try to still sneak him into the picture as we're handing it back in...

In any event, if they started playing tee-ball on top of a new mattress, I could guarantee that Finn would be all over it.  Mattress-hopping is the first sport that I've seen him genuinely enjoy.

This one is for the grandparents.

Now if you'll excuse me, I've got a tee-ball photobomb to plan.

The End is Near 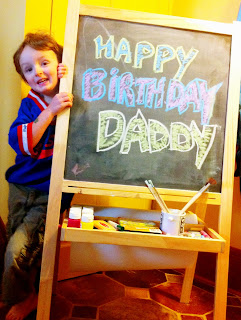 Happy Birthday to the best husband and father I know. Enjoy your last year!! 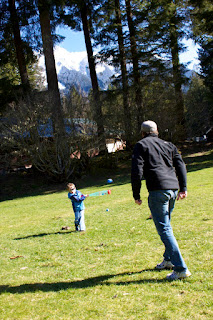 Ya know, I don't think this tee-ball thing is going to work out.  And it's not for lack of trying - on my part.  I had no idea tee-ball required weekly practices in addition to Friday night games, but I'm totally willing to forgo my extensive personal life (read: watching baseball on TV) to take him to the field.  Unfortunately, he does not seem at all interested in playing - which includes a lack of interest in learning the proper direction around the bases, the correct hand to place his mitt on and/or the accepted way to return a ball that's been thrown to you (hint:  it's not by repeatedly kicking it randomly all over the field).

We've had three or four practices so far and it's just not catching on.  It turns out that nothing is more painful than sitting on the sidelines at a four-year-old's tee-ball practice for an hour watching him randomly kick the infield dirt and apparently explicitly ignore his coaches and teammates while you silently urge him just to look toward the general vicinity of the batter so he doesn't take a line drive to the back of the head.  Unless it's sitting on the sidelines for an hour silently urging in the pouring rain.  Which it invariably is, given that this is Seattle.

In other words, I think I'm OK with maybe calling it a season.

For a while I thought I could just appeal to his competitiveness and eagerness to "win" everything.  (This is apparently a family trait, as I may or may not have told Kitty that I was going to "break (her) face" during a particularly heated "Sorry" game last weekend.)  But in the end, that doesn't appear to be enough.  We were supposed to have practice today, and since it was sunny, I was actually looking forward to it.  When I asked him if he wanted to play, he told me he didn't want to play ever again.

The last thing I want to do is push him so hard that he turns off from baseball forever.  That would be unfortunate.  Perhaps it would be best to take a break and practice some fundamentals; perhaps learn how to catch and throw a baseball.  Then next year, maybe find a team with a friend of his playing on it and try this whole thing again, but only if he wants to.

Of course, the hard part is going to be convincing Finn to give back the uniform.  After he informed me today that he didn't want to play anymore and I told him that meant that he'd have to return the uniform, he thought about it for a second before informing me that he just didn't want to play this week and that he wanted to start again next week.

So maybe we'll wait another week before we throw in the towel.  Who knows, maybe this time next week he'll be standing at the plate taking some big cuts.

Of course, it'll be the wrong side of the plate.  We haven't worked that part out yet.
Posted by Unknown at 9:07 PM 1 comment: