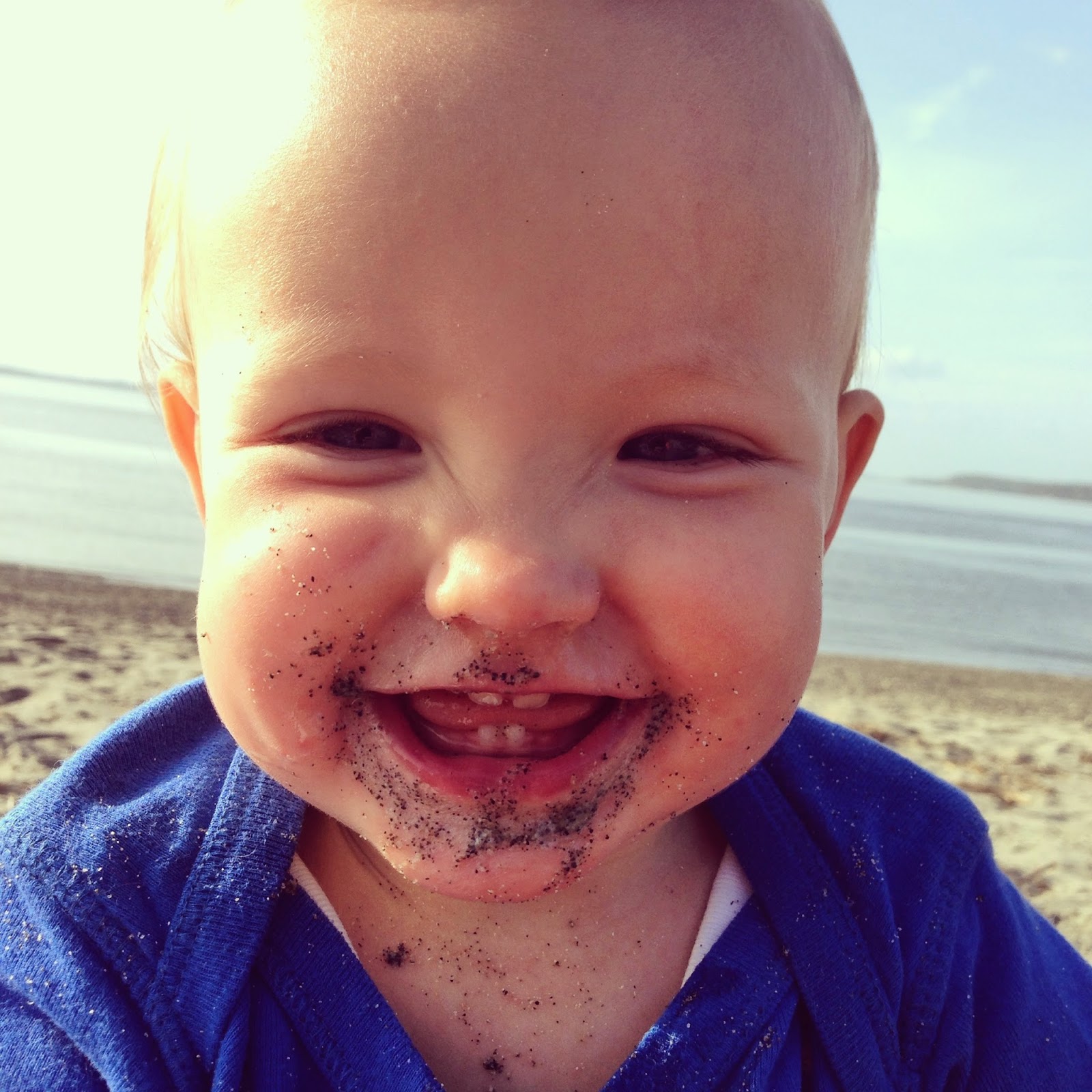 I don't know if y'all have picked up on this, but there's been a distinct lack of Edie posts round these parts lately.  It's true - she's been blackballed from the blog.  She's been giving me the cold shoulder lately and I'm a petty, petty person that also happens to be ineffectual everywhere in the world except in this tiny little slice, where I can at least wield the Crappy Sword of Omission.

So THERE, Edie.  I'll show you for ignoring me and/or crying when I pick you up and/or constantly arching your entire body away from me while looking pleadingly with your saddest eyes at your mom as if to say, "Save me from this monster, woman!"

Aw crap.  I already regret e-lashing out.  I mean, look at that smile?  Could that smile really mask a calculating, Daddy-hating little devil?

Yes.  I'm certain of it.  Which is a shame, because I thought we were still in the glory days of PO childhood.  Pre-Opinions.  Because we all know that the development of opinions is where child-rearing really goes south.

It won't be long now until we're there.  She's coming entirely off the bottle, is mostly eating whole foods - at least those that she's not throwing at me out of spite - and is more or less down to one nap.  This is the end of infantdom and the dawn of toddlerism.  Dark, dark toddlerism.

But I'm not depressed.  I know that it's only a matter of time before she comes back my way.  She's a girl, after all, and I hear that they love their Daddies.  Or at least she will once I start telling her what her Mom says about her behind her back.

I'm a petty, petty person.
Posted by Unknown at 9:24 PM No comments:

My friends who have taken their kids to Disneyland talk about the effort of keeping the kids settled down as the date approached - the stomach aches, the crazy energy, the incessant requests for updates on timeline - so it was with mixed feelings that we dealt with absolutely none of that.  From the moment that we told Finn that we were going to Cars Land until roughly ten minutes into our Cars Land adventure, four weeks later, he didn't seem to care much at all.

And then this happened.

Since we were in LA paying off several of my more poorly advised sport bets, we only had a day at Disneyland, specifically at California Adventure, but what a day it was.  Things to note about DCA: 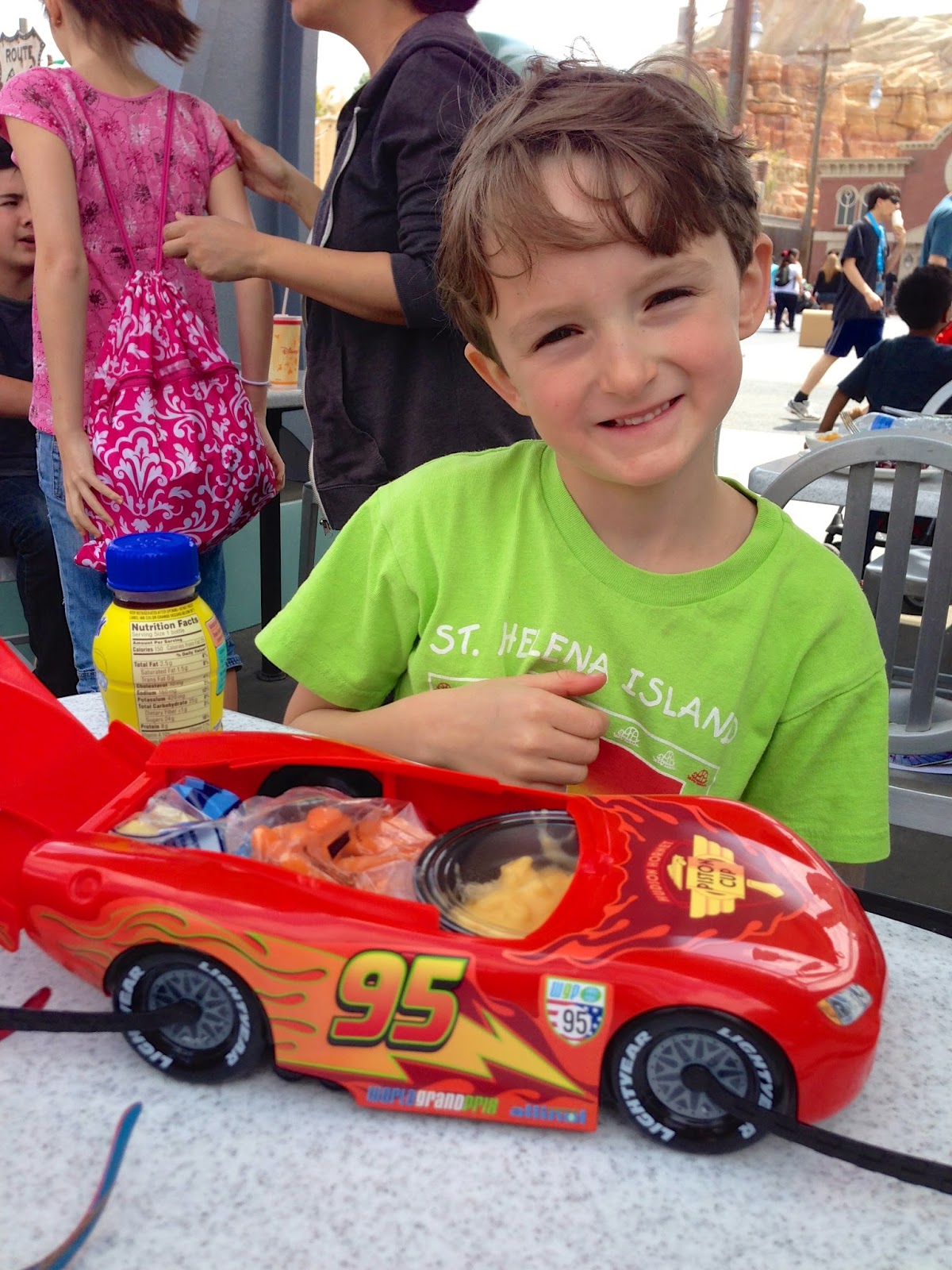 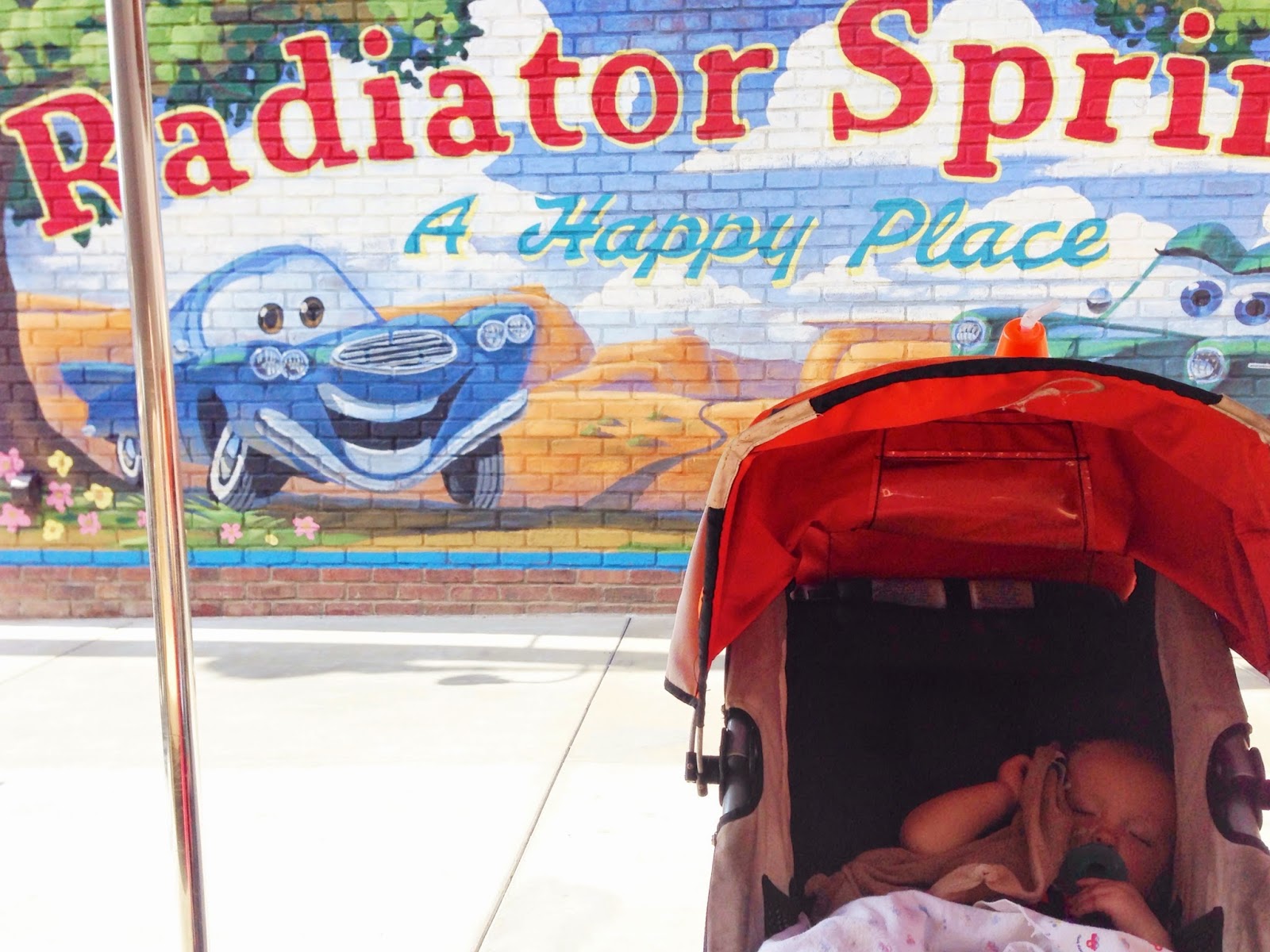 We only meant to spend 4-5 hrs at Disney, but in the end, we had to tear ourselves away after about 8.  That place really was the happiest place on earth.  Except for this weird floating tire ride in Cars Land, where everyone looked so disappointed in the ride's obvious suckiness that we had to avert our eyes and close our ears to Finn's repeated pleas to ride it.  Apparently he's not as in-tuned to tangible depression.

And while this vacation was clearly more for Finn, even Edie had a good time, dancing in the water feature outside a Bug's World and napping in Radiator Springs.

That nap proved crucial, because it enabled her to avoid passing out cold in the backseat of the rental car with her face in a paper bag.  Unlike her brother. 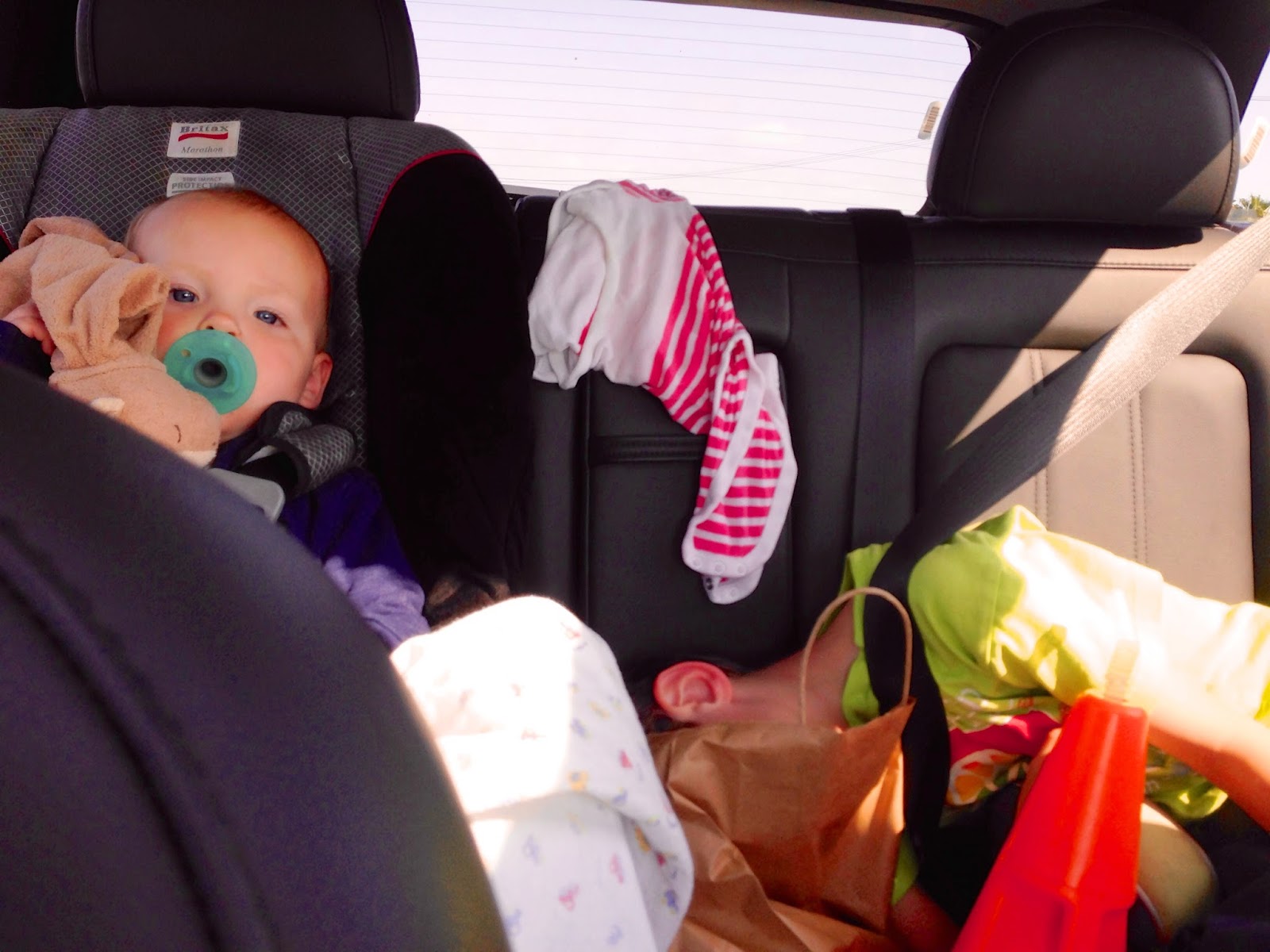 I think it's safe to say that we'll be back here.  In fact, I'm going to start saving my allowance right now.  Those Fireside Girls have expensive tastes.

Posted by Unknown at 8:49 PM No comments:

The Sky is Falling

The best part of Finn's school play this year, other than Finn's Oscar-worthy performance as Little Fox #2?   Edie's ridiculously loud raspberry right during a quiet lull.

Nothing like getting heckled by a 13-month-old to break your stage confidence.

In the absence of anything insightful to say, check out his awesome fox fur coat: 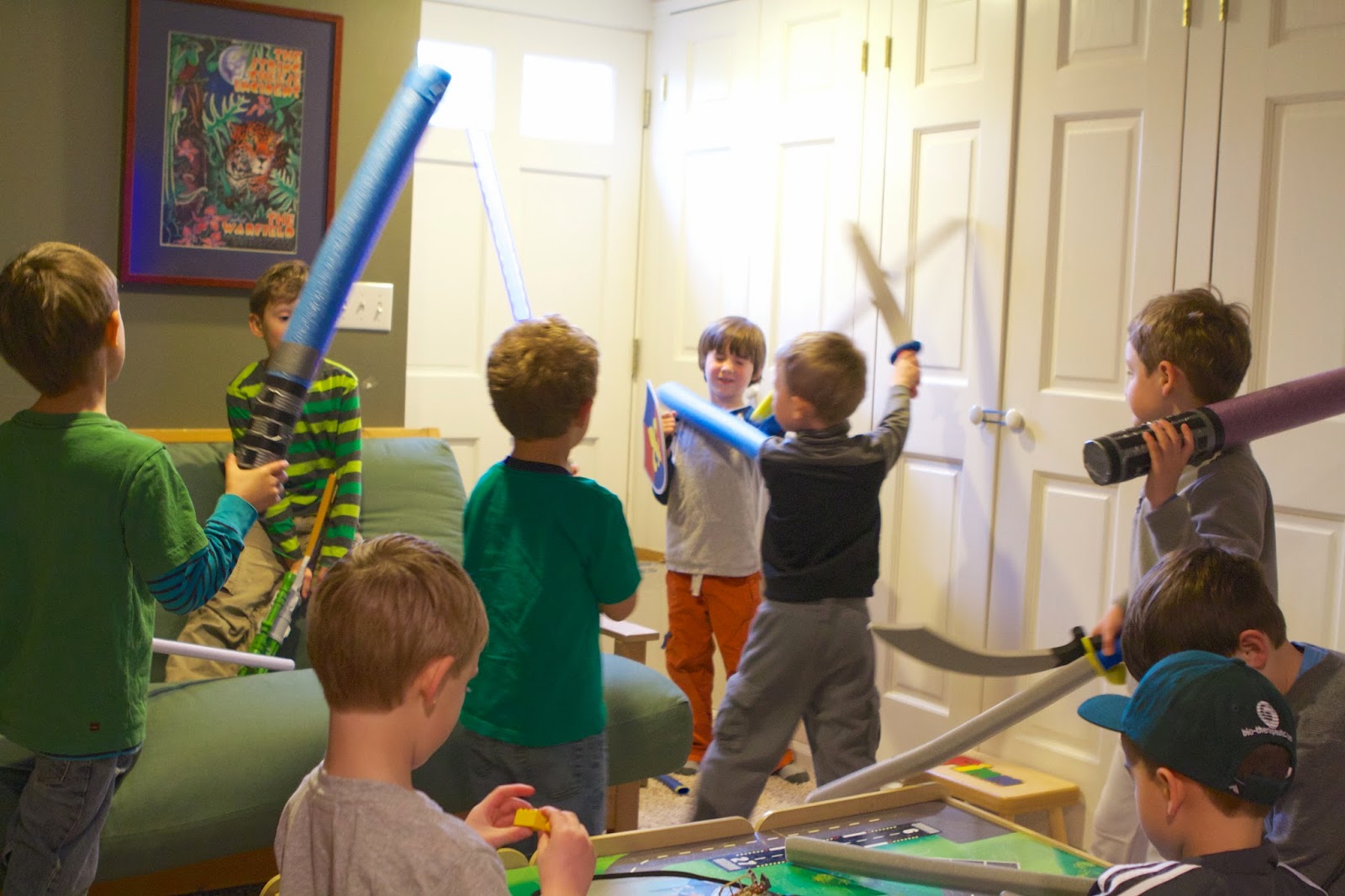 Finn's birthday party was last weekend and it's taken me this long to drink myself steady enough to be able to write about it.  Turns out that inviting nine 6-7 year old boys into a house filled with swords & Legos isn't as relaxing and stress-free as it sounds.

Five boys?  Probably OK.  But once you've hit nine, you've achieved a statistical scale which ensures that the following will happen:


And this was just in the first hour.  It's enough to make a guy start drinking beer surreptitiously from a coffee mug at noon.  In theory.

Mostly what we learned is that with that many kids, someone is bound to be a jerk at all times.  Not your kid, of course, person-who-is-reading-this-right-now.  Someone else's kid.

From here on out, we're either doing all outside parties - which will be tough in March in Seattle - or we're just dropping the kids off somewhere where professionals can manage them.  Like the zoo.

My heart is already racing just thinking about next year.  Where's my coffee mug...