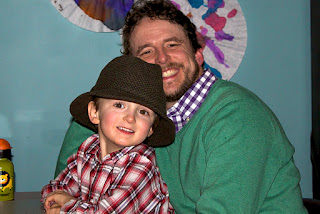 Things that fatherhood has taught me that I'm not good at and/or jobs at which I would undoubtably fail, according to Finn:


Jobs that I am not good at, but would like to have:
Child hairdresser - $20 for 10 minutes of work.  Plus tip.  Plus a bucket of lollipops within reach at all times.   Minus a urine-soaked barber chair.  Still ends up ahead.

Jobs that I am apparently OK at:
Convincing my son that '80's pop-metal is not only a legitimate genre, but that its heyday does in fact represent a singular moment in American and rock history - he loves the Hair Nation.

And that makes it all worthwhile. 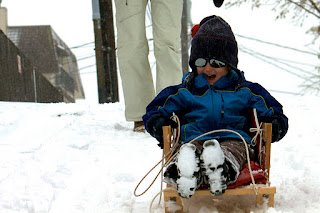 Lest you think we didn't survive Seattle's Armasnowmapocalypsegeddon, allow me to reassure you that we came through it just fine - even though it did mean that we had to spend waaaay too much time together cooped up in the house.

Normally you would assume that a snowstorm and a three-year old would be a recipe for snowmen, snowball fights, snow angels, learning how to write one's name in the snow, etc., however it turns out that our adorable little dirt-eater is no big fan of the snow.

Or more accurately put, no big fan of the cold and wet that accompany the snow.  We did get to enjoy about 15 minutes of sledding down our alley, but that was about all it took for him to get cold and wet and therefore disinterested in being outside any longer.

As we (eventually) learn our lessons about these things, we didn't even try to get him onto the mountain last weekend while we went skiing, and were content to let him watch movies in the lodge with a rotating support cast while we skied.  Since it's really all about us, as long as he's cool with a day spent watching movies and drinking hot chocolate, he'll get a free pass for the remainder of the year.

Next year will be a different story.  If this "family" thing is going to work out long-term (for us), he's going to need to learn to love to ski.  Once he's four, force-feeding that love down his throat can be outsourced to the ski instructors at the mountain.  I'd have signed him up already, but I don't know where to get a fake ID for a little kid.

He'd better enjoy these lazy mountain weekends, because pretty soon he's going to have no choice but to have fun in the snow, or... um... else!

On that note, I'm also signing him up for Little League/Tee-Ball this year just so I can watch him run around in a uniform.

He'd better love that just as much as he loves skiing.
Posted by Unknown at 9:29 PM No comments: 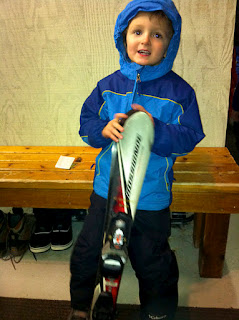 Fun fact:  a 38 year old male's motivation to write blog posts is in direct inverse proportion to the number of inches on the new TV that he and his wife bought themselves for Christmas.

Add to that a general fatigue resulting from the extremely unfortunate position of finally weaning a nearly-four-year-old off the daily nap and you have a recipe for extreme sloth.

I know, you're probably thinking that at almost-four, he should be well past the long daily nap, but that three hours of downtime in the middle of the day has really become special to us.

I mean, losing that time is like losing your lunch break at work.  Sure you can live without it, but you'd much rather be spending that time drinking malt liquor out of a paper bag in the parking garage than working/parenting, right?

Finn apparently feels the same way.  He's not really adjusting to the lost nap all that elegantly.  He now prefers to spend that three hours informing us in detail - either through words or actions - of all of the ways that we're ruining his life.  We are now in the position of having to decide whether we concede the nap and deal with a kid that won't go to bed until 11 pm, or if we push on through the nap, putting ourselves in the position of living with - and negotiating with - a three-year-old terrorist.

Sometimes we're lucky enough to do both.  After a disastrous attempt at skiing on Thanksgiving brought on by the weather, we decided to try again on New Year's Eve.  This time we were intent on doing it right and renting Finn some big boy skis instead of the little strap-ons he was using in the hopes that it would give him some more support and generally cause him to fall in love with skiing.   Kitty and I split up, with her taking first runs on the big girl slopes while I took Finn on the rope tow, with the plan that we switch places after an hour or so.  After getting him all geared up, skating across what felt like the entire mountain to get to the rope tow, and muscling our way up the entire tow we had probably our best run of his short skiing career.

After which Finn informed me that he was done skiing for the day.  I tried to convince him to take another run using my best motivation tactics:  threats.

Me:  "I'm afraid that if you don't want to take more than one run after all of that preparation, we just won't be able to go skiing any more.  It's too tiring for Daddy to do that all of that work."
Finn:  "Good.  I don't ever want to ski again."

Whoops.  After back-pedaling out of my violation of my cardinal rule of "motivation" (never threaten taking away something that you actually don't want to lose), we made our way back to the lodge in relative peace to wait for Kitty, who then got to spend the next two hours with a wailing banshee who wouldn't let her go to the bathroom or eat while I skied/called her from the chairlift to laugh at her sad predicament.

But it was all good in the end.  Finn actually fell asleep in the car on the ride home, which enabled him to make it all the way to midnight on New Year's Eve, which then enabled him to throw his first flaming meltdown of 2012 at approximately 12:15 AM on Jan 1.