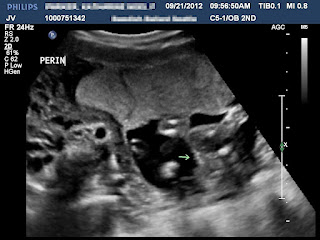 Yes, Rookie is a Rookette.

Our ultrasound on Friday was about an hour long, with the big reveal not coming until the end, so I spent the first hour confidently patting myself on the back each time I was certain that I spotted the boy parts - even though the technician was weirdly calling them "kidneys".   I chalked that up to her error, due to my extensive expertise in ultrasound analysis.   Of course, we won't know for sure until early February, but I'm willing to concede that perhaps she is a little better at this than me.

This is both awesome and terrifying.  Awesome for the first twelve years and then terrifying for the next 6-10.

I mean, have you seen what girls are wearing these days?  YIKES.

If any of you fathers-of-girls out there have any good recommendations for scary looking guns that I can be cleaning & cocking at the kitchen table in about 16 years, message me offline.  I'm not sure my 1982 Crossman Air Rifle is going to adequately get my point across.  Unless... I pump it more than the maximum recommendation of 10 times.  That'll be SURE to scare 'em off. 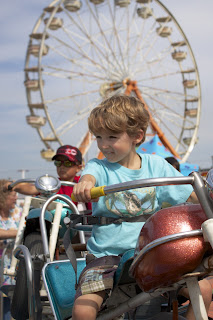 Tomorrow is a big day around here.  Yes, that's partly because the new iPhone is set to arrive - which I was assured of at purchase, even if AT&T refuses to update their #$%@ website with a tracking number, *breathe* - but moreso because we will finally learn whether Kitty is gestating a Rookie or a Rookette!

I've got $20 on it being a Rookie, mostly because I don't want to have to learn a whole new set of confusing baby parts, but I'm conflicted because the lazy in me also really doesn't want to have to repaint the ridiculously pink bedroom/guest room that we inherited from the previous owners.  Not that a boy can't love pink, as evidenced by my wardrobe.  So I guess I'll win on any count.  Which is nice.

Another good part about tomorrow is that we're flying down to San Francisco to meet Finn's newest cousin Josie.

Actually, there should be a comma in that last sentence.  It's not like Finn has lots of cousin Josies and this is just the newest one.  This is his newest cousin, Josie.

Wait, what were we talking about?

Right, San Francisco.  This is going to be a fun family trip - and a productive one, as we have an ulterior motive.  This is going to be a dry run to see how Finn handles the fact that we're laying all of our attention on a new baby and completely ignoring him.  Hopefully he handles it well, but in a worst case scenario, even if he freaks out and stabs the baby, at least it's not our baby.

OK, I've got to admit, I've used that joke before - in fact all week.  I think it's really funny.  Nicole & Keith, probably less so.

Speaking of things that I think are funny, Kitty & Finn pulled into the driveway about the same time that I did this afternoon, so I went around to Finn's door to open it up and give him a welcome-home hug.  Since he was still buckled in, I decided that I would have to modify the plan and asked him if I could hug his head, followed by hugging his hands.  He thought this was hilarious.  When he got out of the car, he decided to play along and asked me if he could hug my... penis.  And then my poop.

This Montessori school must have a very risque curriculum.  I really hope he doesn't stab Josie this weekend, partly because that would make the trip back to the airport awfully awkward, but mostly because I'd hate to miss moments like that if Finn had to go to jail.
Posted by Unknown at 9:05 PM No comments: 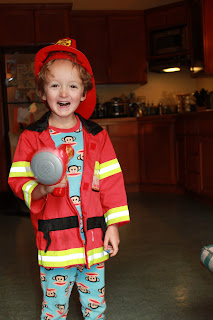 There are times when I think that my son is not just the smartest four year old on the planet, but is perhaps the smartest being that has ever lived.  I'm sure that this is not an uncommon phenomenon with parents - particularly those that only currently have one child and thus can only compare their children to their cats, one of which has lately taken to joyously rolling around in his own kitty litter like it's not a giant urine-soaked poop-bath.

Even if that is the benchmark, I'm still pretty convinced of this kid's smarts.  It's not uncommon for us to get pretty wrapped up in deep conversations about baseball, the cosmos and/or how we'd react if our neighbors started hitting toilets over into our yard like tennis balls.  (We'd cry.)

Sometimes, it gets a little out of hand.  A couple of weeks ago, we were discussing the Rookie and trying to determine whether he/she would be a boy or a girl.

How did we end up here?  That's not cool.  I'm not ready for this.  Let's get back to discussing why home plate is the only base that doesn't have "base" in its name.

Luckily that was the end of the conversation, probably because I reached over and stuffed the hot dog into his face, and he hasn't brought it up again.  And perhaps that's because this was just a brief moment of clarity in an otherwise toilet-tennis life.

Kitty had an appointment tonight, so I took him out for our semi-regular Daddy/Finny pizza night, during which we played pinball, drank beer/apple juice and had some great conversations about his friends at school.  On our way out to the car, he stopped at the side of the road and turned his foot sideways on the ground.

At this point he slowly looked up at me and while staring me straight in the eyes just said:  "Just had to put my skin on it.  Rub a dub dub."  And then he started walking away.

Now that's the kind of four-year-old conversation that I can handle.  Rub a dub dub indeed.
Posted by Unknown at 8:47 PM No comments:

So, it turns out that Day 1 of school is actually pretty boring.  Or at least it was for us.  The biggest discipline issue we had was with Kitty refusing to follow the prescribed Jena drop-off/pick-up plan and insisting on delivery and recovering Finn herself.  We'll need to work on that.

Upon returning home and receiving the requisite parental grilling, Finn was unsurprisingly vague and non-committal.  Things we learned were "good" today:  the teacher & the playground.  He also confirmed that he didn't get scared and that his buddy Reid showed him around.

How boring.  Ah well, if there's not going to be any drama, at least there are first-day-of-school pictures! 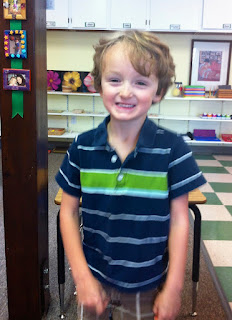 Tomorrow's a big day for the family.  No, it's not the new iPhone announcement.  That's next week.   And no, we're not buying a minivan.  I WISH.  No, nothing that momentous.  Just a tiny little event called:  Finn's first day of real school.

For the first time since he was just a few months old, Finn will not be making the trip to Jena's in the morning.  Well, actually he will, but that kind of ruins my story.  More on that later.

As I was saying, for the first time in ages, we won't be picking Finn up from Jena's in the afternoon... wait a minute.  Actually, we will be picking him up from Jena's.  Give me a second to remember what's changing.  Oh right.  It's the stuff in the middle.

Starting tomorrow, and for MOST of the day, Finn will now be attending pre-K at West Seattle Montessori instead of with his pals at TinyTribe, though his oldest buddies Reid, Layla and Grace will be joining him at his new school as well.

I don't know much about this whole Montessori thing, so I'm just going to assume it's a Ninja Training School, where his schoolmates are giant mutant turtles and his professors are all anthropomorphic rats.  Or something.

Either way, what I do know for sure is that the only one that isn't completely shaken up and terrified about this whole thing is Finn.  For weeks now he's been asking about when he gets to go to his new school.   We finally went to orientation last week - where the picture above was taken - at which point, upon being informed it was time to go, he begged to be able to stay for another half hour.  When I told him this morning that he would start his new school tomorrow, he threw his hands up in the air and yelled, "Yay!"

This is pretty much the opposite of how his parents are handling this, though we have maintained our composure in his presence quite well.  It's only when he's in bed that we'll start talking about what it will be like for him in a new place and how he's going to react if he gets scared or nervous, and how we're going to handle that.  But of course, that's life.  And we all need to learn how to get through those situations.

Finn of course doesn't seem terribly concerned.  We were talking the other day and he asked me what it means to be brave.  He said that he wasn't always brave because sometimes he got scared.  I told him that everyone gets scared from time to time, but that doesn't mean you're not brave.  Being brave is doing what you need to do, even when you are scared.

He thought about that for a minute.  And then he said, "Yeah, like when I'm fighting bears."

Exactly.  I think with the help of his new Montessori buddies Donatello, Raphael, Michelangelo, Leonardo and Master Splinter, those bears won't stand a chance.

Further to the Jena comment above, as she is determined to have us forever in her debt, she will also be taking care of Finn both before and after school.  What a sucker.  (Hi Jena!)
Posted by Unknown at 9:14 PM 1 comment: