Finn started walking at about 10 months, while Edie didn't start until she was exactly one year.  Edie's got a vocabulary that would put many of my peers from the Penn State School of Communications (I'm looking at you, football team) to shame, whereas I don't remember Finn having this many words until he was well beyond two.

But there's one thing that they're pretty much exactly aligned on:  looking adorable naked in backyards. 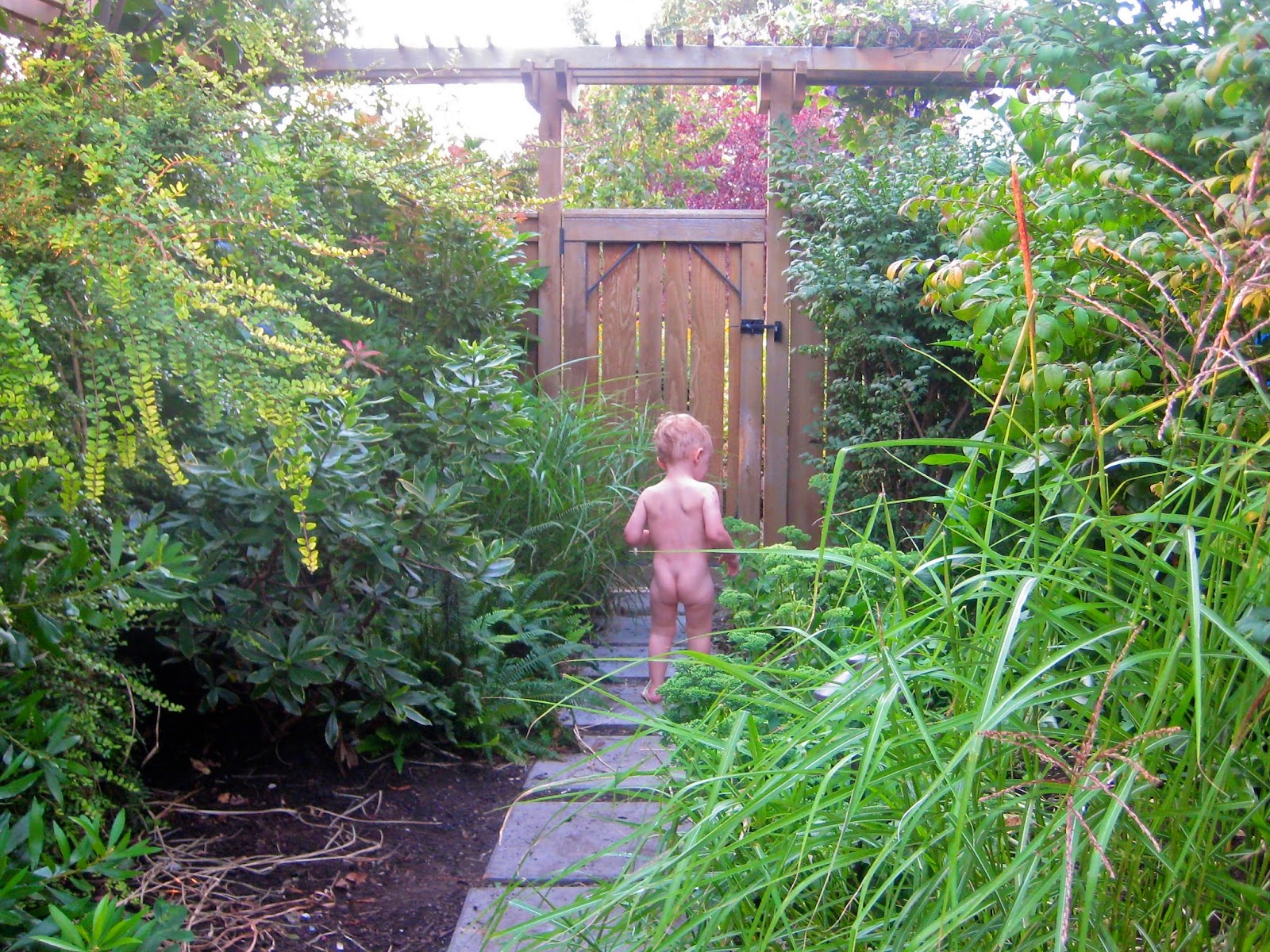 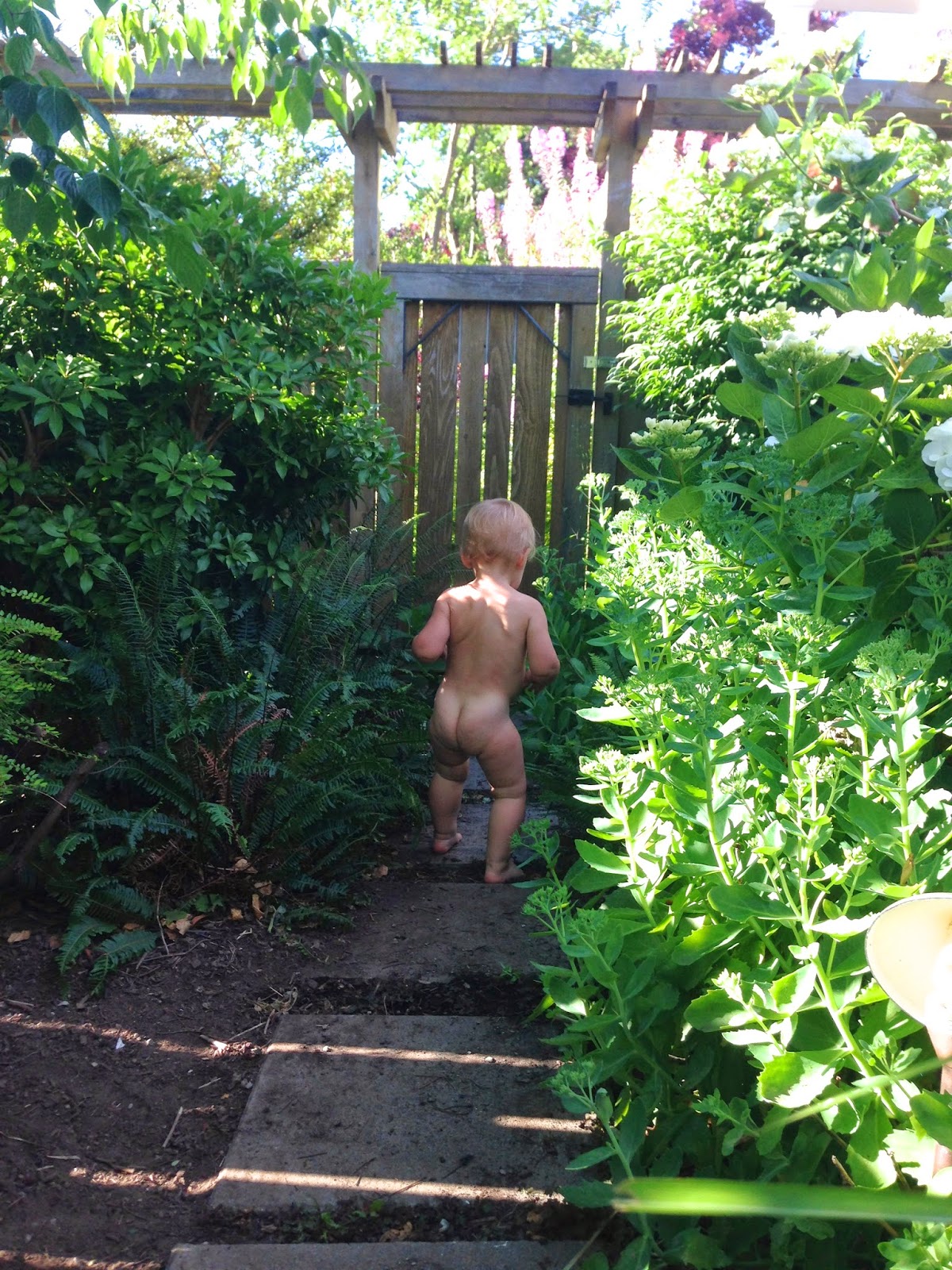 Not pictured:  Edie immediately topping her brother by pooping on the lawn, followed by Kitty chasing her around with a little blue plastic bag.

Not because I didn't want to picture it - I was just too busy laughing to frame the shot.

Ah, summertime.
Posted by Unknown at 2:47 PM No comments:

I think I've figured out why Edie's such a tyrant and why she's so quick to resort to fisticuffs. 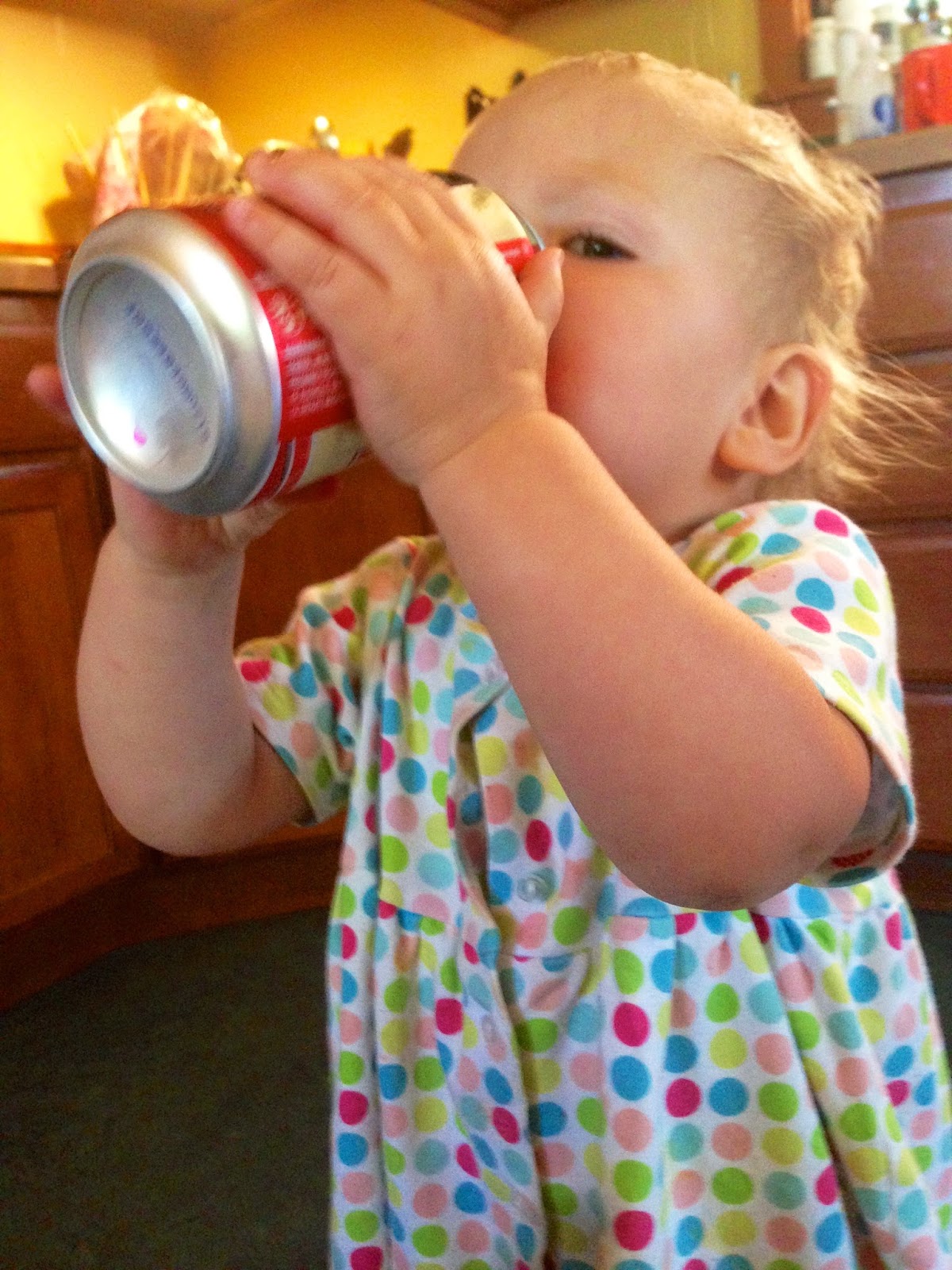 Yes, she drinks too much.

At least she does when Mommy leaves me and the kids alone for the weekend to head off to some hifalutin birthday party in Sonoma.  What else are we gonna do, but lay around the house drinking Tecate and peeing in our pants?  It's fun for the whole family!

Less fun for the whole family is when Mommy comes back to Seattle with a crippling cold.  Nothing like the giddy anticipation of some parental help after single parenting for a weekend, following immediately by the crushing realization that you're now parenting three little babies instead of two.

Looks like we'll need more Tecate...
Posted by Unknown at 8:40 PM No comments: 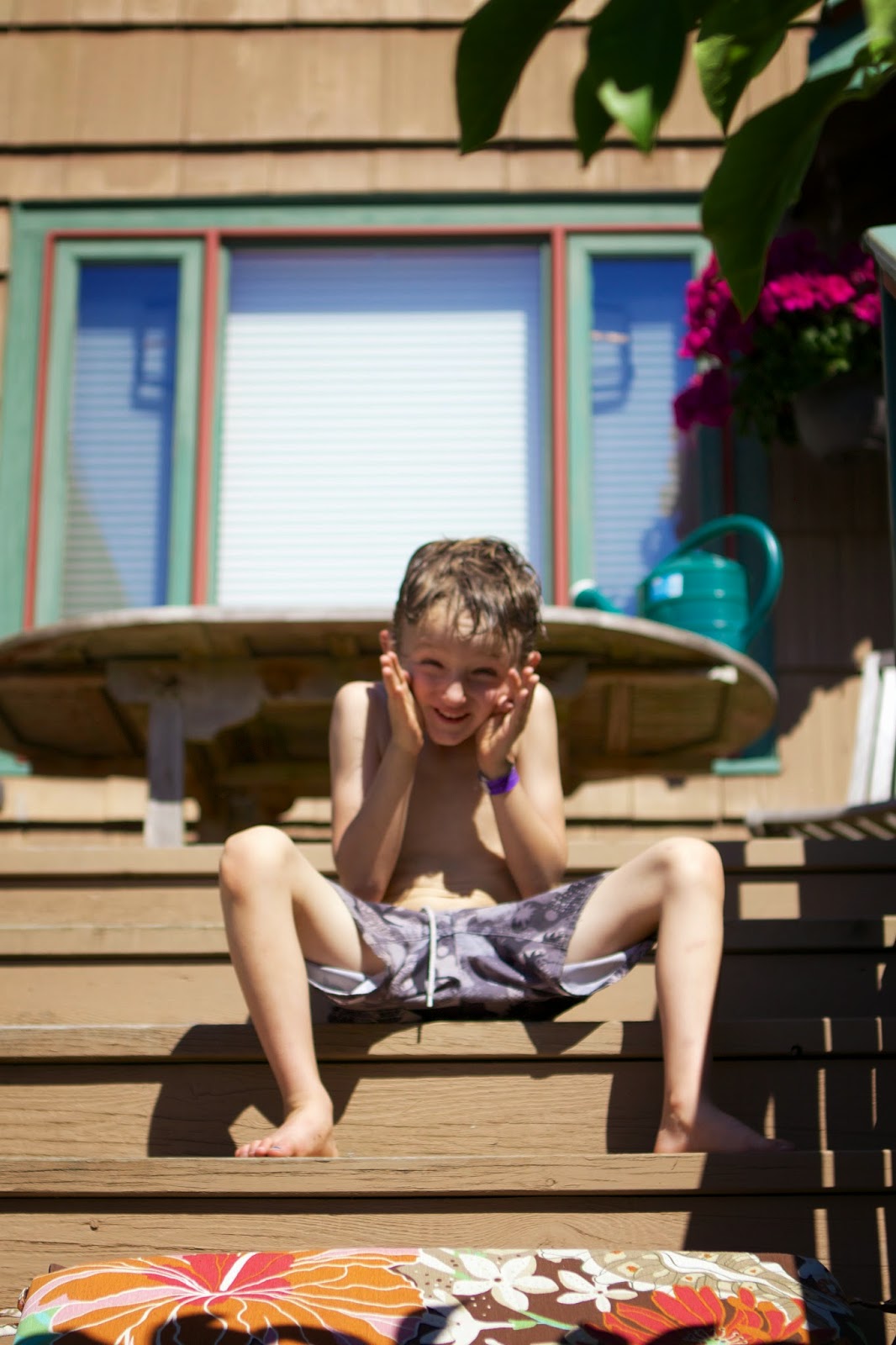 From the moment Finn's junk emerged from the grainy depths of the ultrasound machine, I knew that it was only a matter of time before he and I came to blows.  I mean, it's a story as old as time itself - the son grows up and eventually seeks to assert himself against his terribly handsome, witty and charming father.  Who has great hair.  And used to drive a really cool van.

So I've been waiting.  Waiting for that moment when Finn would square off against me... ensuring that only one of us would walk away from the encounter on our feet.  By which, of course, I mean me.  While he lay rolling around on the ground on accounta the fact that I kicked him square in the testicles.  With age, comes wisdom.  Punk.

But as it turns out, that wasn't to be the first familial throw down.  No, we male Parkers are a loveable bunch.   We give hugs, we don't fight.  Not like the female Parkers.  They're the physical ones.  At least one of them is.  It turns out that the smallest female Parker REALLY, REALLY hates it when you try to take the iPhone out of her hand.  You know when you hate something so much, that you would practically throw it in your mother's face?

Yeah.  That happened.  She was so mad at me for trying to take back the iPhone, that she threw it directly into her mother's face.  This is what it looked like immediately after.  I'd show you what it looks like now, but I prefer the actual visible blood in this shot: 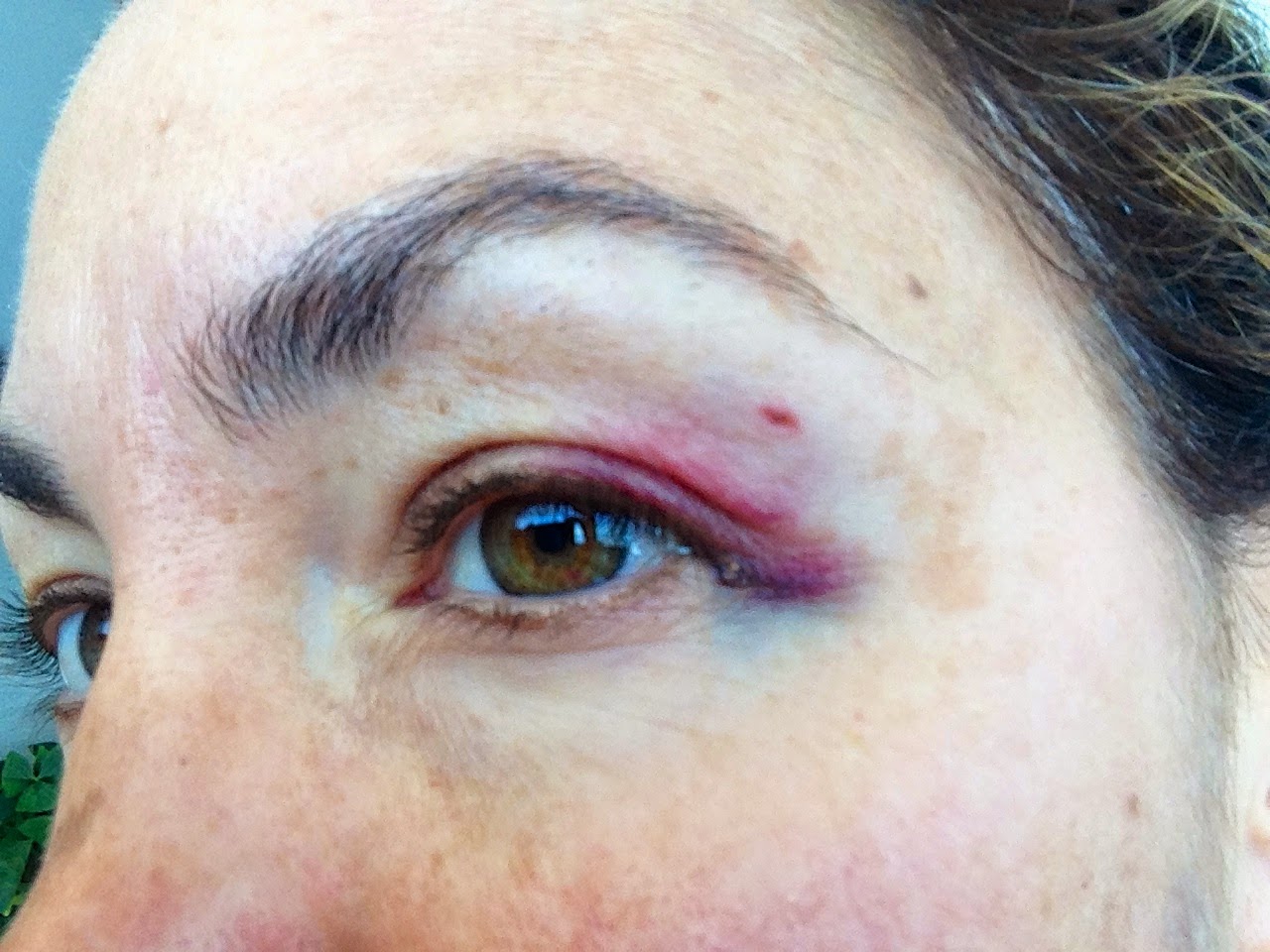 Isn't that awesome?  Of course, we all feel bad for Kitty, but that is some amazing damage done by a seventeen month old.   I can't wait to see what she does when she turns thirteen.  Poor Kitty.

If only she had testicles to kick...
Posted by Unknown at 10:29 PM No comments: 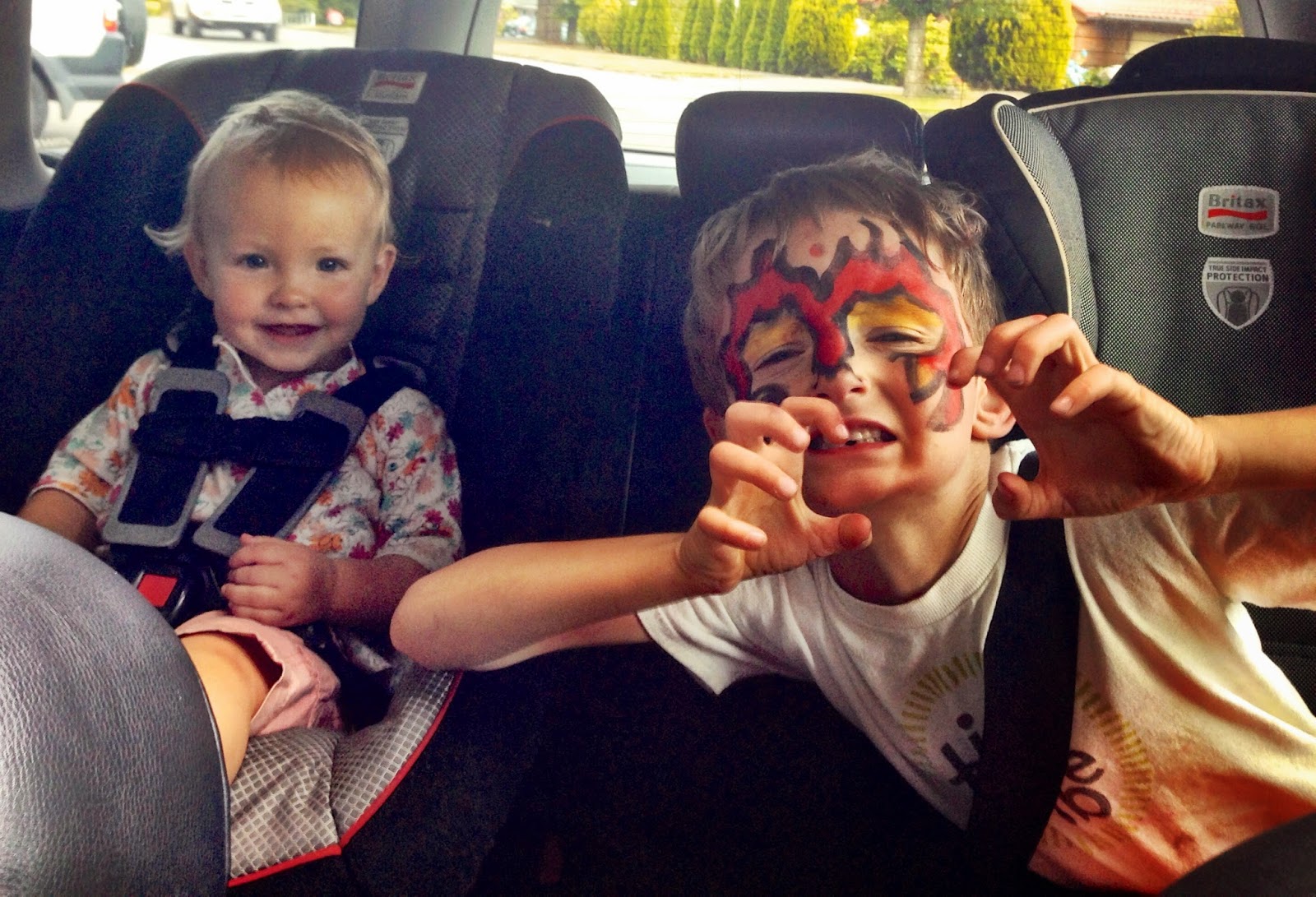 Hearing her say "shoes" or "elbow" digs right through your ears and directly into your chest like a tiny little baby Kevin-Bacon-Tremors-worm.  It's like listening to the most adorable Mötley Crüe song ever written, times ten.  You guys cry when you hear "Kickstart My Heart" too, right?  Right.  Well imagine ten Vince Neils and ten Tommy Lees surfing ten drum kits on ten rainbows while ten Mick Marses and ten Nikki Sixxes brood in the corner like ten little miniature unicorns and you're starting to get the idea.  Plus Jon Bon Jovi is also there.

Also adorable?  Her older brother, but in a slightly different way - the way that's less about how cutely you mispronounce words and more about how awesomely you're learning to punch people in the face.  Acceptably.

Finn just completed the Leap of Faith program, which is a really cool kids program focused ostensibly on self-defense, but really on building confidence - something that my awesome son, who has unfortunately inherited my shyness, can use.  Through teaching kids how to use all of their "powers", like seeing power, feeling power, voice power and more, it sets them up to focus not on the things that could hurt them in the world, but rather on how they're setup to be safe, happy & healthy.  In other words:  not what they can't do, but what they can.

It was inspiring watching Finn punch a 6' 5" dude in the face during the graduation ceremony to demonstrate how he'd escape from someone grabbing him.  But it's even more inspiring watching him walk more confidently across the street and generally be more comfortable in his skin.  It's not like he's a completely different person, but there's a stronger vibe in the air.  Of course, a large part of that is that Kitty and I have also been coached on respecting boundaries as part of giving him the ability to put them up.  As much as I dislike the fact that I am no longer supposed to hold him down over his pleas and cries and tickle him to death, I can certainly take the long view on this one.

But perhaps the greatest improvement we've seen?  He now loves getting his picture taken.  I'm not sure this is due to the program - causation/correlation blah blah blah - but still... we needed more pictures of Finn.  Otherwise, we'd only have pictures of adorable Edie.

And I'm pretty sure that would explode all of your brains & eyeballs.
Posted by Unknown at 10:38 PM No comments: