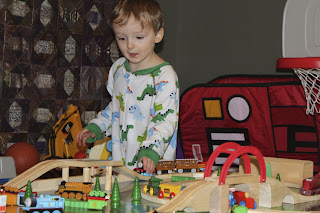 The dust has finally settled, and though the dishwasher & garage door opener still don't work, things are starting to get back to normal. Finn is still not clear on the fact that Christmas is over, however, and is repeatedly asking to open more presents. The first words out of his mouth upon waking from his nap yesterday were: "Now we open more Christmas presents?"

Of course, I reminded him that Christmas was over and that there were no more presents - as Kitty was walking in the door with more presents. So my credibility is shot. Not like he was listening to me anyway. If I come up the stairs and roar like a monster if he's not expecting me, he'll get scared and run to the other side of the house with his toys before he even looks over his shoulder. However, if I threaten him that Santa only brings toys to good little boys and girls that use the potty, he'll just shrug, wet his pants and ask where his presents are.

Although in his defense, and as he pointed out to me a couple of days ago, "the potty takes a long time."

Aside from the Money Pit issues noted earlier this week, Christmas was a huge success. Finn and I have discovered that we both have an affinity for his new train table - me for setting it up and him for immediately knocking it down with his new toy garbage truck - which I'm sure we can eventually parlay into a much more expensive electric train habit. Turns out that setting up those wooden tracks without instructions isn't easy. It took Rob and I at least an hour on Christmas Eve just to make a rudimentary oval. The weird part is it didn't take us nearly that long to drink that bottle of tequila beforehand.

We had Mema, Keith, Nicole & new-cousin-Leni in town, which was great, though Finn did show a little bit of jealousy around Leni - which manifested itself into a weird Linus-like blanket affectation for a couple of nights. Not really sure what was up with that, since it was gone as soon as it arrived. He did maintain Linus-brain, as he informed me that today's brief snowstorm's flakes "need more sugar."

Now, according to Finn, the only thing remaining for this year's Christmas is to return our tree to the field from whence it came. I'm definitely not making that drive again, so I'm thinking he'll be equally as happy when I tell him that we're returning it to a garbage truck.

We can even throw one of the little trees from the train table in the back of his toy garbage truck and reenact the scene ourselves, with the addition of mass destruction across the railway.

I'd better get to work building the track. Where's that tequila?
Posted by Mommy at 3:06 PM 1 comment:

Let me preface this by saying, I'm typing this entire post on my iPad. Our laptop died three days ago. And our dishwasher died two days ago. So if you're keeping score (and if you're anything like me, you are), here's the rundown for our last couple of weeks:

'Tis the season, my friends! Here's to your health, and continued home maintenance!

Now excuse me while I find something cheap to grill.

- Posted from my iPad
Posted by Unknown at 8:57 PM No comments:

Posted by Unknown at 2:03 PM No comments:

Those of you that follow Jena's blog will have already seen this, but if you haven't yet, please be sure to watch it until you get to the ice skating.


I wonder if they make those things for skiing. That will seriously increase my beer time at the lodge.
Posted by Unknown at 9:51 AM No comments:

When it rains, it floods 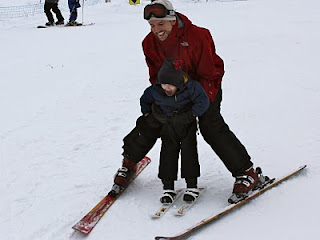 This post was supposed to be about our big ski outing last weekend up at the cabin; the weekend where Finn actually took his first run, seen at right. His style more closely mirrors "noodles on ice" than it does Super G, but I'm hoping we can turn that around with some intensive training this season since the Pineapple Express is currently burying us in precipitation. I hope he's up for it. Tough to tell, given how close to the vest he's playing his emotions in this picture.

He also enjoyed hanging out in the lodge after daddy got tired of carrying him up the rope tow after three whole runs down the bunny hill. Who needs a mountain when there's a table to crawl under and a big Christmas tree to topple?

The only thing missing was a bar that didn't have an absurdly late 11:30 AM opening time. Don't they know that there are parents that frequent that mountain? How can I wait until 11:30 for a beer when I've got to get him home for a nap at 1 PM?

That question was never answered, no matter how many times my companion, Captain Inappropriate, loudly repeated it.

Yeah, that's what this post was supposed to be about, until we returned home from the cabin to find the same Pineapple Express noted above had flooded our basement. For those of you keeping score, that's three floods in three years - though I can't really fault our clearly Swiss cheese foundation for the cat-flood. In fact, given how porous it is, it may have actually helped the water drain back out of the house.

Luckily, no Christmas presents - currently stored in the same room that appears to house the front door for the flood waters - were damaged, so Christmas will go on as scheduled. Also luckily, this was a relatively small flood (and I'm now very good at cleaning floods up), so everything's dry and back to normal.

And lastly luckily, I didn't have to wait for a mountain bar to open to help medicate myself through that situation. And that's the most luckily of all.

Posted by Unknown at 9:02 PM No comments: 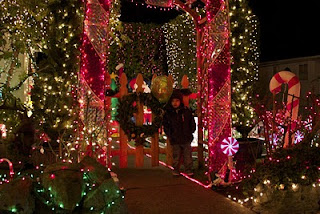 While I knew it would be tough leaving Finn for a week to go traipsing around the Caribbean, I was not prepared for the most difficult part: retraining us all on our roles in the family upon our return. Our first inclination once home was to spoil Finn, but that coupled with his first inclination - which was to completely exploit us - added up to a week of extreme whining.

The whining I can deal with. What I wasn't prepared for was the shark bite Finn applied to my chest in the middle of a whine session. That caught me a bit off guard.

I'm happy to say that I think I handled it well, insofar as I didn't kill him on the spot. Kitty handled it far better by sending me to the basement to watch TV while she took Finn upstairs.

The whining got markedly better toward the end of last week and heading into the weekend we were almost back to normal. Apparently Finn felt that he had punished us enough and was willing to let bygones be bygones. And so it was with great anticipation that we headed out to Christmas Creek on Saturday for our tree and another shot at a Santa picture. I bought a new camera before we went to Belize, so I was really counting on being able highlight the definition in Finn's tears as we put him on Santa's lap.

We got to Christmas Creek early and were first in line for Santa. Too early it turns out, since we stood there for 45 minutes waiting before finally bailing out because the little Santa cabin was getting too claustrophobic. Unfortunately, that much waiting had taken its toll on Finn and he spent the remainder of the trip moping & crying. Since he refused to explain why he was crying, we were forced to assume it's because he hates Christmas. That or his hands were cold, since it was 30 degrees out and he wasn't wearing mittens. One or the other.

Of course, after we left the Christmas wonderland and drove ourselves all the way back to Seattle, Finn was magically happy again. And as I type this now, he is rolling around on top of a balloon... pants/underwear-less.

In other words, everything's finally back to normal.
Posted by Unknown at 6:47 PM 1 comment: