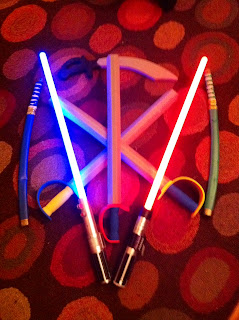 Finn started complaining in the car the other day that his butt... excuse me, "behind"... hurt.  His explanation:  "I think I have a radish."

Given that he's never been to a Sizzler salad bar and therefore the only radish this kid has ever seen is on the side of the Amazon Fresh truck that delivers his lazy parents' groceries, we're pretty sure he meant rash.  Considering the crap we've been feeding him and the non-stop Christmas festivities, we're not surprised.

Of course, radishes weren't the only things he got this Christmas.  In addition to all of the trucks and playsets he's been pining over for the last month or two, he also got swords.  Lots and lots of swords.  Enough to beat me over the head with a different one every five minutes of the day while I "work from home" this week.  Foam swords, pirate swords, samurai swords, and... oh yes, working lightsabers that light up and make cool battle sounds when you swing them around.

All of the sword fighting has even motivated Finn to add a new word to the family vocabulary:

Spain - v. to hit really, really hard with a sword, "to where you make a clanking sound."

Allow me to use it in a sentence:  "If you get spained too many times on your behind, you might develop a radish."

I should actually correct a point about the lightsabers: they're not both his.  The red one is mine.  I've spent the last couple of days alternating between checking email and trying to convert Finn to the dark side of the force.  No luck so far, but I'll keep trying.

Or I'll cut off one of his hands.  I've seen the movie.  I'm pretty sure those are the only two options.

Posted by Unknown at 7:32 PM No comments:

"Most People Call Me Finch" 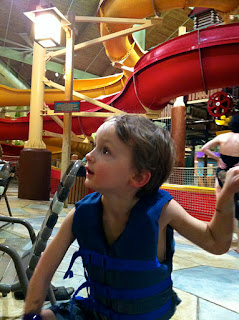 As I sit here typing this, my shoulders are killing me from the epic weekend that Finn and I spent together.  With Kitty otherwise occupied, Finn and I spent the time alternately ice skating (with TinyTribe), on waterslides (at Great Wolf Lodge with Max and Tatman), or jumping on humongous inflatables (at Pump It Up for Theo's third birthday party).

The waterslides were probably the most epic, being that they were Finn's first and the Great Wolf Lodge is like Vegas for the pre-drinking set (and for the drinking set, given that they let you bring your beer right up to the edge of the pool), but I think it's that last one that did my shoulders in.  Finn didn't want to do the inflato-slides himself, probably still smarting from getting tossed around on the waterslides, so I was forced to embrace my inner three year old and bounce along with him.

After a couple of days like that, what we all need is a nice mellow weekend... which we are absolutely not going to get any time soon.  Our dining room is filled with Amazon.com boxes - a move that I am certain we will not be getting away with any time in the future ("Yes, Finn, Santa drop-ships some of his stuff here to save on fuel costs.") - our front yard is filled with Christmas lights, and Finn's bed is filled with a squirming ball of anticipation that no longer wants to go to sleep.

He also continues to struggle with this whole holiday spirit thing, despite our attempts to instill it in him by force.  His G'parents and I took him to the Children's Museum the other day, where after having multiple requests turned down in the gift store, Finn informed me that he "wasn't going to deal with me, because [I didn't] have any money."

Of course, I'm not putting too much stock in what he says these days.  He also informed me this weekend that most people call him "Finch".  When pressed for the names of the folks who call him Finch, he would only reply:  "most people."

Perhaps I'm not giving him enough credit.  This may all be misdirection.  After all, "Finch" is bound to be a in a better position on Santa's list than Finn...
Posted by Unknown at 9:50 PM No comments: 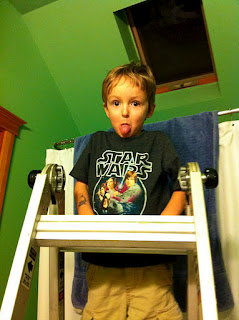 Finn deals in one currency these days:  treats.  His understanding of money is based on an exchange of silver for candy or popcorn.  His first thought upon waking is, "How am I going to get candy today?"  The first question that he asks when he sits down for dinner is, "What are we having for dessert?"

If he doesn't like my answers to these questions, he asks his Mom.  Or he asks me again.  Forty-seven times.

Part of this is our fault.  We spent about a month drip-feeding his Halloween candy to him, like a playground drug dealer, really establishing his sugar habit.  Upon realizing what we were doing, we had to call in the Potty Fairy's more attractive sibling, the "Candy Fairy", to come and remove the remaining pieces.

At least the Potty Fairy left a lame present.  The Candy Fairy didn't leave anything except for sugar withdrawal.  Finn is not a big fan of the buzzkill Candy Fairy.  (The Candy Fairy, on the other hand, can't wait for next Halloween.)

On the upside, his grandparents were here this past week, and since his grandfather has an appetite for treats that rivals his own, he was flush with cake & cookies.  But now that he's stuck with us again, it's back to reality - and that means back to jonesing for a fix of the good stuff.

This year, I would have assumed that I could really leverage Santa threats to help control things like candy-begging, but it's not working.  We even have an Elf on the Shelf - that Finn very creatively named "I Don't Know," as in, "What should we name this elf?"  "I don't know." - who's supposed to be reporting back to Santa daily.  Unfortunately, Finn pays about as much attention to the elf as he does to my requests that he not run his hands around the inside of the toilet bowl right after using the bathroom.

That is, not at all.

We need to get this Santa thing worked out ASAP.  Bribery and fear are the only tools I have in my parenting toolbelt to combat this sort of behavior and I'm afraid that right now, my toolbelt is empty.