Finn has handled this whole new sister thing exceptionally well.  He's been attentive (for the most part), helpful (or at least as helpful as he usually is), and generally cheerful and unaffected.  It's a huge relief and it makes this whole newly expanded family unit extra lovey, huggy, happy.

On the other hand, I swore at Edie for the first time last night.

This is not unexpected.  I love me some swearing and I'm not exactly the most patient person in the world, but I had hoped to at least make it a month into her life before swearing at her.  Sigh.

Turns out, she can be kind of a wanker around bedtime.  I shouldn't complain.  She's been pretty solidly mellow for the last two weeks.  No tongue-tie this time around means she's eating well and that typically translates into sleeping well.

At least until it's my turn in the evening rotation.  Last night, I spent the hours from 9 pm to midnight with my pinky finger crammed down her throat to keep her from crying.

Wow, that sounds bad.  I mean, "letting her use my finger in lieu of a pacifier."  Because we don't have a pacifier.  Or at least we didn't, until last night.  Now I'm furiously jamming two different brands of pacifiers into her face every ten minutes to see if one of them will take.

No luck so far, but she can't hold out forever.  Or at least I hope she can't.  At some point she's going to be old enough to realize that I'm swearing at her.  And that will be awkward.

Edie Christine, a set on Flickr.
Posted by Unknown at 9:57 PM No comments: 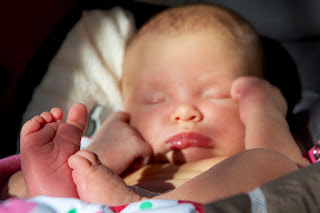 Turns out there are quite a few things that one forgets if one goes nearly five years between children.

In no particular order, here are a few of them:
I also forgot how well alcohol goes with paternity leave.

As a second time dad, one of the things that I haven't forgotten - and in face now much better realize - is how fleeting all of this time is.  Edie is only going to fit into her "I (strawberry heart) Daddy" onesie for so long before I'm calling in anonymous police tips about potential boyfriends and creating fake Facebook accounts so I can cyber-parent her.

I'd better cherish the crap out of this quiet time, just like I was cherishing the crap out of the nighttime race I had with Finn to Rite Aid last night.  We jumped shadows.  We fought bad guys.  We bought medicine to help Mommy put her lady parts back in order.  And beer.  OK, mostly beer.  Because Rite Aid has really cheap beer.

Is it wrong to have cherished memories of evening beer runs with your four year old? 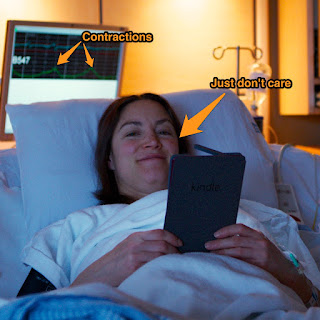 After the intensity of Finn's birth, I can sum up the Rookie birthing experience in one word:  boooooooring.   Turns out that once you add an epidural into the mix, the most exciting thing to happen in the hours of active labor at the hospital was trading baseball barbs with the nurses that were unimpressed by my Yankees hat while Kitty peacefully read books.

But don't think me dismissive.  If I recall, after watching Kitty endure 37 hours of pain-med-free labor the last time around, I judged her the strongest woman alive.  However, those same 37 hours broke something inside of me - it turns out, I'm not that strong.  And Kitty knows this.  So after accepting the epidural this time around, pretty much entirely to keep me from melting into a tiny weeping puddle while our daughter was born, I judge her both the strongest AND the kindest woman alive.

Beyond that, there's not much to say.  I wish I could tell a story about how we mistakenly walked out of the birthing ward with her and her security anklet still on, causing a full hospital lockdown and SWAT deployment, but that anklet fell off almost as soon as they put it on, so pretty much anyone could have stolen her without incident.  No good stories there, unfortunately.

So since there's really nothing to write about at this point, here are some pictures of Edie's first couple of days.  I'm sure there will be many, many more to come.