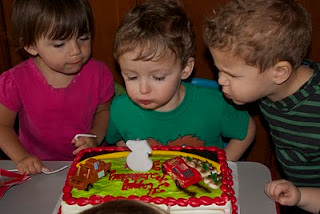 Finn and I had a lovely walk home from dinner last night - just us guys - where we alternately discussed who had farted last, who had farted loudest, and upon our return while lying in his bed last night, the proper method of cleaning a fart. (Spoiler alert: Per Finn, it's in the sink with a toothbrush.)
And so I say to you, Finn, on the third anniversary of your birth, that there is literally nowhere on Earth I would rather be than discussing farts with you.
Happy birthday, big guy.
Posted by Unknown at 8:53 PM 2 comments:

Trapped In the Closet 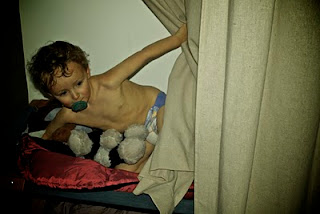 One of my fondest memories growing up is the time that I spent the weekend at the Concord with my friend Dave & his family at a convention they were attending. The weekend was memorable for a couple of reasons: the Concord had a sick arcade (and I could play a mean Zaxxon) and the convention had all kinds of freebies, like these slick little paper cutters that made us feel like we were packing heat. But the biggest hit was the fact that his parents let us sleep in the closet of the hotel room. I slept near the door and Dave slept on the elevated interior, which meant that he rolled down on top of me a couple of times, but that didn't matter because it felt like we had our own - poorly decorated and awfully cramped - little world in that closet.
I'm hoping that's exactly how excited Finn was when we pitched him into the closet of our room at my parents' house in Key West, as shown above.
In preparation for his weekend sharing digs with the laundry, we moved him out of his crib earlier this month. This was a big step - probably more so for Mommy, who had a hard time letting go of the crib and has even moved his crib bumper into his new bed - but it was overdue. If left to his own devices, Finn would have happily been carried to college in his crib, having never shown one iota of interest in leaving it.
Finn offered to help me break the crib down and even went and grabbed his plastic saw, which reminded me of how I put the crib together. I've never been one for reading directions too carefully, mostly just glancing at the pictures and trusting that I'll figure out how to make it all fit together. This approach works great when I'm playing around with software on the computer, but the confidence is questionable in the real world considering that it's never worked. Not once.
The crib was no exception. I got it 75% put-together, but the side rails weren't quite lining up. They were too wide for the frame by about an inch. After swearing at whatever illiterate Chinese sweatshop kid had managed to screw this up, I attempted to fix the issue the only way I knew how: with the circular saw. After cutting off both sides on one rail, I realized that I couldn't possibly cut off the sides on the other since there were pieces on it that were clearly needed to attach it to the sides of the crib. After scratching my head for an hour or two, I decided to do the unthinkable: read the directions.
It was then that I learned that I had used the wrong bolt holes to assemble the frame. Once that was fixed, the whole thing fit together perfectly - on the untouched side. Once I managed to locate and reattach the pieces I had previously sawed off, I was able to get the whole thing together again, albeit with a nice scar on the back rail to remind me of what an idiot I am.
It's a good thing that I'm not going to be my son's only male role model. He'll also have my brother, who knows his way around a tool box. Here he is showing Finn how use a power drill to reattach the [insert critical part] that I have mistakenly removed. 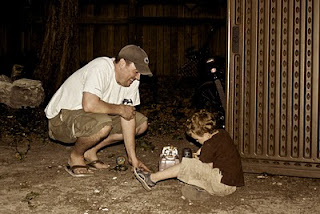 Posted by Unknown at 9:59 PM No comments: 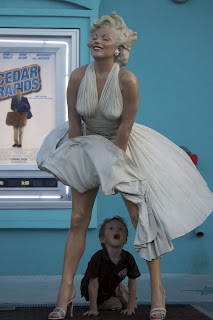 We have just returned from a much-needed vacation to the new Parker family compound in Key West, where the weather was criminally good, the company was outstanding, and new cousin Alex impressed the whole family with every smile and gurgle. Finn, in turn, wowed his easily-impressed Grandparents with his broken English and prodigious dirt-eating.
Seriously, that kid ate at least a pound of dirt a day.

And in case you're wondering, yes that is actually Marilyn Monroe alive and well in Key West. The likeness of Finn, however, is a statue. Amazing attention to detail. Notice the dirt ring around his mouth. 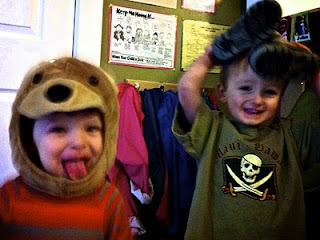 Talking to Finn is increasingly easier. He's able to not only articulate his thoughts in the form of infuriating opinions, but he's also starting to respond in a more thoughtful manner.

For example, tonight we were discussing the importance of washing one's hands:

Kind of a head-scratching finale - though if the washing machine doesn't actually use water, that would explain why it's the only appliance in our house that hasn't flooded the joint. He was either practicing his mom's conversation skills, whereby the speaker randomly eliminates portions of the conversation that he or she deems wasteful without informing the listener, or he was practicing his pre-school Charlie Sheen.

Which begs the question, when do random divergent comments like that go from being adorable to being cause for concern? If he doesn't figure this out before college, he's going to find himself in the "challenging" major of Communications, like his old man and the entire Penn State football team.

Speaking of, I think he's ready for college. He's proven that he's already a deep thinker. He had a major existential meltdown the other day when we passed an excavator that didn't have a dump truck.

WHERE DOES THE DIRT GO?

We had to pull over. It was heavy, man.
Posted by Unknown at 9:39 PM No comments:

Discovered this image on Found the other day: 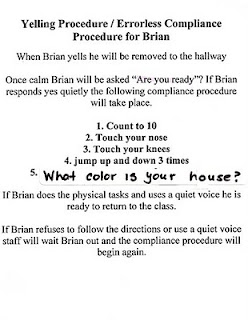 This is fantastic advice. Kitty should enforce this for both me and Finn. Unfortunately, I think we're going to have a problem with question #5. Finn thinks our house is red. I have no idea what you call the color, but I'm pretty sure it's not red.

We're screwed. I hope there's a TV in this hallway.
Posted by Unknown at 8:39 PM No comments: 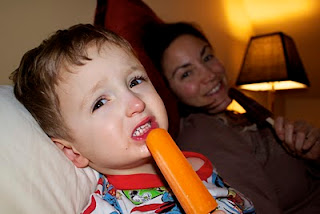 Finn started the day on the right foot today, informing his Mommy that he liked her scarf.
This is impressive in that it's the first compliment he's ever dished out. Given how sick the whole family has been this week, it's also one of the first things that he's said in days that wasn't attached to vomit. It's also a nice change of pace from the typical topics he reserves his words for, such as barking orders for more "garbage truck songs" on YouTube or complaining about having to spend five seconds on the potty.
He's taken an early lead in the Compliment-Mommy-Off that's bound to result, as I deal with the inevitable, "Your two-year-old son said he liked my scarf. Why don't you ever compliment me like that?"
Keep it up, kid. See if I'm so free with the popsicles next time you catch the flu.
Posted by Unknown at 8:41 PM No comments: