I had intended this blog post to be epic.  You were going to be blown away.

And then Ichiro got traded to the Yankees while they were here in town.  Obviously, this meant that I had to spend the week attending baseball games - mourning with my Seattle Mariners hat on, but celebrating with cautious optimism in the hopes that Ichiro can return to career form with my (much larger) Yankees hat on.

There was much beer consumed.  And very little blogging done.

So while I recover, I'll leave you with this:

I took Finn to his first concert last week.  Our zoo throws these gigs in a little field and it's a great Seattle summer concert setting, by which I mean the entire crowd is pasty white, no one is dancing, and everyone is silently judging you from the comfort of their $400 REI camp chair.

Vanilla Ice was one of the very first concerts that I ever attended, so I wanted to make sure that I was able to set Finn on the right path to attain equal staggering heights in the quality of his music selection.  A double bill of Grace Potter and ZZ Ward seemed like the perfect opportunity to achieve this.  Plus there was a beer tent and lots of friends with kids that I knew I could loop into free babysitting while I enjoyed it.

Either way, I know that when I informed him that it was over after Grace had the entire zoo on its feet through an extended encore, which he watched dancing on Jena's shoulders, he got sad and asked:

Not bad for a first concert.  I think this kid is now ready for Bonnaroo.  I hope they have cotton candy.
Posted by Unknown at 10:37 PM No comments: 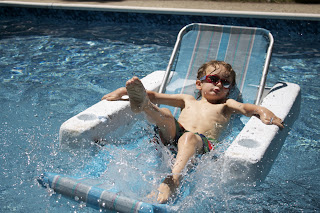 I could have sworn that I'd written about Vacation Finn before, but a quick scan of the internets/blogosphere came up empty, so here goes:  Finn loves vacation.  It really agrees with him.  Whenever we're on vacation, he's on his best behavior (usually), he listens (mostly), and in general is a real pleasure to be around (generally).

The only part of Finn that does not agree with vacation is his stomach, specifically with the entry/exit portion of the trip.  I know that I mentioned that he puked on me last time, but I chalked that up to severe turbulence.  Our flight back to NY a couple of weeks ago was pretty smooth, but we weren't taking any chances when he started complaining about his stomach on the flight.

You know how that old proverb goes:  puke on me once...

I had the bag out and everything.  I was ready.  I was so smooth that I was holding it with one hand and reading my book with the other.  Then we landed, and I relaxed.  And then Finn started really crying as we taxied to the gate.  He wouldn't sit still, so I put down the bag to pick him up.

Shame on me.  Thankfully, Kitty is a genius and was carrying wet wipes.  We sure needed them.

From here on out, we're not just packing an extra set of clothes for Finn in the carry-on, we're packing for the whole family.

Of course, after that rough entry, everything was sunshine and hot dogs.  Finn played in the pool and the creek with his NY grandparents; fell in love (with a Bostonian no less - curses!) at his grandfather's beach house in RI to fireworks (where he also congratulated his father for surviving said fireworks); and spent even more time back in the water in CT while celebrating his Mema's birthday.  Quite a bit going on, but after the flight in, nothing was able to top him again.  That is, until his Mom decided to give him a driving tour of all of the major landmarks of her childhood.

I believe he fell asleep somewhere between the store where she and Holly broke something one time, the place she bought her first field hockey stick, and a place where she had her best tuna fish sandwich.

I think I just fell asleep typing that.

Anyway, great trip, but so freaking hot that the only way to survive it was to plant yourself in the aforementioned pool/creek/beach.  Finn tamed the heat with a new game that he invented called "Fall Down Water", which consists of... um... falling down in the water.  Repeatedly.  And not gently, but violently throwing your body into the surf.  For like two hours.


We need to teach this kid how to swim this summer before he manages to kill himself on the edge of the beach.  That would be embarrassing.
Posted by Unknown at 9:45 PM No comments: 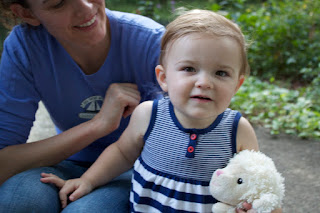 Finn is enamored with cameras.  I'm sure it has nothing to do with the fact that I'm shoving one in his face every 15 seconds and everything to do with the reaction he gets (extremely loud, sharp intake of breath) from me every time he picks up our nice camera and threatens to take pictures.

That said, he's not bad.  Some day I'll put together an entire album of his best work, but for now, I'll just give him this post while I continue to get my thoughts and pictures in order from our trip back East last week.

I present this picture he took of his cousin Alex completely unedited.  Sure it's a tiny bit blurry, but it's got good framing & composition and he really captured the moment.

Plus he didn't drop the camera in the pool, so I would say it's high art.
Posted by Unknown at 10:35 PM No comments: