Grouchiest Baby on the Block

You can hear it searing its way through the still Seattle evening air; a sound of such despair that you can only imagine the depths of pain from which it emanates.   It's the crashing sound of innocence snatched away, the soul-crushing wail of unbearable suffering... or it's the ridiculous over-reaction of a three-month-old being made to go to bed.

Yep, I'm pretty sure it's that last one.  And it's coming from my bedroom.

Let me tell you, this is some intense stuff right here.  If you ever want to question every ounce of ability that you possess to parent, in particular your ability to successfully raise a child without damaging it in frustration, come over to my house around bedtime.  Sure, she'll look happy while we're hanging out downstairs - like the happiest baby on the block, even - but if you make the mistake of mentioning how happy she is in public, or God forbid, blog about it, well... let's just say, I won't be doing that again.

She's always had a bit of a disagreement with bedtime, which we just chalked up to her not wanting to miss anything, but if that's the case, she REALLY doesn't want to miss anything these days.  It used to be that if she got into a crying jag, you could just wait her out.  Not anymore.  She's getting bigger, stronger and her aural attack endurance has greatly improved.   In fact, I'm pretty sure I heard her first words somewhere in tonight's session.  I can't be sure, but I'm relatively certain that I heard a bunch of "F" words, followed by what I swear was a very clear "YOU".  But maybe I'm just being over eager here.

This is a trying time not just for those of us tasked with putting her to sleep, but also to Finn.  He's probably not taking as many deep breaths as we try to simultaneously rock a baby and go to our happy place, but all of this wailing is definitely subverting his cultivated air of aggressive ambivalence toward his sister.   I can only image how difficult it must be for him to acknowledge her existence.

Thank goodness, Kitty turned me on to earplugs - aka, the Drunk Husband Snore Blockers (tm).  They really come in handy during bed time.  They don't exactly block the sound, but they sure take the edge off.  Kind of like whiskey, but for your bleeding ear-holes.  You're able to get past the thoughts of throwing the screaming baby out of the window and just think about possibly jumping out the window yourself.  Which is better, I suppose.

But if Finn's marathon newborn three-hour bedtime screamathons taught us anything, it's that this will soon pass.  Unfortunately, Edie's not the only angry one around the house these days.   Having spent the last four months in Denial, Kitty is fast-forwarding through the remaining four stages of Returning-to-Work-Grief simultaneously.  She's Angrily Bargaining with Depression.   I value both my marriage and my life very highly, so I'm not going to say anything here other than "I will happily support her however I possibly can through this time."

Now where are those earplugs?
Posted by Unknown at 9:29 PM No comments:

Happiest Baby on the Block 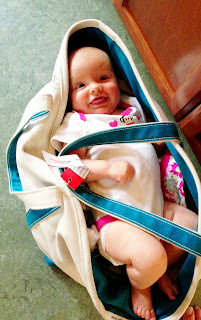 There's nothing more annoying than a sleep-deprived, grumpy, crying baby that sits around all day pooping in its pants.  But enough about me, this post is about Edie.

For someone who spends roughly 15 minutes a day sleeping, you'd think that she would be grumpiest person in the house, but nothing is further from the truth.  In fact, the only thing in the world that appears to upset her is when we're trying to make her sleep.  While the lack of sleeping is trying (for Kitty), there is something extremely lovely about a baby that spends 95% of her waking time smiling and laughing.

This is not how I remember Finn but maybe it's because she's a girl.  Going into this, there were three things that I can say that I knew about girls:  they smell nice, they're expensive to acquire, and they never poop or fart.   I appear to have nailed the first two, but I was WAY wrong about that last one and I also missed one:  they're super-extra-happy.  At least this one is, so I'll just assume they all are.

It's not like we invest in her happiness.  In fact, quite the opposite - this being our second rodeo, we're focusing on the important stuff, like strollers that look awesome and have iPod speakers for rocking out and video monitors that allow us to lazily watch our child cry in her crib while we watch TV in the basement, instead of the stuff that we spent money on but never used the first time around, like health care.  And car seats.

And she seems to dig it so much that she just can't help dancing for joy, as shown here.

Don't watch that for too long.  It has been shown to cause nausea & seizures in lab mice.  Seriously.

Of course, do you know who isn't upset by nausea & seizures?

And do you know who's not bothered by Nikki Sixx?  That's right:  Edie Parker, the happiest Motley Crue Fan on the block.
Posted by Unknown at 9:03 PM No comments: 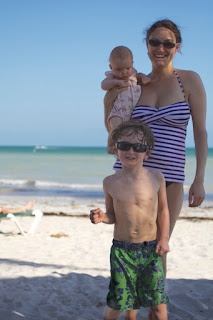 Twice as many kids apparently means twice as much Mother's Day, which is alright with me.  This Mom right here has earned it.  And it was good to see that the children both survived being left alone with me for more than the previous record of zero minutes while Mommy went off and enjoyed a spa day on Saturday.

I only wish that Finn and I had done a better job of washing her car on Sunday.  Turns out that your car wash quarters run out really quickly when you're preoccupied with taking turns spraying each other with the pressure washer and not actually spraying the car.

As usual, Edie did nothing to help.


So happy belated Mother's Day to all of the Moms out there!  Here's hoping your cars are cleaner than Kitty's.
Posted by Unknown at 10:12 PM No comments: 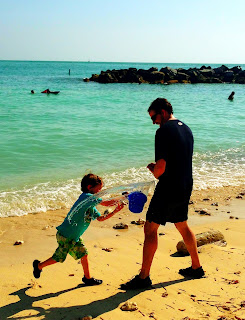 Finn and I had a conversation the other day - during an evening walk that turned into a dash back for
the potty - that started like most conversations do, with a frank discussion about how no one pees out of their behinds.  We agreed on that point, until Finn reconsidered.  He had remembered that he did know someone who peed out of their behind after all.

This struck me as unlikely, of which I informed Finn.  He pointed out that we've never seen Bigfoot, so we can't be sure that he doesn't.  He stated that he believed Bigfoot had to pee out of his behind because he lacked both male and female genitals.  Which he referred to by their proper names.

We both thought on this for a while as we walked.

Finn reconsidered.  He was now convinced that Bigfoot was both a boy and a girl and that he/she undoubtably had BOTH sets of genitals.  Which he/she wore on his/her sides... like holsters.

This is where the conversation started to get weird.  Luckily this is exactly the point that we arrived back at our house, so I picked up the mail and Finn ran up into the yard on his way to the bathroom.

We haven't discussed this since, and I hope that we never talk about it again.

But you know that I'll be thinking about it.

All the time.
Posted by Unknown at 9:47 PM No comments: 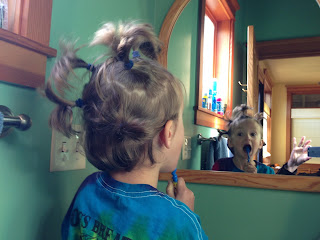 Let there be no mistake:  I love my son very, very much.  He has become the funniest person I know (occasionally intentionally)
and he continuously motivates me to become a better father, husband and person.

And he is driving me freaking nuts.

Before Edie was born, I was stressed out that Finn and I would struggle to find Daddy/Finny time once the baby was born.  Now I struggle to find an industrial solvent strong enough to remove him from me.  No longer do we need Daddy/Finny time, now we need Daddy Quarantine time, where I can find just a few minutes to hide out and remember what it was like to be a grown up.  Preferably with baseball on TV and  beer.

I blame Angry Birds.  Finn is severely addicted.  I'm sure he's got scar tissue on his brain from the EMF's that the iPad & iPhone are constantly beaming in there while he fires bird after bird at those despicable little pigs.  "Daddy, can we play Angry Birds?" is the first thing I hear in the morning and the last thing I hear before bed.  I'm pretty sure it's going to be the first complete sentence that he'll ever post on The Twitter. 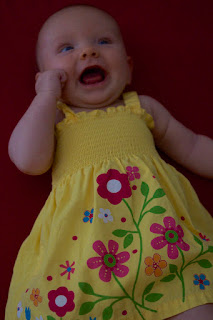 If Edie knew how to work her fingers, I'm pretty sure we'd have her looped into this party as well.  But until then, all she needs to do is sit there, smile and make all of the old ladies that stop by to ask what this baby is doing unattended while Finn and I play on my phone like junkies nearly keel over from cuteness overload.  That, and poop like a baby hippopotamus.  Which, incidentally, she is AMAZING at.  Daddy/Edie bonding time consists in large part of me hunting for poop in all of the sneaky places that girls can hide things - so many more wiping rules mean more time for us to really get to know each other.

I know that I'm going to look back on this someday and remember the playing of Angry Birds with him cuddled up in my arms for hours on end as the most amazing time of my life and that I'll miss it so much that it will hurt.  But for now, I just miss the halcyon days when he would bug me to watch TV in the basement.  By himself.

Now if you'll excuse me, I'm going to go back on everything that I just typed.  I just downloaded a new Angry Birds and I need to go find Finn and see if he wants to play.  I need some Daddy/Finny time.
Posted by Unknown at 2:59 PM No comments: