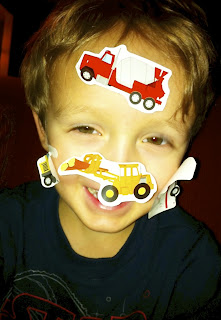 Kitty and Finn have been gone since Friday, visiting the Finn family back in Connecticut.  This is the first time since Finn was born that I've been home alone and I finally understand what people mean when they say, "The house feels so empty."

Well, as empty as a house full of pizza boxes, beer cans and two cats that like to wrestle on top of your head while you're trying to sleep can be.

To help fill that emptiness, here's a face full of stickers. 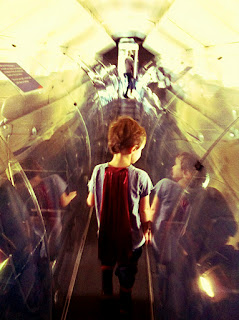 Finn loves money - particularly coins.  They're dirty, they make a lot of noise when it you shake them around, and if the thing you're shaking them around in happens to blow open, they create lots of really painful projectiles that make Daddy scream like a little girl.

Plus, he's now pretty clear on the fact that one needs money to purchase the things one wants.  Up until recently, the only actual enjoyment Finn got from money at a store was when I took him to cash in ten years worth of pocket change at the grocery store Coinstar machine.   Unfortunately for him, all he got out of that was a crash course in infectious disease, since those machines are disgusting.  But now that I'm regularly using the "I don't have any money" excuse whenever Finn senses that we have come within 10 miles of a toy store, he's starting to realize that money might actually be something that he wants to get his hands on.

So last weekend was a big event for Finn.  After scrounging up all of the shrapnel/coins that were laying around the living room, he used "his" money to buy something that he wanted at the store.  We dug through all of the coins before we went, sorting them out by type and value.  Somehow a 2 Euro coin had gotten into the mix and I had to explain that those didn't work here.  He looked at it in disgust and told me to, "Take it back to Europe."  I was so proud.

Once we got to the store, we had to figure out how we were going to spend the three dollars we had scrounged up.  He initially wanted a case of ice cream bars, but those were six dollars.  He then wanted a case of cupcakes, but again he was short.  Eventually, we were able to find a single cupcake in his price range and we let him bring it to the cashier and pay for it out of his "wallet", which is a lovely - and very dirty - Ziploc bag.

Now that we've got the exchange-of-money-for-goods thing down, the next step is to teach him the sense of reward that comes from using your money to buy things for other people.  Not interested in wasting any time, I started that lesson last weekend as well, when I made him buy me a cupcake.

I hope all lessons are that delicious.

The picture above is from the Boeing Museum of Flight, which Finn and I also hit last weekend with Archer & Cyrus.  That's a shot from inside the Concorde that they have on display there.  As you can see, it's not very big and they don't trust anyone to actually sit on the seats.  This is in contrast to the gift shop, which is enormous and which they have no problem putting all purchasable items directly within a child's reach.

The place was packed and I lost Finn momentarily.  As I was frantically searching for him, I could barely hear his little voice repeating "Daddy, Daddy, Daddy..."  This only made me more frantic, until I almost tripped over him, sitting on the floor, checking out a Lego airport set.  He looked up at me and in a very unconcerned voice asked, "Can you buy this for me?"

I think it's time for another cupcake lesson.
Posted by Unknown at 4:43 PM No comments:

That last picture really didn't do the situation justice. This is the picture Kitty just sent me.

I don't think I'm going home. There's no room for me in that house anymore. 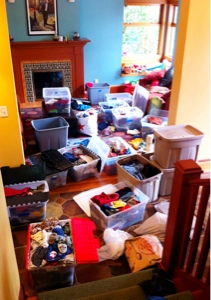 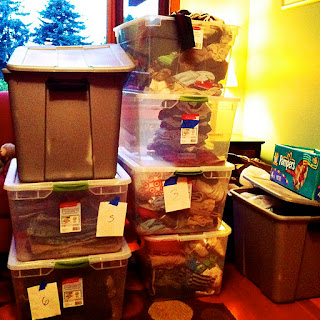 Hand-me-downs are great.  They save the recipient tons of money and they're a great way to recycle something that kids seem to burn through so quickly.  They're particularly helpful when your kids are Finn's age and younger - e.g., before they're old enough to resent them.  I figure that we've got a couple more years from which to squeeze the bags and bags of clothes that we're still getting from our friends before Finn begins to question why his jeans come pre-grass-stained in the knees.

Of course, the downside of this situation is that we've up to recently been in possession of the last boy amongst our friends.  That means we're at the bottom of the hill down which all boys' clothing currently rolls, resulting in a situation like the one you see at right.  This is Kitty's latest attempt to work through these bags and sort them into sizes so we can throw them all haphazardly back into a closet.

I liked hand-me-downs much better before they took over every square inch of living space in my house.

On the other hand, perhaps it's a good thing that we have so many clothes.  Apropos of nothing last night, Finn announced:  "Sometimes when I poop a lot, I need to wear shorts."

When pressed for an explanation, he would only repeat: "Sometimes when I poop hard a lot, I wear shorts,"  as if adding the word "hard" to the sentence would explain everything.

Given how well he poops, I hope there are lots of shorts in those bins.
Posted by Unknown at 5:31 PM No comments:

For the last three months, this has been Finn's favorite "book": 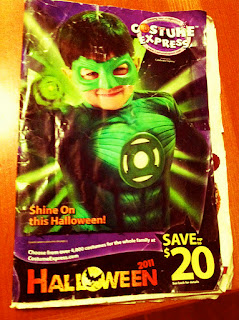 Seriously, for the last three months, Finn has not let this thing out of his sight.  Look how destroyed it is.  He brings it to school.  He asks us to read it to him.  He is clearly this costume store's biggest fan and key demographic, which is apparently why they sent this to him in July.

At first I thought it might be the catalog's disturbingly revealing little girl get-ups that he likes so much, but it quickly became apparent that his real crush was the cover model:  Green Lantern.  He's never so much as seen a Green Lantern comic book or watched a single episode of the old Justice League cartoons, but he's been unwavering in his assertion that he wants to be Green Lantern this Halloween.

As a former comic book junkie, this pains me.  I'd place Green Lantern one step above Aquaman on the Superhero Lame-scale.  At least when Entourage talked about doing an Aquaman movie, they were joking.  Finn clearly didn't get the joke.

No matter how hard I'd push for Batman or Star Wars, he's stuck to his Green Lantern guns - which is just a reminder of how much easier life was before opinions.  Of course we caved, and we got him his Green Lantern costume.  Sure that this would result in a Halloween like last year where he'd refuse to wear the costume the minute it arrived, we made him put it on last night.

Ryan Reynolds, eat your heart out. 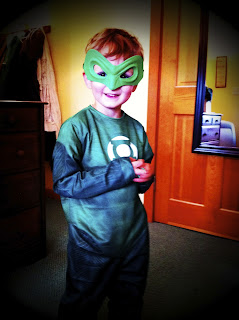 Don't tell Batman.
Posted by Unknown at 9:25 PM No comments: