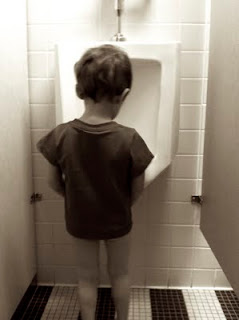 Finn's ear infections have been nothing if not consistent.  It's gotten to the point where the appearance of even a drop of snot from his nose means that we have roughly one week before an eardrum ruptures if left untreated.  We've long since passed even our non-hippie doctor's comfort level with prescribing antibiotics, so we attack his ears at the first sign of congestion with garlic drops and crank up the humidifier in his room.

The only thing we've found to have any success in putting them off is body work, and so it was that Finn and I found ourselves at the chiropractor this week.  As a master appointment-scheduler, I chose rush hour as the perfect time for our downtown appointment.  And Jena chose the moment I was trying to navigate through downtown to text me and inform me that Finn was wearing underwear, rather than the afternoon pull-up - as his deadbeat parents had not stocked his daycare bin.

No worries, we were still halfway potty-trained, right?  After making it up to the chiropractor's office and getting the bathroom key so that I could use it, I asked Finn if he had to use the potty too.

They sure were.  And given that I hadn't anticipated the underwear, I didn't have any backup.  Remember that scene in Mr. Mom when Michael Keaton is drying the baby off by holding him up to the hand-dryer in the bathroom?

I wish.  I would have given anything for the chiropractor's bathroom to have had a hand dryer.  Instead, I stripped Finn naked, smeared his pants with soap and attempted to furiously clean them with paper towels - taking a quick break to call Kitty to see if she had any motherly advice (nope) and to snap the picture above.  Do you know how long it takes to dry pants using just paper towels?  Let's just say that it's a very good thing we were 15 minutes early.

Once we got in to see the doctor, I wasn't quite sure how to bring it up without embarrassing Finn.  Of course, once El Dampo-pants had hopped up on his table, I realized it was already too late.  Fortunately, the doctor didn't seem to notice.  Or at least, he was nice enough not to mention it.

But back to the original problem, hopefully this chiropractic work fixes the ear infections because Finn is currently hemorrhaging snot.  After dinner tonight, he was urging us to come outside to see his "painting".  When I got out there, he was rubbing his nose all over the back of his chair.

In honor of the Yankees choking it up this weekend, I present this awesome video in the event that you have not yet seen it:


I'd like to think that I wouldn't be pestering Finn like this in the unimaginable event that he professed a love of the Red Sox over the Yankees, but I know I'm kidding myself.

I'd probably spit on him.
Let's hope that we never find out.
Posted by Unknown at 8:26 PM 1 comment: 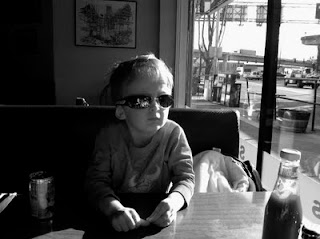 Few things in life are as satisfying for me as pulling an enormous dandelion from my lawn and discovering its 6 inch root. Every successful extraction without any root breakage is an event to be celebrated, as evidenced by my mad dash from the front lawn, up the front steps and up two flights of stairs to show the monster I pulled on Saturday to Kitty... who happened to be in the shower.

She was suitably impressed.
As the proud owners of the requisite Seattle lawn ladybug sign, we have eschewed pesticides and herbicides, which means it's me against the weeds. Mano a rooto. And with my trusty weed hound in hand, I prevail.
Unfortunately, my pleasure comes at my son's expense.  I've taken away one of the joys of spring:  making a wish and blowing dandelion seeds on a warm spring day.

You can play "mama had a baby and its head popped off" all you want, but blowing dandelion seeds in my lawn will earn you a night in the box.  I don't care whose son you are.

Luckily, once again, he's got school.  Check it out.

I'm positive Finn's secret was that he wished he could do this at home, but he didn't want to tell Jena out of fear of fatherly reprisal.

Smart boy.
Posted by Unknown at 9:20 PM No comments: 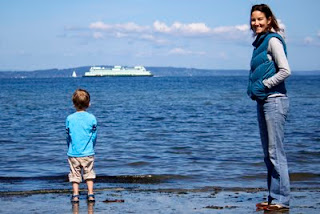 If there is one thing that consistently sets Mother's Day apart from all others, it's the absence of any mothers at the grocery store at 7 AM. That place looked like a single Dad support group this morning.
To the Ninja mother, who keeps the family fed, clothed and healthy, words cannot express what you mean to us. Luckily, that's why God invented flowers. And grocery stores that open at the crack of dawn.
Happy Mother's Day, to Ninja moms everywhere. If Finn had his druthers, he would have bought you all cards. And then he would have disregarded every piece of advice his collective fathers would have given him and told you all about it last night.
Lousy secret-keeper.
Posted by Unknown at 7:01 AM No comments:

A funny thing happened on the way to the taco truck... 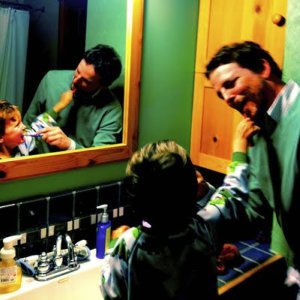 It's been a busy week. It started with Grandpa Finn's visit over the weekend, extended into a couple of 11 hour days at the office, included a dual-40th birthday party, the beginning of softball season and a company Mariners outing. By tonight, all I wanted to do was hang out with Finn.

With Kitty working late, we were instructed to head to the taco truck - our current favorite West Seattle fine dining establishment - for dinner. As I was picking Finn up from Jena's, he asked if I had to go to the baseball game. I told that I wouldn't be going anywhere tonight, that I just wanted to hang out with him.
I asked him if he wanted tacos and he said no. I asked him where he wanted to go for dinner. He replied that he didn't want to go to dinner. He just wanted to hang out with me.
That earned him a trip to Giannoni's for pizza and a Mighty Machines Power Pack at Target.
I don't care if he was playing me. That was worth it. I even let him brush my teeth as I tried to brush his, as seen above.
And yes, it is as fun as it looks. Until he stabs you in the back of the throat.
Incidentally, as a YouTube digger/firetruck/garbage truck addict, I thought he had seen them all. That is, until I found this. I think it literally blew his mind, particularly because we watched it right after his third birthday. Freaky.
Posted by Unknown at 9:48 PM No comments: