Finn's been telling jokes since he could talk.  Unfortunately, they're terrible.  His timing is bad and he doesn't seem to understand the concept of a punchline.

So it is with great pleasure that I present his first structured and entertaining joke.  The delivery is still rushed and it's followed by some weird little punchline dance, but it's progress!

For those having trouble deciphering this brilliance, here's a transcript:
"What do you call a deer with no eyes?"
"I don't know, what?"
"I have no idear!"
[No transcript available for what follows the punchline.  You'll need to fill those blanks in yourself.]

(Video here for email recipients.)
Posted by Unknown at 9:18 AM No comments: 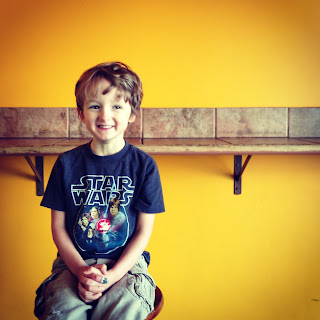 And so Finn was introduced to Pink Floyd.  After finding & playing the aforementioned sound clip on YouTube, I informed Finn that perhaps we should watch The Wall so he could see the whole thing.

"Daddy, is that appropriate?"

Hm.  Now that you mention it, it is most definitely not appropriate for a four year old.

Good thing he's keeping an eye on these things.  Somebody needs to be driving this ship while Mommy is otherwise occupied growing the next non-dinner-eater.
Posted by Unknown at 9:37 PM No comments: 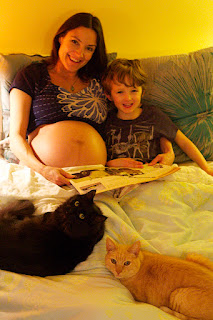 When we started this blog, it had two goals:
I think we've succeeded quite well on both counts, but we're nowhere near done.  In general, Finn's an extremely adorable, smart and hilariously funny kid.  But that's boring to write about.  So let's talk about what he's like the rest of the time: spoiled, refusing to help out around the house, no matter how easy or trivial the request is - seemingly on some sort of I'm-a-jerk principle.

Rather than spend five minutes helping to clean his toys up, he'll spend half an hour arguing about it.  Rather than help us set the table, he'll lay on the kitchen floor crying for fifteen minutes about how hard it is to put a fork on the table.  Once he's cried himself out, he'll ask me to stop setting the table myself so I can play with him.  Then another fifteen minutes of crying about how I've hurt his feelings because I won't.

In a moment of frustration, Kitty asked him why he was choosing to be so difficult about these things when it would be much easier to just help out.  His response:  "Sometimes I just make it hard.  I don't know why."

As shockingly mature a response as that may be for a four year old, it doesn't change the fact that this situation is not optimal.  Patience is called upon with frequency.  Sometimes successfully.

But we haven't given up or given in.  We continue to try to find ways to draw the connection for Finn between helping around the house and getting others to help you.  In other words, we bribe him with television.

Lo and behold, it's working.  He now is eager to help out, if it means he can get another twenty minutes of Jake and Neverland Pirates or Phinneas and Ferb.  He starts asking how he can help on the way home from school.  This is great, as long as we have something for him to help out with.  Which I was surprised to discover, I don't always have.

Seeing that I had come up blank the other day, Finn made a suggestion.  He asked, "How about I help by not picking my nose any more?"

That sounded pretty good, but before I could accept, he added, "Actually, I don't think I'll stop picking my nose."

We were so close.  If I can't get him to stop picking his nose through television bribery, I'm afraid all hope is lost on that front.

Sorry Finn's future ex-wives.  At least he's setting the table!  Though I'd make sure he's washing his hands first... 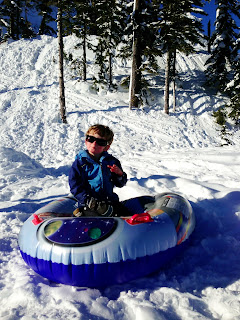 According to updated interpretations of the ancient Mayan calendar, it turns out that the world will actually be destroyed in exactly one month.  Coincidentally, that is when the Rookie is scheduled to arrive.

Given that I had done exactly nothing to prepare for this prior to last weekend, that means the time on the clock now is roughly freak-out-thirty.  With the holiday houseguests departed from our guest room, I spent the weekend reconstructing all of Finn's old baby stuff in the new nursery and carting hundreds of pounds of wood and hardware up and down two flights of stairs, while simultaneously knocking holes in the drywall and bruises on my shins.

While I now spend the new few days spackling the walls, Kitty is growing increasingly concerned about the actual arrival.  Given what happened the last time around, this is understandable.  However, we're going a different route this time.  We're using this newfangled thing called the "hospital" (sp?).  I hear all the kids are doing it these days.  Of course, now that we're leaving the house, that's a whole new set of things that we're going to have to factor in.  Exotic things like driving directions and hospital bags.  This is getting complicated.

But these are the least of Kitty's concerns.  She's just sure that this labor is going to go for 37 hours, like the last one.  Everyone we've talked to insists that almost never happens with a second time mom, after which Kitty informs them (or me, after they've left the room) how wrong they are.  I helpfully pointed out that her negativity will effectively guarantee that this is another long labor.

Once she starts talking to me again, I'm sure she'll agree.

Finn still appears to be handling the pending arrival of the baby with a positive attitude.  He spends far more time rubbing his mom's belly and talking to the Rookie than I do.  A fact certainly not lost on Kitty, though so far she's been more or less quiet about it.  Because she knows aliens living behind thin walls of skin inside peoples' bodies freak me out.  And she's accepted that.

Aside from expressing concern that his new little sister might be "toxic" (his words), Finn is now curious about how many babies mommy is going to have.  I've informed him that this is absolutely, definitively, most likely the last one that mommy is going to have, but he's requested 100 more babies.  He actually wanted more than 100, but that's as high as he can count.

I hope that doesn't happen.  But if it does, I'm going to need a LOT more spackle.
Posted by Unknown at 9:13 PM No comments: