State of the Ninja

Since I've really got nothing new to report at the moment and since I know that several thousand of our most loyal readers get their Ninja News via email or RSS reader and therefore don't get to regularly check Finn's growth chart, I figured I'd give y'all an update on Finn's 12-month checkup.

As potentially traumatic trips to the doctor go, this one was a piece of cake. There were no shots to give and the boy was able to make it the whole appointment without peeing in the toy box (again). Dr. Fiala even commented, as she was holding a happy baby in her lap, how nice and easy going he is. Contrast this with Tango's & Cash's vet appointment last weekend, during which Tango got so upset that he peed and pooped on me.

I don't think we need to keep cats vs. baby score anymore.

Finn got another clean bill of health. He's still not fat - coming in around 40th percentile - but at least his head is still enormous (90th). We were disappointed to learn that he's dropped from the 90's down to the 70's in length, so we'll be working on that piece before the 15-month appointment. I know he can do better next time.

The best news came in the mail, when we learned that Finn had tested negative for Lyme Disease. This was a concern due to Kitty's Rampant LymeTM 1 and the fact that she is constantly biting him. Her Lyme doc gave him 50/50 odds and we had to go through an incredibly traumatic blood draw, but he came up clean. Now we know that there's at least one person in the family that doesn't have Lyme Disease2, so that's nice.

To show just how far he's come in 12-months, here's a pic of the Ninja rekindling an old flame. Who says you can never go bluebird again? 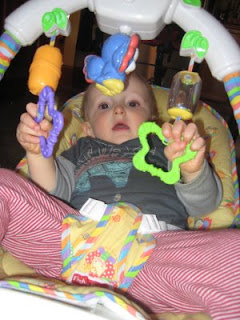 1 The official diagnosis. Apparently it's just like regular Lyme, but more rampanter.
2 I'm terrified of needles, so I refuse to get tested. I'm treating my possible infection with 100 cc's of ignorance.
Posted by Unknown at 8:39 PM No comments:

Please forgive the mess in our bedroom. It's Rosa's month off.

Posted by Unknown at 5:52 PM No comments:

Since we're big fans of waging wars here at Fussy Ninja HQ (a Ninja's gotta stay on his toes!), we've decided to wage a new one on eating. As previously mentioned, the little angel has decided that dinner time is his mortal enemy. Breakfast time? Big fan. Can't eat his oatmeal and bananas fast enough.

Dinner time? Not so much1.

It's not that he hates everything. He totally digs toast, cheese, and Veggie Booty2. It's when we try to introduce something green that he breaks out one of his two signature moves:

To compete with these, we've tried a variety of tactics, starting with an "elimination" feeding whereby we slowly introduce/remove a variety of factors to the dinner equation to determine how he will react. Toys work well as a distraction, but since they spend equal time in his mouth with the food, they quickly get a little gross. After much trial and error, we've found the best results with a good ol' fashioned floor dinner.

We sit on the floor with the food in our laps and let him run around. He will invariably do a couple of laps around the kitchen, then look back over his shoulder at us, turn around and while opening his mouth, run directly onto the spoon with a big smile. It's kind of like feeding a dolphin at Sea World. You just have to be sure not to stab him in the back of the throat with the spoon.

We're also experimenting with meditation and yoga to help calm the dinner beast. 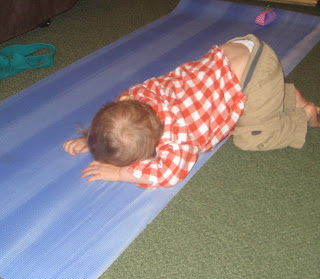 1 Lunch time? No idea. That's Jena's problem.
2 Because the only good pirate is a chewed-up pirate.
Posted by Unknown at 8:25 PM No comments: 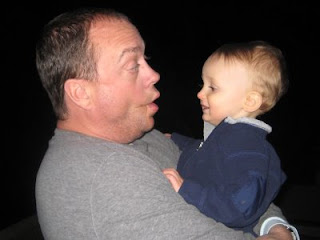 Now that he's a year old, we've decided that we need to set personal objectives for Finn to ensure that he doesn't catch a crippling case of the lazies - an affliction that has plagued his father since he was in diapers. Plus, now that we're serving him real food (not that he's eating it), he needs to start earning his keep.

The only skill he seems to have really nailed at this point is house-destruction, so we decided to visit some new parents in LA for Easter weekend to test their babyproofing skills.

Turns out they really needed our help. Sure, the Calofs hid behind the excuse that their son Quinn is only a few weeks old, but just because he can't walk doesn't mean he can't grab your crystal coasters and start slamming them into your glass coffee table, does it?

Well, maybe it does. But Finn sure was good at that part. Within 5-minutes he had identified every possible chokable or stabbable in the house. He also found the collection of old 45's - records, not guns. Though guns may have been preferable to Starland Vocal Band.
Since Finn was so efficient, that left us nothing to do with the rest of the weekend but soak up some sunshine, catch up with friends and watch lots of baseball.

Here, we've shown the Calofs that the best way to secure Quinn from harm is to swaddle him with a cat. That way if you drop him, he'll always land right-side up. 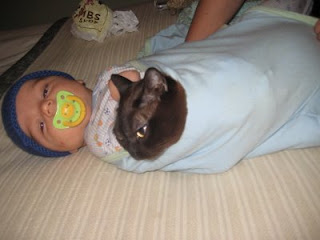 Genius.
Posted by Unknown at 9:52 PM No comments:

We have a Winner!

Has it really be 10-days since the last post? Wow. After a year, I'm apparently SO over this blogging thing. No, that's not true. I've got to win back St. Helena first.

Maybe this big announcement will bring them back:

In the War of the Brains, Finn has finally emerged victorious over the cats! Yes, it's true. No, this does not mean he now has figured out how to poop in a box that I only need to clean once a week. But it does mean that he now clearly understands what we're saying and reacts accordingly.

The other day when I got home from work, Kitty asked Finn to go bring me his ball and he walked into the other room and reached under the sofa to pull out the ball. The cats have never done that!

And it gets better: if he's refusing to eat and is crying (read: every day) and we ask him if he wants milk, he can easily find his sippy cup and angrily knock it to the ground!

Here's a picture of the new one-year-old definitely not crying or angry while on the slide with mommy. Perhaps we need to move meal time to the park. 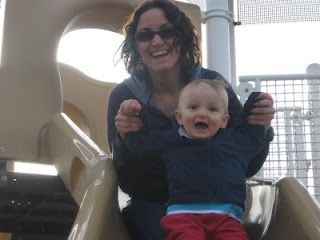 Posted by Unknown at 4:40 PM No comments: