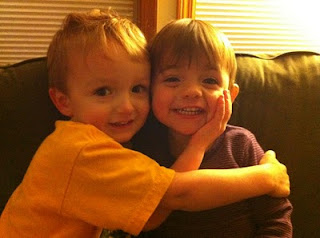 After a week in Belize without Finn, I now know why parents bring their kids on vacation. It's been a long time since I've been that consistently hung over. I need a regulator, in the form of a two year old that gets up really early and is ready to play. Toward the end of the trip, Kitty and I vowed that we would never take another "adult" vacation again without Finn - particularly not with Holly & Rob.

Now two days back in the house with said whiny two-year-old and I'm already booking a week in Djibouti for next month.

Thanks to the wonders of technology, we were able to keep up with Finn's exploits via video chat on our phones each night and it was pretty easy to see that he was not having a terrible time - as evidenced by the photo above. And while it crushed us to know that we missed Snowpocalypse 2010 while we were stuck on the beach, knowing that Finn was hanging with Layla, Jena, Scott & Grandma Martha was very comforting.

And as expected, upon our return, Finn was not exactly rushing out the door to get back home. After a quick hug, he immediately retreated back to Layla and we had to hang around for 15 minutes before he was comfortable.

Getting him into the car was like trying to get a skittish dog to come up and lick your hand. Except with more whining.

So now it's back to the grind and the start of what is sure to be my favorite season for years to come: the season of threatening Finn with no Santa.

By the time you read this, we'll be in Belize trying to drink away the feeling that we're terrible parents. So that you, my faithful readers, don't suffer, I've preloaded this blog entry to post on Monday. Enjoy.

This is a typical web-surfing session with Finn. It begins with me trying to read the news or type hilarious blog entries, but quickly turns into a demand to look at pictures of firetrucks, garbage trucks or helicopters.

I felt like his enjoyment of these sessions was worth sharing. Of course, the minute I turned off the camera, he exploded with a FIRETRUCKS! so big that our lights went out. One of these days, I'm going to catch one of those. 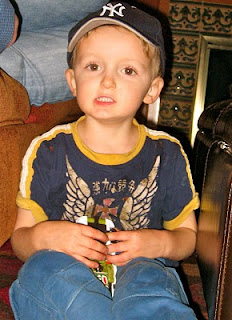 Actually, the first part is not entirely true - I do have a pretty good idea of when it happened. It was roughly about the same time that Finn's primary mode went from "unfathomably adorable" to "constantly whining & crying".

Of course, we know how do deal with whining, being adepts at Positive Discipline. It's all about giving the child choices. For example, I'll say: "I like to give ice cream to kids that say 'please'." At which point, he can either decide to say 'please', and get ice cream, or he can get yelled at.

But that's an easy one. The right answer doesn't always result in ice cream. For example, the other day, Finn developed some sort of "crying injury" in his general foot area. To try to get him to calm down, I offered him the following options:
It worked. He stopped crying. Very effective. Next step, "I'll give you something to cry about!"

I'm getting good at this, but I'm not going to get a chance to flex those yelling muscles today. We take off for a week in Belize tomorrow and Finn's not invited. He'll be crashing at Layla's, which will cut down on his morning daycare commute considerably.

When we booked this trip a few months back, the idea of spending a week living like a grown-up in a tropical location sounded like heaven, but now it sounds like sad. This will be our first big trip away and all I'm thinking about is how we're going to video chat with Finn from Belize. And I'm equally certain that upon our return, Finn will have absolutely no interest in coming home with us and will insist upon living at Jena & Scott's house with his girlfriend.

Excuse me, I think I need to go yell at myself until I feel better.

Posted by Unknown at 2:39 PM No comments: 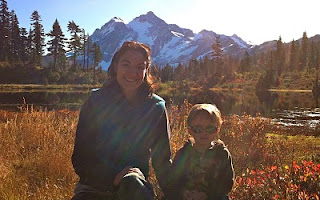 Daddy: Come on up and I'll read you a story.
Finn: I don't want you to read me a story. I want Mommy to do it.
Daddy: Come on, I want to read to you.
Finn: No, you sit over there (points to corner) and Mommy reads.
Daddy: But I want to participate!
Finn:

Truthfully, I'm just happy to be on the team. Even if I do spend most of my time on the bench.
I'll happily accept my purple "Parcipitant" ribbon.
Posted by Unknown at 8:53 PM 1 comment:

That's what he said! 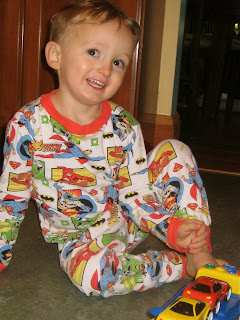 Given the fact that I apparently can't be counted on to regularly wax philosphopical on the topics of wetting one's pants on these pages, I figured it's time to introduce a new, lower-impact-on-my-scarce-brainpower feature to the blog:
"That's what he said!" Or, more commonly, TWHS!
This will be the latest in a string of parental cop-outs, coming rights on the heels of "Punishment via DVD."
Of course, given that he's still only two and a half and conversing with him can at times be like talking to a cab driver in a foreign country about the pretty white tigers at the Buenos Aires zoo, since you've got nothing else to say, as you spent the majority of your time in the Spanish clash preceding your visit instructing the teacher to focus just on teaching you how to haggle (Muy caro!), this will also at times be referred to as:
That's what (I think) he said! Or TW(IT)HS!
Most of these quotes will likely come from our daily update from daycare, where all of the kids are asked to recount their favorite part of the day. While normally, Finn's response predictably focuses on trucks, firetrucks, or words that include either fire or truck in them, occasionally you'll be surprised with something interesting, like we were yesterday:
"I sat in puddles."
I can see how that might be the favorite part of the day for a kid that clearly doesn't mind wet pants. At least that helps explain how his pants did get so wet. Before I read that, I was impressed. And worried.
And as an added bonus, allow me to save you the money on adult Spanish lessons: "Los tigres blancos son buenos!"
You're welcome.
________________
I just read that Dave Niehaus passed away today. This is a sad day for baseball, a sport where good radio/TV announcers are hard to come by - even in the Bronx, where money is no object. The week I moved to Seattle was the week that the Mariners beat the Yankees in the 1995 ALDS. I had mixed feelings about it then - I met Tino Martinez and Vince Coleman (shook my hand, sans firecrackers) at a bar celebrating the Mariners win, so that was nice - and I still have mixed feelings as they've replayed Edgar's hit every 15 minutes for the last 15 years on every Seattle baseball broadcast, but I always liked hearing Dave's voice.
RIP, Dave Niehaus. Fly, fly away.
It's small consolation for such a loss, but at least Joe Morgan finally got fired this week. That helps.
Posted by Unknown at 6:15 PM No comments: 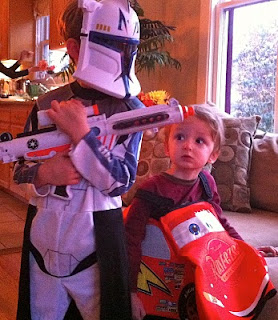 So it turns out that even after all of my complaining about his costume, it did meet the primary objective that I ultimately hold his costume's accountable against: it scored me lots of candy.

I'll be slowly draining the plastic pumpkin while drip-feeding him a piece of candy a day until surprisingly it's all gone. By about tomorrow.

Once again, it took him all of one house to get into the spirit. From there, it was off to the races, trying to keep up with the big kids. He even managed a "trick or treat, smell my feet, give me something good to eat," which his mom had been training him on all evening without any prior success.

What he didn't do so well:
After that meltdown, we needed to reinforce with Finn that Halloween was over and that it was time to go home and get ready for bed. He told us that was OK.

After all, he informed us, "Christmas is in two minutes." 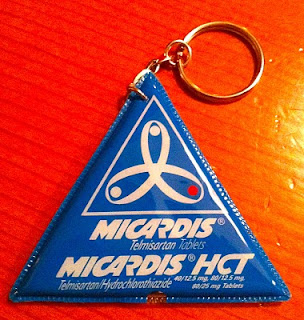 Who gives out a keychain for a high-blood pressure medicine to kids on Halloween, even if it does double as a sweet flashlight? I thought the razor blades that I was taught to fear in the candy were bad, but people in West Seattle are clearly SICK!
Posted by Unknown at 8:53 PM 1 comment: