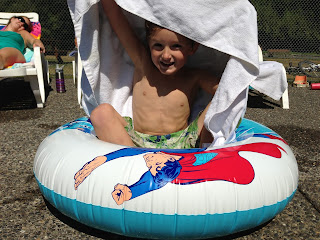 Remember when I said that I was going to build a fort for Finn? Boy, was that a dumb thing to say. Once I walked away from the graph paper mock-ups that we had created and actually thought about it, realizing that anything I would build would most likely collapse on his head and/or significantly decrease not just my own property value, but also the property values of the entire city of Seattle, I panicked. That's a lot of pressure.

To buy myself some time, I've been creating construction delays like a good little general contractor.  Initially it was going to be a treehouse, so I explained that I'd need to contact the city to discuss permitting for a treehouse in the city limits. Rather than call or stop by the permitting office, I really tried to screw myself by emailing them. I thought that would save me the rest of the summer, but the stupid over-performing city permit office got back to me immediately and said that a treehouse was fine.

But then they mentioned that there were some trees that I couldn't build in and lo and behold, the tree in our backyard was one of them. Thank you, "Exceptional Tree" status!

This didn't dissuade Finn, however. Perhaps we shouldn't have had such a successful brainstorming session when planning his fort, because he decided he was fine if the fort was on the ground and only  wanted to know when his fort - complete with refrigerator, rocket launcher, fireplace and race car garage - was going to be completed.

This has been a very quick, and likely expensive, lesson in child-expectation-management.

Fixing this the only way I know how, with money, I recommended that we head down to the Rainbow Playsets outlet and pick out an awesome playset with a slide, swings and a fine cedar finish that would weather the Seattle winter well and not require any additional maintenance that I'm unlikely to perform. Finn jumped at the opportunity, so I excitedly loaded the family in the car and headed down south to the land of the magical playsets. When we got there, the friendly gentleman instructed us that Finn could play on anything on the lot while he explained to me how many mortgages we would need to take out for just a basic sandbox. And I was fine with that. Finn immediately took off running, swinging & sliding.

After scoping out which ridiculously colorful monstrosity would fit in our yard, I hunkered down in one of the luxury-sedan-priced models with a little fort in the base to ask him which one he wanted most for home.

I'm pretty sure Zillow is going to devalue my house just based on this blog post, but it looks like we're building a fort. If anyone has a line on a good fort refrigerator, let me know. Looks like I'm in the market.
Posted by Unknown at 9:27 PM