As previously covered in extensive detail, mealtimes around the dojo are always an adventure. Some days, he's a great eater. Other days, the neighbors must hear him screaming from our table. Even the days that he does decide to eat are filled with questions.

Will he like it? What's the first thing he'll throw at me? How much of this will actually make it into his mouth? How much will stay in his mouth?

Finn has been labeled a "mono-eater" by his daytime mommies, meaning that no matter what they put on his plate, he'll typically focus on just one thing. This does not lend itself well to the idea of a balanced meal, which in turn, does not lend itself well to a happy Mommy. Kitty is constantly working to find the perfect balance between meals that we all enjoy and that also cover at least two of the five food groups (we count crayons as a food group).
The other night was one of our go-to meals - kimchee soup. The soup uses leftover braised pork rib meat, which Finn is a big fan of, but what makes it extra goutilicous is the incredibly rich braising liquid used in the broth. I can feel my joints tightening up just typing this.

This is what it looked like coming off the stove. 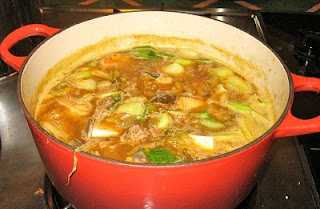 And this is what it looked like 10 minutes later, after Finn applied it liberally to the front of his shirt. And pants. And socks. 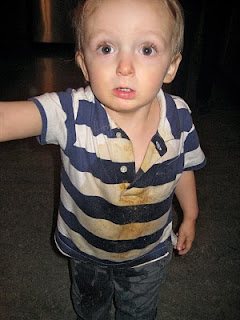 Now a lack of proper spoon skills certainly contributed to this particular issue, however it also highlights another problem that I've alluded to before. No matter what we do, we can't keep him from spitting his food out down the front of his shirt. The sad part is that we're certain that we contributed to this behavior by giving him a great spittoon via that trough bib that we used to love so much. Breaking this habit has proven extremely difficult, which is unfortunate because nothing says class like loudly reminding your child to spit his food into his hand at the restaurant.
Of course, none of this bothers him. He's the happiest kid in the world as he's spitting his food all over the place - which makes it very difficult to stay mad at him. But I'd be the happiest dad in the world if he'd just learn to use the vacuum.

We're working on it, though you can tell from that posture that he's not taking his lessons very seriously. 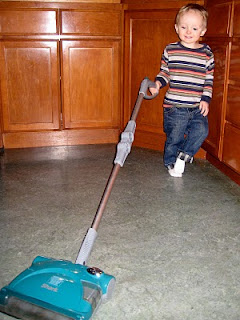 This delights me to no end... love that he's into cleanin' up at such an early age! Aunt Stacy is uber proud!