Talkin' in the new year 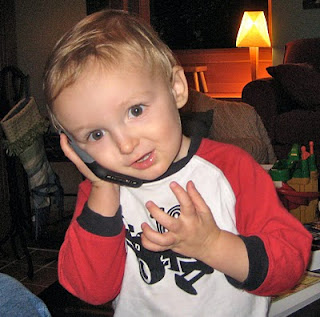 As a reward for my incredible solo Daddying of the last month and a half, I was given some bachelor shore leave for new year's eve and spent it up at the cabin skiing with Holly and Rob. When I left, Finn was talking up a storm - flexing his Frankensteinian pronunciation - but his conversations were all limited to just a couple of words thrown together, like "Call Layla" (as you can see him doing to the right) or "Elmo Big Bird" (repeated every 15 seconds; what was I saying about wanting a child that watches TV?).

And so it was with great surprise (and even greater hangover) that I returned from the trip over the weekend to find Finn had really stepped up his talking game. He continues to point out every car in the universe, he tries really hard to count past two and he still works diligently at identifying the colors that aren't yellow, but to all of this he has now added the following complete sentences:
It's the last one that's driving me craziest, of course. Doesn't he realize that we CAN'T watch baseball?! He's so cruel.
But in the end, my favorite new phrase would have to come down to one of the following:
I know. It's a toss-up. I love them both equally, as they're both equally true.
Now if you'll excuse me, I'm engaged in a wicked game of chicken with our neighbors to see which is going to be the last house in the neighborhood to take down their Christmas lights. And these guys are good; I think they've had their lights on continuously since 1987. I may be overmatched.
Posted by Unknown at 8:56 PM

How fitting that your post includes an Elmo reference. Just yesterday, Millie was looking through 'pic-tu' (what she calls Christmas cards from friends/family). She likes to flip through them and name those kids/pets she knows, and ask, "Dat?" for those she doesn't. When she got to your card she said, "Sitsitz (Santa) and Elmo (Finn!)." Maybe it's the red vest? Hilarious!