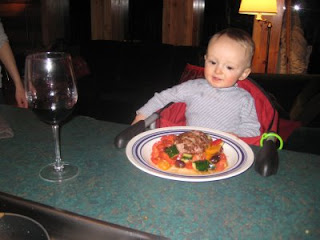 I know that I had promised the final chapter in the Finn Feeding Chronicles, but I must lead off by saying that I am a mere shell of the man I was when I wrote that first part (as small as it was). Kitty took off on a business trip to California last night, which is her very first time away from the Little Bud other than her birthday when he had an overnight sleepover at Torry's house -- all of 4 blocks away. This was a very emotional moment for the Mommy and a slap in the face with a poopy diaper for the Daddy. Turns out the Mommy is an integral cog in the machinery of the 2008 Ninja model of baby. I shall never again overlook or understate the importance of the Mommy to the efficient execution of the daily undertakings, in particular the morning departure and bedtime rituals.

Kitty, you're amazing. Don't ever go out of town again. At least not until Finn is of legal drinking age, which I'm hoping is soon lowered to 11-months.

But back to the point...

As I was saying, while the dinner menu has expanded exponentially, happy eating is a rare occurrence these days. No matter what kind of delicious spread that we put in front of him (like the one above... OK, maybe that was our dinner, but you get the point), unless it includes toast or cheese, it only takes about 5 minutes for the issues to begin. It starts small, with maybe a shake of the head or a craning of the neck away from the spoon but soon degenerates into a full-on Cry Fest, the likes of which have not been seen since Ricky got voted off of Season 4 of Project Runway. The good thing about a crying baby is that its mouth is open and prime for some spoonfuls of food. The bad thing about violating a baby's mouth like that is that the food very rarely stays in there for long. 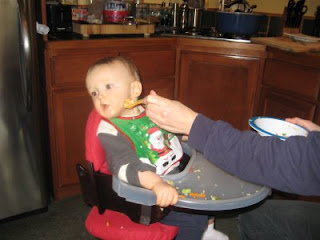 Turns out that cats are not nearly as good at licking up floor food as dogs. Maybe we just need better cats.

Of course, there is a big, shiny bright spot to having the boy all to myself this week. One word, all in caps: PIZZA! As I believe I've discussed previously, I've been eagerly anticipating the day when there was another lactose & wheat tolerant member of the family to split a pie with and it looks like that day is here.

At least not until Mommy gets home.

Behold the Ninja's first bite of pizza. And behold the feeding trough around his neck. That thing has reduced floor waste by up to 87.5%. Who needs cats? 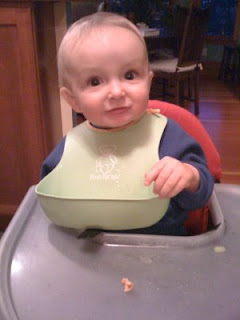 1 Thanks for that image, Kate.

I was also on the business trip with Kitty and it was my first time away from two-month-old Lilah Eve. We celebrated with overpriced hotel cocktails and, of course, spent nearly the whole time talking about our kids.