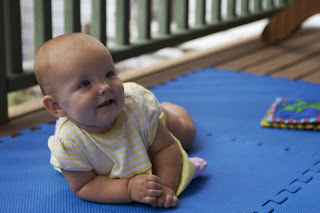 My laziness is well documented.  I have enough of a problem just moving my fingers to type this sentence, to say nothing of the challenges that I have walking up and down stairs.  Unfortunately for me, that ridiculously difficult task has only gotten more challenging as we've re-entered the darkest of days...  the Babygate Era.

Much like her brother before her, Edie has proven to be extremely dissatisfied with sitting in one place and has transitioned quickly into a crawling machine.  She's still struggling to get up on her knees, so they're mostly army-crawls, but they're deceptively quick.   If she's not lying on her stomach, screaming with her arms & legs furiously shaking in the air like an angry beached-whale, or relaxing in repose, as pictured above, she's now flopping around the house like a small-object-hungry baby seal.

This means that I either need to vacuum much more frequently to get all of the fuzz up off the floor or I don't need to vacuum at all, since she'll either gobble it up or Swiffer it in her onesie.   I just need to decide which I value more: her health or my free time.  I'll need to think about it.

It's not just her esophagus at risk, it's also Finn's Lego wonderland.  The southwest corner of our house is still Finn's undisputed territory and while it's elevated above her reach at the moment, that's not going to last.  We're going to need to either move Finn to the basement, which he won't like, or we'll need to find a way to fence him in like a zoo animal, which I'm not sure I'll like.  I predict it will increase whining on all ends by roughly 300%.

Then again, maybe we can make that work.  If I can find a way to install a zip line or giant swing between Edieland and Finnville, then we all win.  Yeah, that's the ticket.  It's just crazy enough to work.

I'll get to that right after I get done building the fort.
Posted by Unknown at 11:28 AM